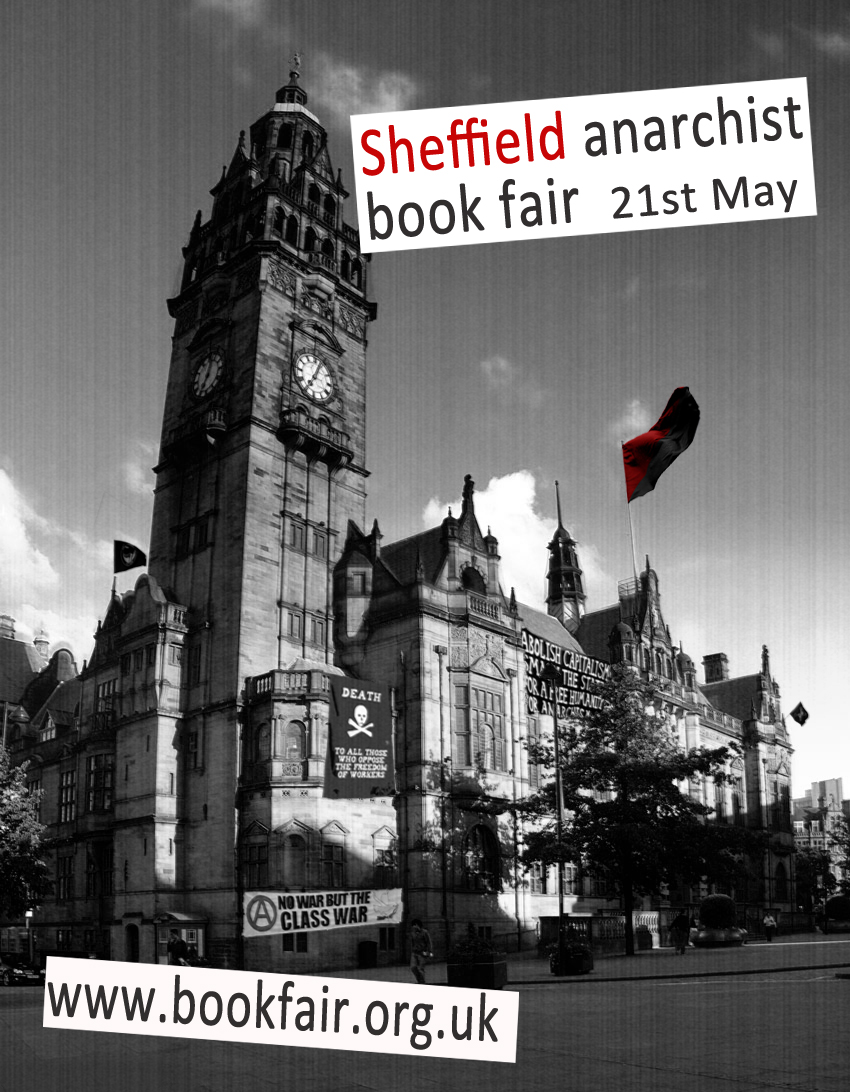 We live in a time of crisis. An economic crisis, an environmental crisis and, if the government gets its way, an impending social crisis. When the only thing that is on the political agenda is cuts, cuts and more cuts it is all the more important to explore the alternatives. And there is an alternative - anarchism.

Anarchists argue we need a society ruled not by profit and greed but organised on the basis of social solidarity and human dignity. If you’re a hardened political activist or just a bit “anarcho-curious” we welcome you to our second annual anarchist book fair. Events like this have run for years in cities from San Francisco to Zagreb. They’re a great starting point into the ideas, activism, ethics, creativity and history of the contemporary anarchist movement, with publishers comix, zines, film, art, food and fun stuff.


It's that time again! Just over a month until Sheffield's second annual anarchist book fair. This year the event will be held Saturday 21st May from 10:00 - 18:00 @ Bank Street Arts, 32-40 Bank Street (A much brighter venue than last year!). There will be meetings and presentations throughout the day as well as some film screenings (a new feature for this year). We will also be holding a social/fund raiser in the evening if people are able to stick around (details will follow shortly). Rates for stalls are £15 for groups/campaigns and £20 for book stalls/distro's (half price on your second table). Please contact us in good time to reserve your stall. We also welcome proposals for meetings, workshops or presentations from groups and individuals. If you have a proposal please email - sheffield(at)bookfair.org.uk We aim to facilitate as many as possible but, as was also the case last year, space will be allocated on a first come, first served basis.

Everything you wanted to know about anarchism/libertarian communism but were afraid to ask. A panel discussion featuring members of the Anarchist Federation, Solidarity Federation and the Commune.

All three books are edited collections of contemporary anarchist theory, with contributors from around the globe offering some unique and original perspectives on anarchism. Come and speak to the editors about these new works.

Sheffield Social Centre is an ongoing project to build a permanent anti-capitalist space in the city. Come and talk to some of the activists involved about the history of the project, how and why you should get involved and their plans for the future.

From 1811 to 1813, thousands of textile workers in Nottinghamshire, Yorkshire and Lancashire rose up against the mill owners, by smashing the power looms which were throwing them into unemployment and starvation. In 2011, anarchists, labour organisers and green activists will be celebrating the 200th anniversary of the Luddite rebellion and planning resistance to the new industrial revolution we see today. This workshop will look at the expansion of corporate power through nanotechnology, biotechnology, surveillance, information and other technologies, and at how we can resist these developments in the spirit of our comrades 200 years ago.

'The past is not dead, it is living in us, and will be alive in the future which we are now helping to make.' – William Morris

Over the past decade or so a 'movement of movements' ripped across the planet, forging new alliances and inventing new worlds. That cycle of struggle seems to have drawn to a close. Instead, in the face of a new round of austerity – and a deepening crisis of social reproduction – we are glimpsing the emergence of new struggles and new antagonistic social subjects.

What is the relevance – if any – of the politics, practices and problematics of the 'counter-globalization movement' to these new struggles? With the future unwritten, how can we best prepare for an event – or events – of unknown shape and time of arrival? What is the relationship between intensive collective experiences – 'moments of excess' – and 'everyday life'? And can understanding these questions help us develop a new generation of struggle, allowing the past to 'live in us', whilst preventing it from weighing 'like a nightmare upon the brains of the living'?

Anarchism is often unthinkingly dismissed - or uncritically embraced. This session takes a provocative look at anarchism, challenging a number of ideas taken for granted by most anarchists, to see how feasible - and desirable - anarchism really is.

LaDIYfest is a community based, non-profit, volunteer run ‘Do It Yourself’ (D.I.Y.) festival of music, art, film, discussions, workshops and skill-shares. It aims to showcase the skills and talents of a diverse group of feminists working in the arts, community building and activism. The first Ladyfest was held in Olympia, WA in 2000, and since then, women have organized their own festivals in cities across the globe, from Atlanta to Zagreb - and now we want to bring it to Sheffield!

Whether you want to get involved in organising and running the event, have ideas for workshops/talks etc, would be interested in performing, or you’re just a bit curious come along to this initial planning meeting - all genders welcome!

Independent grassroots news from Sheffield and beyond!

What is libre software and why does it matter? Do I really have control over my information? How do I find alternatives to Photoshop and Microsoft Office? What is a Linux and how do I get one on my computer? Is it safe to use Facebook to organise direct action? All of these questions and more will be answered as we take you into the exciting, if a little geeky, world of the free software movement.

A short presentation of the anarchist insurrection of December 2008 in Greece through the words and actions of people that took part in it. The film was created in Thessaloniki in January 2009 and its first presentation took place before an open discussion-review of the insurrection in the squatted public library of Ano Poli.

Screening of a collection of activist footage taken from the recent protests against the Liberal Democrat conference in Sheffield.

Héctor Olivera’s Rebellion in Patagonia is, without a doubt, the best historical reconstitution of a series of strikes organized by an anarcho-syndicalist union ever filmed. The film is based on a book-length essay by Osvaldo Bayer (who contributed to the script) dedicated to an event that extend from 1921 to 1922 in the southern region of Argentina, called Patagonia, near Cape Horn at the border with Chile.
Rebellion in Patagonia follows closely the events narrated in Bayer’s essay - even certain anecdotic details, such as the humorous decision of the guests at a big party in a luxurious hotel to serve themselves to circumvent the boycott organized by the cooks and waiters. Bayer researched on location for seven years to conclude his book, consulting public and private archives, and old collections of newspapers, as well as interviewing some of the survivors. All the names of the anarchists and union organizers were kept - only those of the military were changed.
The anarchists, after the middle of the 19th century, became the most important political force organizing the masses in Argentina. At the beginning of the 20th century, they published two daily newspapers in Buenos Aires. Later, they founded the powerful union F.O.R.A., which began organizing not only industrial but also rural workers. In Patagonia, they marked some important and unexpected victories, which provoked the organization of right wing militias. As the danger of socialism and revolution increased, constant and urgent appeals to the government of (recently elected) president Yrigoyen, culminated in violent military and police repression, which caused thousands of deaths.

MASH is a new initiative in Sheffield aiming to establish a solidarity union supporting workers, claimants and tenants across the city. A short film followed by a discussion on solidarity unionism, what it stands for and why you would want to get involved.

Jezabellezza (one very colourful lady with a keyboard!)

The money raised at this night is going to Mutual Aid Sheffield (M.A.SH). M.A.SH is a voluntary group providing solidarity and support for strikes, workplace actions and community struggles through direct action. The group is open to any worker or unemployed person across any sector. It is independent of all political parties and trade unions and is non-profit.