Libya: The objective of "humanitarian bombing" is death and destruction

The objective is not to come to the rescue of civilians. Quite the opposite. Both military as well as civilian targets have been pre-selected.

Civilian casualties are intentional. They are not the result of "collateral damage".

Early reports confirm that hospitals, civilian airports and government buildings have been bombed.

The objective of the media disinformation campaign is to blatantly obfuscate the loss of life of civilians.

Tomahawk missiles and aerial bombings are upheld as instruments of peace and democracy. They do not result in civilian deaths. 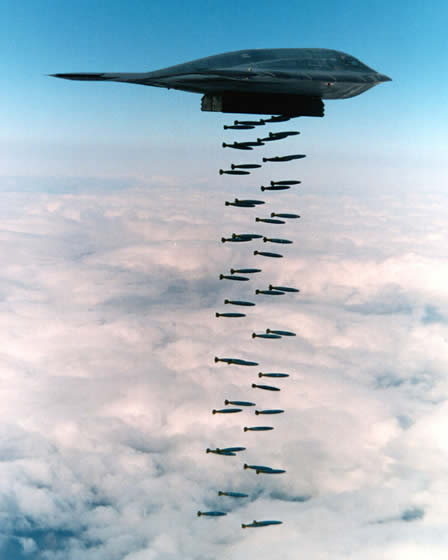 Libya: The objective of "humanitarian bombing" is death and destruction

The Bombing of Civilian Targets

The objective is not to come to the rescue of civilians.

Quite the opposite. Both military as well as civilian targets have been pre-selected.

Civilian casualties are intentional. They are not the result of "collateral damage".

Early reports confirm that hospitals, civilian airports and government buildings have been bombed.

Within hours of the air attacks, a Libyan government health official "said the death toll from the Western air strikes had risen to 64 on Sunday after some of the wounded died." The number of wounded was of the order of 150. (Montreal Gazette, Gadhafi hurls defiance as allied forces strike Libya, March 19, 2011).

The death toll resulting from aerial bombings and missile attacks (March 24) is of the order of 100 civilians, according to Libyan government sources ( UN Chief Expects Int'l Community to Avoid Civilian Casualties in Libya, March 25, 2011)

These deaths resulting from US-NATO missiles and aerial bombings are either denied or casually dismissed as `collateral damage`. According to British Foreign Secretary William Hague modern humanitarian warfare does result in civilian deaths, a totally absurd proposition:

"This operation has been doing what it was meant to do, protect the civilian population of Libya, and there is no confirmed evidence of any casualties at all, civilian casualties, caused by the coalition strikes on the Gaddafi regime," (British Foreign Secretary William Hague, No evidence of civilian casualties in Libya strikes: UK | Reuters, March 25, 2011)

US Defense Secretary Robert Gates confirms that "The coalition is going to great lengths to avoid civilian casualties and most of the targets are air defence targets isolated from populated areas." (West trying to avoid Libyan civilian deaths: Robert Gates - World - DNA, March 22, 2011)

The objective of the media disinformation campaign is to blatantly obfuscate the loss of life of civilians. Western media reports on casualties are heavily convoluted. Tomahawk missiles and aerial bombings are upheld as instruments of peace and democracy. They do not result in civilian deaths.

Without media disinformation, the legitimacy of the military operation under R2P would collapse like a deck of card.

Several hundred people gather at a funeral. The latter is dismissed as Qadhafi propaganda.

The funeral is 'fake" according to Western reports. It is presented as a staged event.

In the words of one report: "Men pray for people supposedly killed in air strikes. But the contents of these coffins remain unclear.( See Civilian Casualties in Question at Tripoli Funeral - WSJ.com, March 24, 2011, In Libya, coffins carry a mystery, SMH, March 26, 2011).

The purpose of these bombardments is to destroy the country's institutions, its productive base. It's called "humanitarian bombing". It is justified under the concept of "Responsibility to Protect" (R2P). Power generating facilities, bridges, roads, hospitals, TV stations, government buildings, factories, are singled out as strategic targets.

Libyan sources (unconfirmed) report that two hospitals and a medical clinic were bombed:

"Al-Tajura Hospital was hit as was Saladin Hospital in Ain Zara. The clinic that was bombed was also located in the vicinity of Tripoli, the Libyan capital. Not only were these civilian structures, but they were also all far away from the combat zone.

In the case of the hospitals, the smart bombs are extremely precise. The Russian Foreign ministry has accused the Western military alliance of conducting an indiscriminate bombing campaign. (Metro - Russia: Stop 'indiscriminate' bombing of Libya, March 19, 2011)

Invariably the Western media will state that Qadhafi forces are bombing the country's hospitals, without supporting evidence.

There are indications that hospitals are included in the list of targets. Canadian CF-18 fighter jets were assigned specific civilian bombing targets. The pilots decided to return to base without attacking their pre-selected target, which was identified as an airfield. According to the press reports, the selected target was adjacent to a hospital: "Lawson said the risk was not related to any threat to the CF-18s, but rather potential damage to civilians or important infrastructure such as hospitals, on the ground." ( CTV Calgary- Canadian pilots abort bombing over risk to civilians - CTV News, March 23, 2011, emphasis added)

Public opinion is invited to unconditionally endorse a new war theater in North Africa. The so-called international community has managed through media propaganda to build a consensus.

The Responsibility to Protect has been endorsed by civil society organizations and NGOs. Many sectors of the progressive Left are supporting the bombings of Libya as a means to installing democracy, without even analysing the nature and composition of the rebellion.

Those who speak out against the US-NATO "no fly zone" are casually branded as "Qadhafi apologists".


The Yugoslav Model of "Humanitarian Bombing"

Humanitarian bombing is part of a historical process. It is embedded in military planning.

The Libyan "humanitarian bombing" campaign is an integral part of military strategy which consists in destroying the country's civilian infrastructure. It is modelled on previous humanitarian bombing endeavors including the 1999 bombing of Yugoslavia and the 2003 military campaign against Iraq.

When Yugoslavia was bombed in 1999, bridges, power plants, schools and hospitals were identified as "legitimate military targets" selected by NATO's Combined Air Operations Centre (CAOC) in Vicenza, Italy and carefully "validated prior to the pilot launching his strike." The same procedure is being applied to Libya: military and civilian targets are validated in advance. The pilot is not always informed as to the precise nature of the target.

In 1999, the children's hospital located in Belgrade's embassy area was the object of air attacks. It had been singled out by military planners as a strategic target.

NATO acknowledged that they had done it, but to "save the lives" of the newly borne, they did not target the section of the hospital where the babies were residing, instead they targeted the building which housed the power generator, which meant no more power for the incubators, which meant the entire hospital was for all sakes and purposes destroyed and many of the children died.

I visited that hospital, one year after the bombing in June 2000 and saw with my own eyes how they did it with utmost accuracy. These are war crimes using the most advanced military technology: The so-called "smart bombs".

In Yugoslavia, the civilian economy was the target: hospitals, airports, government buildings, manufacturing, infrastructure, not to mention 17th century churches and the country's historical and cultural heritage.

"A thermal imager from a spy satellite or an aircraft can detect infrared radiation emitted from any object situated on the petrochemical plant and convert its readings into a high-resolution video or snap picture. ... In the words of a Pentagon spokesman, the U2 "snaps a picture from very high altitude, beams it back in what we call a reach-back, to the States where it is very quickly analyzed". And from there, "the right targeting data" is relayed to the CAOC in Vincenza which then "passes [it] on to people in the cockpit".

The "smart bombs" were not dumb; they went where they were told to go. NATO had scrupulously singled out the containers, tanks and reservoirs, which still contained toxic materials. According to the petrochemical plant director, NATO did not hit a single empty container: "This was not accidental; they chose to hit those that were full and these chemicals spilled into the canal leading to the Danube". ... When the smart bombs hit their lethal targets at Pancevo (see photos below), noxious fluids and fumes were released into the atmosphere, water and soil. "More than one thousand tons of ethylene dichloride spilled from the Pancevo petrochemical complex into the Danube [through the canal which links the plant to the river]. Over a thousand tons of natrium hydroxide were spilled from the Pancevo petrochemical complex. Nearly 1,000 tons of hydrogen chloride spilled from Pancevo into the Danube River" (Michel Chossudovsky, NATO Willfully Triggered an Environmental Catastrophe In Yugoslavia, Global Research, 11 April 2004)


All Out War on Libya, Surge in the Price of Crude Oil...
"Humanitarian Wars are Good for Business".... Speculators Applaud....

"Operation Libya" and the Battle for Oil: Redrawing the Map of Africa