A massive security operation costing over £2 million was mounted on Saturday, directed against a protest outside the Liberal Democrat’s spring conference at Sheffield’s City Hall in South Yorkshire, England. 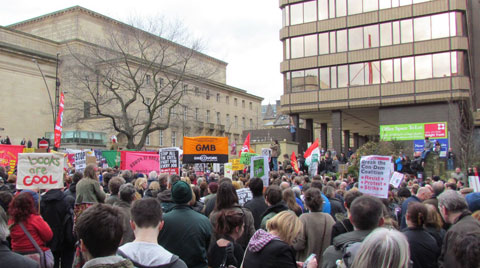 A section of the demonstration outside Sheffield City Hall

Over 1,000 police were deployed in the city over the three days of the event, with officers being drafted in from several neighbouring forces. A ring of steel—an 8ft high fence—constructed around the venue was supplemented by a shorter outer fence to pen in the demonstrators. Special mobile reinforced barriers were also on hand, should the order have be given to “kettle” those present, the police tactic that has been used elsewhere to physically contain protestors for hours. In nearby streets, there were long lines of police vans, with officers in full riot gear, as well as specialist dog handlers and mounted police units.

This was not policing, but an exercise in intimidation—part of an ongoing effort to criminalise dissent since the student protests against tuition fees last year. No protester could get anywhere near the Liberal Democrat conference venue and a strict limit of 100 was put on protests outside party leader Nick Clegg’s hotel. Walking through Sheffield meant passing clumps of police officers every hundred yards or so.

The media constantly ramped up predictions of the size of the anticipated demonstration—from 10,000 to 20,000 and in one report 40,000, in an attempt to justify the vast sums spent and the scale of the disruption caused by the police operation. In the end, there was one police officer present for every three protestors.

Those participating included NHS workers, civil servants, university and college staff, postal workers, teachers and library staff. Students and young people came along to support the protest march and rally. Protestors expressed anger with the impact of the hike in tuition fees, as well as the abolition of the Education Maintenance Allowance (EMA) that will particularly hit working class students, and with the cuts being imposed by the local council, which is controlled by the Liberal Democrats. Just days before, Sheffield City Council had passed a budget slashing spending by £200 million over four years, which will lead to cuts in much needed social provisions and job losses.

However, the protest was also an exercise in political deception and manipulation of such sentiment by the organisers—the Sheffield Anti Cuts Alliance and the Socialist Workers Party (SWP)-controlled Right to Work campaign.

By directing the protesters to “Rage against the LibDems”, the SWP, Socialist Party and company were in fact corralling workers and youth behind a political initiative of the trade union bureaucracy in alliance with the Labour Party. The aim was to put pressure on rank-and-file Liberal Democrat supporters to transfer allegiance to Labour, or even prepare for a future Labour-Lib Dem coalition. In the aftermath of the Liberal Democrats signing the coalition pact with the Conservatives, the desertion of some members to Labour was hailed by these fake left groups as a major breakthrough and a sign that Labour was once again on the ascendency.

The main speaker at the rally was Len McCluskey, general secretary of Unite, Britain’s largest union. He directed his appeal to those attending the conference, saying it was time for Liberal Democrats to break with the coalition and “come over to the side of the British people”.

“I have come to Sheffield to appeal—not to [Liberal Democrat leader] Nick Clegg—but to Lib Dem councillors, activists and, yes, Lib Dem MPs, to put the people first, put their consciences first and come over to the opposition where they will find a warm welcome.”

Inside the conference, Labour MP and shadow cabinet member John Healy spoke to the delegates directly. An open letter he issued afterwards stated, “I attended your Party’s debate in Sheffield today on the government’s NHS reorganisation. It would have surprised some to see me at a Lib Dem Conference but I was made to feel welcome.”

Healy went on to praise the conference delegates for opposing government policy on the National Health Service, which would open up the health service to massive privatisation.

This week Shadow Chancellor Ed Balls said that although he did not see how Nick Clegg “could work with Labour now”, this was “not true of Liberal Democrats more widely”.

Not a single speaker at the rally, which included several SWP members, raised a word of criticism of the Labour Party, its bailout of the banks and the pro-business policies that put the coalition in office in the first place. The Liberal Democrats only control Sheffield because Labour was so right wing that they could posture as a left alternative. The “betrayal” of their vaguely left promises only mirrors that carried out over decades by Labour and the trade unions.

Socialist Equality Party members and supporters in Sheffield distributed thousands of leaflets, calling for the building of rank-and-file committees to lead the struggle against austerity. As the leaflet states, “No confidence can be placed in the Labour Party and the trade unions to fight these attacks, as the Socialist Workers Party and Socialist Party claim. Not a single Labour-controlled authority is prepared to oppose the cuts. Labour’s empty protestations about protecting the ‘poor’ and ‘vulnerable’ are a sham. During 13 years in office, Labour encouraged a feeding frenzy for the financial oligarchy and the major corporations, while working people were forced to take on massive debt to offset a decline in real wages.”

To oppose the cuts means to fight for socialist policies, replacing the current system which rewards the wealthy and punishes the poor with one based on social equality.