Following the protests on the first day of the Liberal Democrat Spring Conference in Sheffield the second day saw 5,000 protesters gathering on Devonshire Green and marching to Barkers Pool outside the City Hall. Direct action against tax dodging corporations involved protest parties in Top Shop, Boots on Fargate and Nat West Bank on High Street [video].

A convergence space that was used on Friday night, a vacant shop next door to Debenhams on The Moor has now been opened as the 0742 Club and is appealing for people to get involved as residents [photos]. There are plans for art exhibitions, music nights, film screenings, workshops, talks and much more, there is a meeting to discuss future of the building on Tuesday at 5pm and and a workshop / talk on land reclaim, common law, and setting up eco communities on Friday, March 18th.

Audio: Audio from the Rally at the start of the March | Rally at Barkers Pool | Fringe Meeting: Who controls the internet? 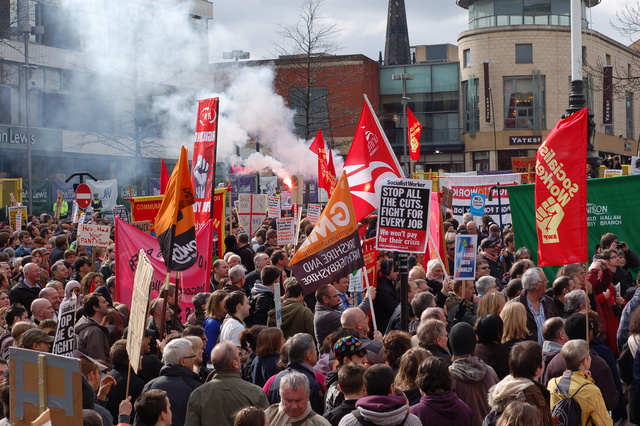 Shed load of pics from Day 2

New space now open. old abbey national bank and offices. need residents asap. we are now running what was the convergence space for the lib dems demo as a arts space, with talks, exhibitions, workshops, music nights and film screenings. need residents asap please call 07949941300 for more info. location is next to debenhams on the moor. sheffield

As Day 2 of the Lib Dem Conference unfolds South Yorkshire Police reiterate that there is no change to the style of Policing from yesterday. SYP respects the right to peaceful protest but will intervene when the conduct of protestors threatens the rights of others.
There are NO plans in place for so called 'kettling' on Devonshire Green - this is not a recognised method of crowd control by South Yorkshire Police.
Police Liaison Teams are identifiable by their blue tabards (as pictured) and deployed around the main conference sites.
The official processional route remains Devonshire Green, Fitzwilliam Street, Charter Row, Pinstone Street, past the Town Hall and left onto Barkers Pool.
#libdempolicing
@syptweet
@InspJForrest

Why do you and your fellow officers bother lying all the time. Doing this shows the utter contempt with which you view the public.

SYP does use kettling see:

Perhaps, Insp Forrest, you are just being shafted by your bosses again as they make you look foolish by making such assertions about SYP.

I have looked at the BBC link you provided in your response and there is no mention of 'kettling'.

SYP respect the right to peaceful protest but will intervene if the conduct of protestors threatens the rights and safety of others.

Just to re-iterate 'kettling' is not a tactic used by South Yorkshire Police as a method of crowd control.

but please, please either try and do your job or stop this persistent and deliberate
deception.

The report is at

to quote from the report

"One protestor said officers had praised those who gathered for their peaceful approach to the demonstration.

But about 50 people, including children, were later penned into nearby Westfield Terrace for about two hours.

Protesters who say they found themselves trapped by riot police criticised the approach. "

Ok so the word 'Kettle' was not used...is that your defence?
It looks like you do not know what the term kettle means!

But at least it is clear that you are sitting at your computer, which means one less copper beating protestors.