Unlike the non-violent protest movements in Egypt and Tunisia, the armed insurgency in Eastern Libya is directly supported by foreign powers with a view to justifying a "humanitarian intervention".

A military intervention is now contemplated by US NATO forces under a "humanitarian mandate". US and NATO military advisers and special forces are already on the ground.

The real objective of "Operation Libya" is not to establish democracy but to take possession of Libya's oil reserves, destabilize the National Oil Corporation (NOC) and eventually privatize the country's oil industry, namely transfer the control and ownership of Libya's oil wealth into foreign hands. 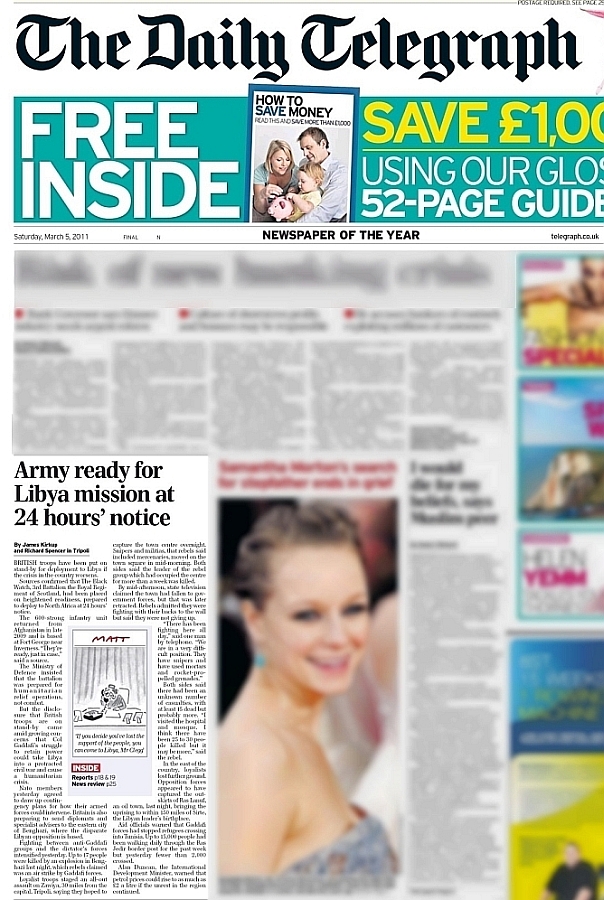 3) UK Prime Minister Cameron: We do not in any way rule out the use of military force against Libya (28 February 2011)


Sources confirmed that The Black Watch, 3rd Battalion the Royal Regiment of Scotland, had been placed on heightened readiness, prepared to deploy to North Africa at 24 hours’ notice. [1] [UK] Special Forces soldiers and MI6 officers are thought to be on standby for deployment to Libya. [2]

Government sources said that British diplomats and specialist advisers could be deployed to Benghazi in eastern Libya to work with leaders trying to co-ordinate efforts to oust the Libyan dictator. British diplomats would help "support the transition" of power, sources said. [...] [Prime Minister] David Cameron this week suggested that Britain was considering giving military assistance to the opposition groups, telling MPs he was prepared to look at supplying weapons. [2]

“Without full and prompt compliance with the [United Nations] Security Council Resolution 1441, or the military action, Saddam would, as the ISG [Iraq Survey Group] concluded, have re-armed with WMD [weapons of mass destruction]. That would have meant that today in the Middle East, there would have been not just one highly dangerous proliferator but two: Iraq and Libya. Colonel Muammar Gaddafi without nuclear and chemical weapons is bad enough. With them, the situation today would be terrifying.”

“For the future of Libya and its people, Colonel Gaddafi’s regime must end and he must leave. To that end we are taking every step possible to isolate the Gaddafi regime, deprive it of money, shrink its power [...] With respect to all these actions, Britain is taking a lead. [...]

And we do not in any way rule out the use of military assets [against Libya]. [...] I have asked the [UK] Ministry of Defence and the [UK] Chief of the Defence Staff to work with our allies on plans for a military no-fly zone [in Libya].”


[UK Prime Minister David Cameron, statement on the situation in Libya, The House of Commons of the British Parliament, London, 28 February 2011] [4]

As the Libyan people struggle for freedom, there is at least one new democracy finding its way in the Middle East

The tide of media disinformation: Who is behind the military insurrection in Libya?

NATO involvement in Libya and the African continent

UK Prime Minister Cameron: We will use military force to free Libya

Libya: Is Washington pushing for civil war to justify a US-NATO military intervention?