Protestors clashed with police and security guards during a picket of banks in Broadmead and Cabot Circus.

About 80 people, many wearing guy fawkes masks and others dressed as clowns, joined the rolling demonstration to highlight the banks’ involvement in the arms trade.

They gathered in Castle Park before marching down Union Street and into Broadmead, at first followed by two patrolling police officers. 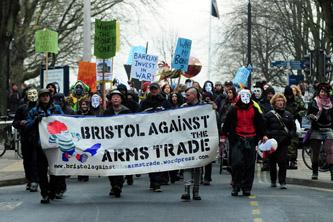 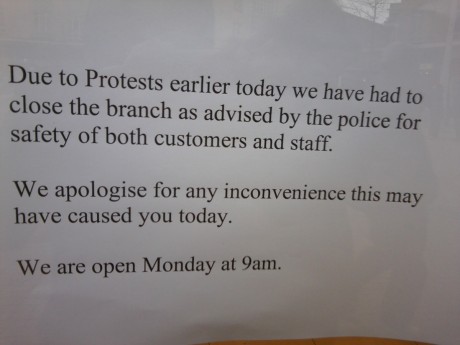 But police reinforcements were brought in, together with security guards, after the protesters got into their first target, Barclays in Broadmead. Barclays were targetted as the have been before for there involvement in weapons that are or should be illegal, including depleted uranium, cluster munitions and Israeli F16 bomb release mechanisms.

The incident became heated when efforts were made to push the demonstrators out of the bank and force the doors shut, leading to some scuffles. Barclays chose to shut for the rest of the day.

Once they had been ejected, the protesters moved on to the nearby Lloyds TSB premises, where police and security staff were already waiting for them, lined up across the door.

Opposite was NatWest, another target for more chanting and messages left chalked on the pavement. The slogans referred to bankers’ bonuses as well as the arms trade. As the police helicopter hovered overhead and bemused shoppers looked on, the gathering then headed into Cabot Circus. For a time they switched their attention to Vodafone – one of the companies accused of tax avoidance – where several protesters ended up on the floor blocking the doorway. HSBC was the final target before the group, by then breaking up, headed back to safer ground near stokes croft. No arrest’s were made.

bristol against the arms trade