Last night's guardian article about another undercover officer below - sorry to repost but this seems like useful information to me. So are we keeping to the guardian's 'gentlemen's agreement' with the police not to be open about who this officer A is? Is it just for those that 'need to know'? Please just post her name and face someone.
Second police officer to infiltrate environmental activists unmasked

'Officer A', who played key role in climate camp, has been accused of betraying friends worried by her disappearance

Drax power station Mark Kennedy and 'Officer A' reportedly encountered each other while planning the first Climate Camp, an attempt to close the Drax power station. Photograph: John Giles/PA

She lived in a house in the student quarter of Leeds, showed a keen interest in protest and had an anarchist poster of the Queen Mother with punk hair on her wall. But in fact, unbeknown to her friends, she was an undercover police officer.

Yesterday the woman's double-life began to unravel as she became the second police spy to have infiltrated the environmental protest movement to be unmasked by the Guardian.

Toinght senior police sources confirmed that the woman, who was active in the movement for four years, was in fact an officer from a police force in the south-east seconded to the National Public Order Intelligence Unit.

It is the same unit – belonging to the Association of Chief Police Officers – that PC Mark Kennedy, a Met officer, was seconded to before he quit the operation, telling friends that what he had done was "wrong".

It was Kennedy who – in a serious breach of protocol – named Officer A to friends as a fellow police officer three months ago.

At the request of intelligence officials, the Guardian has agreed to withhold identifying details about the woman, who is still a serving officer, and will refer to her only as "Officer A".

The woman disappeared from Leeds in early 2008, citing personal reasons. Although she had a leaving party with close friends, she has not been seen by them since. It is believed that she has since had a role in other police operations unrelated to the protest.

Last night a Leeds University lecturer Paul Chatterton, 37, a close friend of the woman, said she had "abused the trust" of activists and that her infiltration had been immoral. "She appeared in 2004 in Leeds and wanted to get involved in various protest movements in the city," he said. "She said, 'What are you guys doing? I'd like to get involved.'"

Chatterton was among a number of activists in the city who came to know the woman well, and now feel betrayed.

He said he saw Officer A around twice a week, and he regularly joined her in the pub or went running with her in the local park. "I considered her quite a close friend," he said.

In retrospect, however, he said he was suspicious about some aspects of her life, such as poster in her living room by the anarchist group Class War. "I always found it quite weird," he said. "It was almost like she wanted to prove herself by having political propaganda on her wall."

Details of her operation will add to mounting concern over a national police operation to infiltrate a peaceful protest movement. On Monday, the Guardian revealed that PC Mark Kennedy had lived for seven years in the protest movement.

Officer A, in her undercover guise, first emerged in Leeds about six years ago, expressing an interest in green activism. Like Kennedy, she then spent years living a double-life as an environmental activist.

She left in 2008 after telling friends she had to leave urgently, for personal reasons, to live in another city.

Senior police sources confirmed tonight that the length of time these two officers – and perhaps more – lived undercover in the protest movement was highly unusual.

Other agents, such as those disrupting serious organised crime, spend considerably less time undercover, but an exception is made for those who need to gain the trust of environmental activists.

Crucially, the woman knew Kennedy, who some suspect of using sexual relationships with activists as a "tactic" to obtain information. According to people who knew both Kennedy and Officer A, they encountered each other during the planning for the first Climate Camp, the event that was used to attempt to close down the Drax coal-fired power station, in North Yorkshire in 2006 and is now an annual fixture.

"Mark and [Officer A] knew each other very well," said one activist. "They hung out. They were both involved in the first climate camp and both had roles driving people to the site at Drax. He was openly sleeping with people – [Officer A] must have known that."

Her role during the Drax operation was key. "She was a driver, did some reccies for actions and of course involved herself in the social aspect of the camp," said Kate Anderson, 29, another friend. "She was present at Drax and Heathrow climate camp actions, against Coryton oil refinery and various anti-capitalist gatherings and protests," she added.

Officer A remains well-remembered at the Common Place, a former pork pie factory in Leeds which has given space and resources to radical groups for six years.

She was one of a group who rented the redbrick premises in Wharf Street as a local contribution to preparations for protests against the Gleneagles G8 summit in 2005. Volunteers at the centre said that she had "certainly been at the core" of the group, and was also involved in the practical side of running a cafe at the centre and the day-to-day finances.

Officer A's credentials were not checked in at the Common Place, which has always been open-minded and welcoming. Apart from hosting groups acting for social change, environmental concern and autonomous movements, it runs English classes for asylum seekers, bike maintenance and repair workshops and social events. "If she was an undercover officer, I imagine she would have found us useful as a way of getting contacts more than anything else," said one of the volunteers, who preferred not to be named. "She was certainly very involved and made some close friendships."

Other activists remembered hearing that Officer A had been involved in a proposal to blockade Drax by hiring cars and locking them down on the only approach road. Although discussed, this plan was never carried out.

Officer A's abrupt disappearance in 2008 caused concern about her welfare rather than suspicion of her role. Workers at Common Place – many of whom have day jobs in the public sector – were reluctant to believe she was an undercover police officer. "People were worried, though, when they tried to find out where she might have gone, and discovered that addresses and people she had mentioned did not exist," said one volunteer. 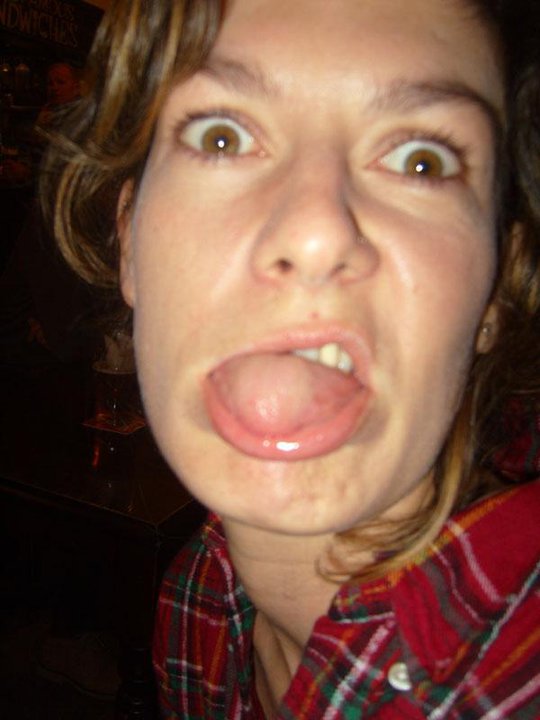 photo of Lyn Watson as a clown? 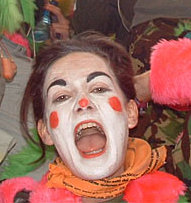 This is the picture mentioned in a previous comment - good to have in explicitly included here. I never knew her so I can't confirm if it really is her though. Difficult to compare to the other photo with all the clown makeup on.