The website was compromised by hackers early on Sunday morning who replaced it with their own page. Almost 350 people who used the website have had their names, addresses and email addresses published online. 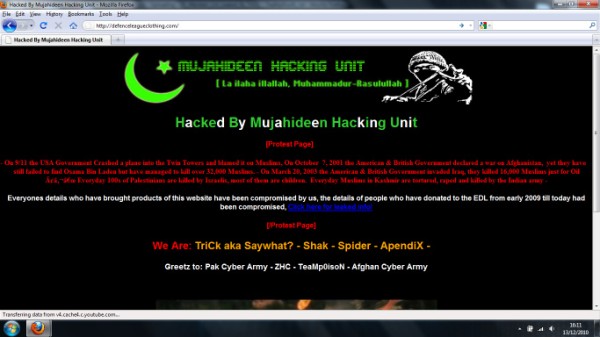 Early Sunday morning the English Defence League clothing website was hacked by TriCk aka Saywhat? & ApendiX from a group called the "Mujahideen Hacking Unit" and "TeaMp0isoN" the website displayed a hate message towards the American, British, Israeli & Indian Government:

"Hacked By Mujahideen Hacking Unit
[Protest Page]
- On 9/11 the USA Government Crashed a plane into the Twin Towers and blamed it on Muslims, On October 7, 2001 the American & British Government declared a war on Afghanistan, yet they have still failed to find Osama Bin Laden but have managed to kill over 32,000 Muslims. - On March 20, 2003 the American & British Government invaded Iraq, they killed 16,000 Muslims just for Oil Ã¢â‚¬â€œ Everyday 100s of Palestinians are killed by Israelis, most of them are children. Everyday Muslims in Kashmir are tortured, raped and killed by the Indian army -
Everyones details who have brought products of this website have been compromised by us, the details of people who have donated to the EDL from early 2009 till today had been compromised, Click here for leaked info!
[/Protest Page]
We Are: TriCk aka Saywhat? - Shak - Spider - ApendiX -
Greetz to: Pak Cyber Army - ZHC - TeaMp0isoN - Afghan Cyber Army "


The hackers released a list of everyone who donated to the EDL & purchased goods of the English Defence League Clothing website, the leaked list contained known BNP members, Nazis and football hooligans.