A year and a half after their pre-emptive arrests, 20 climate change activists began their trial at Nottingham Crown Court last week. The defendants were part of a group of 114 people detained by police in Nottingham last April, suspected of organising to shut down Ratcliffe-on-Soar power station. The defendants are arguing that their planned action was necessary to reduce the environmental devastation of Ratcliffe's emissions. 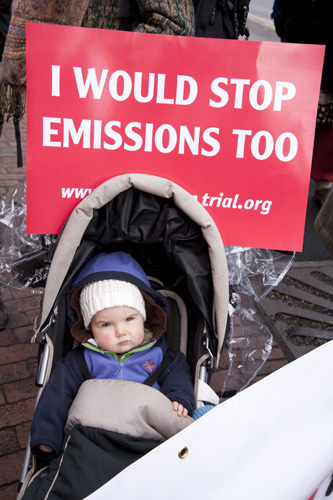 I would stop emissions too!

The arrests were thought to be the biggest ever pre-emptive arrest of environmental activists. The defendants are charged with Conspiracy to Commit Aggravated Trespass for planning to safely shut down Ratcliffe-on-Soar power station for a week and in doing so stopping 150,000 tonnes of CO2 from being emitted. While they admit the intent, they maintain that they are not guilty of of a crime.

The defence will show that the activists acted out of necessity, to prevent death and serious injury. According to official sources, 300,000 people per year already lose their lives due to the effects of climate change and half a billion are at "extreme risk". (http://www.preventionweb.net/)

On Monday 22nd Nov, supporters gathered outside Nottingham Crown Court holding signs which read, "I would stop emissions too".

The prosecution barrister began by asking the jury to hold four words in their heads: 'trespass', 'conspiracy', 'disruption' and 'lawful activity'. She stated that the facts of the case showed there clearly was an agreement by the defendants to disrupt the lawful activity of Ratcliffe on Soar – namely the generation of electricity by burning coal. She alluded to key documents found including a catering sheet provisioning enough supplies to last a week – which was how long the action would have been lasted if it had gone ahead.

Several times during the thirty minute speech the Proscution suggested that the activists planned this complex and expensive operation because they were unwilling to engage in other forms of communication, such as "giving a talk to the W.I" (Women's Institute) or "a local scout group". She said it was more "fun" and "exciting" for the defendants to “abseil down a chimney flue" than to "talk to Manchester United fans about the dangers of burning coal".

Moreover, the prosecution asked, "Is it really necessary to close down a power station when there are so many democratic means available?" – referencing a political process that has allowed the first member of the Green Party to become a Member of Parliament. "Was it more fun," she asked, "to plan this action or to vote for Zac Goldsmith?" "Did the defendants do all this, because they didn’t have a Glastonbury ticket?"

At this point – a member of the jury passed a note with three questions to the Judge. The prosecution finished their opening and the Judge left it to the Defence Counsel to answer.

"Zac Goldsmith? Man Utd? Glastonbury? What is the relevance of these?" asked the Jury. The Defence barrister, Ed Rees answered that there was none – before continuing with his planned opening statements.

The defence pointed out that Ratcliffe on Soar was responsible for over 9 million tonnes of CO2 in 2007 and that politicians and energy companies were failing to deal with the issue – that there existed a 'democratic deficit'.

"You’re not going to hear about forlorn looking polar bears floating on dwindling ice sheets. This case, if anything, is about getting real."

This Monday saw NASA scientist James Hansen give evidence as an expert witness.

The result was a dramatic combination of courtroom drama and complex university lecture. The jury heard Hansen give detailed explanations, assisted by colourful graphs, of the seriousness of human-induced climate change, including the 'dead certainty' of sea level rise by 12 metres this century.

Hansen explained that individual efforts to reduce carbon footprints would at best only delay the inevitable. Phasing out coal completely, on the other hand, would solve 80% of the problem: “We need to leave it in the ground!” When commenting on the motives for the defendants, James Hansen said that, “It doesn’t surprise me that young people are angry when they know that politicians are lying to them.”

When challenged by the judge as to the measurable effects of the defendants' proposed action, Hansen noted they the action could have prevented one, if not more, species from becoming extinct. On average, Hansen elaborated, a coal-fired power station of Ratcliffe's size is responsible for the extinction of 400 species in its 50 year lifetime.

Court continues tomorrow at 10am, with more defendants being called to give evidence.