A User’s Guide to the Crisis of Civilization: And How to Save it – A Review

Anyone who has spent much time discussing peak oil, the collapse of civilizations, climate change or modern security issues eventually confronts the issue of historical antecedents. The [Insert choice of vanished civilization here] collapsed because of X, and that’s the same thing that is happening now . . . . For those who have delved more deeply into such lines of argument, one thing becomes abundantly clear: historical civilizations did not collapse for a single reason. Rather, their troubles, descent and eventual demise or transition were the result of a system of crises. Fast-forward to present, and there is no shortage of commentary forecasting crisis or collapse of our modern civilization. Perhaps for purposes of marketing, simplicity, or simple ignorance, we are awash in commentary on how climate change will spell disaster, or how peak oil will spell disaster, or famine or disease, etc. But these analysts have failed to advance a comprehensive systems-theory approach to our civilization’s troubles. Enter Nafeez Mosaddeq Ahmed. 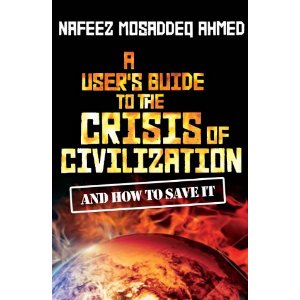 A User’s Guide to the Crisis of Civilization: And How to Save it

Dr. Ahmed is a professor and political scientist working out of London. His new book, “A User’s Guide to the Crisis of Civilization: And How to Save it,” not only fills this gaping void, but does so with a powerful and convincing account of how our civilization is threatened by a system of crises.

Dr. Ahmed examines five separate crises confronting our civilization: “Climate Catastrophe,” “Energy Scarcity,” “Food Insecurity,” “Economic Instability,” “International Terrorism” and the “Militarization Tendency.” While his coverage and explanation of the root causes of each of these crises is outstanding and well worth reading in their own right, this is not the true strength of the book. Rather, he clearly and directly explains that, while the impact of each of these crises is great, we can only understand their true impact and how to potentially solve or mitigate them as a system. We cannot solve or optimally mitigate climate change without considering peak oil, peak oil without considering the collapse of the nation-state, or global poverty without examining our economic and finance structure, etc.

Dr. Ahmed considers civilization to be a complex adaptive system facing a "continuum of crisis":

"The world is on the verge of a potentially cataclysmic convergence of crises, which fundamentally threaten the viability of modern industrial civilization. Seemingly diverse phenomena such as international terrorism, climate change and resource depletion are in fact intensifying manifestations of the same structural dynamic generated by the inherently dysfunctional character of the global political economy, its ideology, its value system, and the interrelation of these with state policies and individual action."

While the book certainly pulls no punches in its description of the nature and scale of the problems facing civilization, it is not, ultimately, a story of doom and gloom. Rather, reviewing and integrating the lessons in civilizational systems-theory developed by Joseph Tainter, Thomas Homer-Dixon, John Michael Greer and others, Dr. Ahmed notes that "the danger of collapse also heralds the hope for 'catagenesis' - renewal through reversion to a simpler state, followed by the emergence of a novel form of society . . . global crises are not simply symptoms of a global systems failure - they are simultaneously symptoms of civilizational transition."

Dr. Ahmed takes the existing state of civilizational systems theory and layers on top a nuanced understanding of socio-political, class, property and productive relationships that define the reality of our efforts to do something about the problem. Dr. Ahmed then outlines 11 "key structural problems" that he argues prevent us from actually addressing and overcoming the challenges facing our civilization, such as:

"The systemic over-dependence on hydrocarbon resources for industrial production, sustained by an international division of labour designed not to meet the needs of local populations, but purely to maximize profits for primarily Northern banks, corporations and governments."

After this compelling narrative of why we have failed to recognize or effectively address this reality, Dr. Ahmed then provides a vision for a "Post-Carbon Revolution and the Renewal of Civilization" that directly addresses each of his "key structural problems." While it would be a stretch to call this vision uplifting or "happy," it is certainly positive while remaining firmly rooted in reality and the possible. For his compelling analysis and recommend path forward, I highly recommend Dr. Ahmed’s “Crisis of Civilization” to readers of The Oil Drum.

While the discussion of peak oil is well done, it may not challenge many Oil Drum readers with new material. However, even for those well-steeped in energy issues, Dr. Ahmed’s coverage of our fractional reserve banking system, the bleak outlook for global food systems, or other related crises will certainly be informative—especially his coverage of how these crises and their structural predicates arise from, cause, and interact with our energy situation. Even the best informed student of peak oil will find new, challenging and provocative material in “Crisis of Civilization”—material that will not only help to advance the discussion of peak oil, but that will help integrate peak oil concerns within the broader system of economic and political action and policy. In the end, if the crisis of our modern civilization can be solved—or at least if the transition to whatever replaces it can be softened—then it will be through a syncretic understanding of the system of threats we face, such as that presented by Dr. Ahmed, that pave the way.