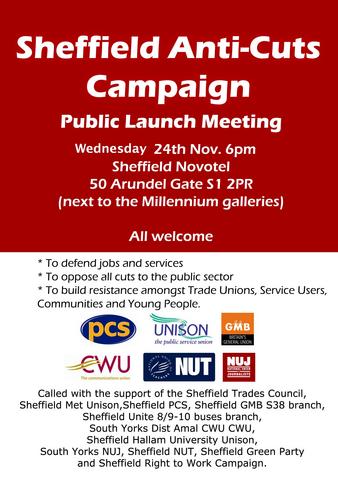 This is a genuine broad alliance of all those with a common interest in opposing the ConDem Government's draconian and vindictive spending cuts programme which will hit the poor and vulnerable in our society the hardest whilst letting off the rich and powerful who are responsible for the economic crisis.

The initiative first came from trade unions in the firing line such as PCS the civil service union who face several thousand job cuts in South Yorkshire. It has support from trade unions across the city, particularly those with membership in the public sector, and from the trade union movement as a whole e.g. the Sheffield Trades Council. But trade unions cannot fight this onslaught on their own and nor should they. That's why we welcome participation from tenants associations, students, pensioners, community groups, Right to Work, and those from all political groups who genuinely want to work together in a broad alliance against the cuts. And of course it's open to individuals who have no organsiation and no voice but who are equally scared and angry at the ConDem's cuts agenda.

The Sheffield Anti-Cuts Alliance will not only highlight and campaign against public sector cuts as they hit Sheffield, we will organise activities and protests, hold public meetings, ensure we have a robust voice in the local media and also ensure we put across an alternative vision. The organisers of Sheffield Anti-Cuts Alliance do not believe the cuts are necessary or that there is no alternative as the media claims. Spending cuts could equally and easily be replaced by tax revenue measures targeted at the better off especially those who avoid taxes in their millions. Government official estimates suggest over £20B is avoided by powerful business interests each year and that's without even raising the top rate of tax ( we have some of the lowest tax rates on high earners in Europe). Apart from legal and illegal tax loopholes and the appalling use of tax havens to avoid paying UK tax altogether, it is also widely reported that Inland Revenue is so under resourced it cannot claim all the tax revenue due to it! Furthemore drastic and sudden spending cuts will have a huge impact on the economy, creating much increased unemployment, cutting public ocntracts to private sector businesses and reducing the spending power of working people generally.

We cannot let this ConDem Government get away with it!

Please come along and tell your friends and work colleagues. This is one of the most important intiatives in Sheffield for a long time.