An interview with a "Lebanese Christian" about Hezbollah-Christian relations

Today it is my real pleasure to submit to you the text of a Q&A I have had with "Lebanese Christian". One of the most misunderstood aspects of the socio-political reality of Lebanon is the fact that Hezbollah is very open to Christians as long as they are real Lebanese patriots and not proxies for Israel and the USA. I asked "Lebanese Christian" to comment on some of the aspects of the relationship between Christians and Hezbollah and he kindly agreed to reply to my question, for which I am deeply grateful to him. 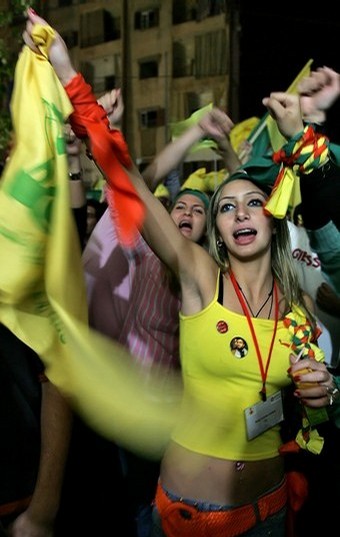 supporters of the Hezbollah-Aoun alliance


The Saker's Q&A with "Lebanese Christian" about Hezbollah-Christian relations


The Saker: "Lebanese Christian", please introduce yourself: how old are you? what kind of education do you have? what do you do in life? Have you ever served in the military or in the Resistance? What is your religion? How would you situate yourself politically?

Lebanese Christian: I am in my fifties, well educated, have worked and lived in many countries over the years in International Business. I am a Maronite Christian, politically active since my early twenties, highly critical of the "order" or disorder if you will...which reigns in the Middle East since 1948, and where we have seen major soft and hard power struggles/wars and turmoil between the two big blocks during the cold war until 1990...especially in Lebanon, because of the forced presence of over 500.000 Palestinian refugees, armed intermittently over a period of 20 years and continuing to this very day in different forms, but having a low profile now.

I feel comfortable in Washington DC, in NYC,or any American city or town, in any European city, as well as many Arab Countries where I lived and worked over the years. I was briefly part and parcel of the Christian Resistance in the early 80s.


The Saker: On a daily, routine, basis, how would you describe the interaction between the Muslim supporters of Hezbollah and the Christians? How do the Muslim supporters of Hezbollah differentiate between the Christians who are vehemently anti-Hezbollah to those who are equally strongly pro-Hezbollah. Don't they lump all Christians into one "crusader" category (like the American propaganda who calls all pious Muslims "jihadists").

Lebanese Christian: The interaction between Muslims and Christians in Lebanon is perfectly normal, friendly and routine for hundreds of years, except for the brief periods of various outbursts of civil war due to deliberate "outside" interference, in 1860, 1958, 1970s, mainly because of the Palestinian armed transgressions and again nowadays because of the success of Hizbullah in defeating the Israeli occupation of Lebanese soil. Despite these various deadly outbursts, things always go back to normal fairly quickly, because people have no desire to succumb to such tragedies and desire a peaceful interaction in a very normal way. There is no such thing as a clash of civilization in Lebanon despite all the hoopla in the West since 9/11 despite the fact that there are clearly cultural differences between the two communities.

There are also in Lebanon a considerable amount of interfaith marriages, still occurring today regularly, and over 365000 marriages between Sunni and Shia, in a population of about 2.5 Million Muslims in Lebanon, which makes it impossible to ignore and overcome in any artificial schism tried and promoted diligently by Israel and the West.

As far as the supporters of the Resistance, I would say that they are a clear majority in the country, and the coexistence between the two groups is fairly civilized except for some occasional incidents here or there, where very quickly we discover that it is various Intelligence agencies come in the mix, especially Arab Intelligence services, like Egypt, KSA and Jordan doing the bidding of the West, and also occasional clashes in Universities between the two groups, considering the young age of the protagonists. But, it's always contained fairly quickly.

The other major element of strength of the Resistance is the fantastic discipline of the Shis of Lebanon, a strength which is mostly ignored and overlooked by their numerous enemies .

People tend to forget or ignore the suffering of the Shia and all Lebanese in South Lebanon since 1948, with various massacres committed by Israeli IDF forces in Houla, Qana (twice) and the thousands of tons of high explosives reigned on them over the years by Israel, and the total absence of the Lebanese Government institutions, from the Army to other social institutions, Hence they had to resort to finding ways of protecting themselves, their families and their fields, farms, homes etc. It was natural for them to resort to Iran after 1979, and they would have been very happy if they received help from Switzerland, Denmark or Sweden for that matter, but the only help that came was from Iran and the Lebanese Diaspora Worldwide.

The Lebanese Brigades are a good idea whose time has come because there are so many Lebanese Christians and Muslims who would like to join the Resistance, and this is a Good avenue to absorb them and make a good use of their skills and numbers in any future Israeli aggression or internal fomented turmoil.


The Saker: Have you ever had the opportunity to speak with Hezbollah officials or official party members (as opposed to supporters)? If yes, how do you think they perceive you, being a Christian. Do they encourage you do convert to Islam?

Lebanese Christian: Yes, I have had the opportunity to meet privately with party members, and Hizbullah members of Parliament etc., and have always been well received cordially, respectfully, and continue to have an ongoing dialogue with many of them. Not once did any one suggest any conversion or the like. We all have mutual respect and understanding of each other, and each person maintains his own belief systems fully and respectfully.


The Saker: What does your clergy say about Hezbollah? After all, since Muslims do not accept the divinity of Jesus-Christ and only consider Him as a prophet, they are heretics from the point of view of Christian dogmatic theology. Are these differences in belief a major impediment to Hezbollah-Christian relations?

Lebanese Christian: None of these dogmatic issues are any impediment to Hizbullah-Christian relations. The relationship is based on a nationalistic political vision and religion has absolutely no place between them. There is an ongoing dialogue between Christians and Muslims in an official setting, which has been going on for years, trying to bridge various gaps in understanding each other in the Orient. There is a similar dialogue going on at the Vatican.

As for the Lebanese Clergy and the Resistance, they are as divided as the society at large in Lebanon, with some Clergy openly supportive and others reluctant, afraid and schizophrenic about "hurting" ties with the West because of that issue and their various close relationships with Western institutions over the decades.


The Saker: Both in 1982 and in 2006 the world witnessed abject scenes of Lebanese Christians welcoming the invading Israelis (in 1982 with champagne and speeches). How does the Christian community deal with such a stigma? What about the accusation that Christians are "crusaders"? Tell us about the Lebanese Druze and Sunni communities and their own stigmas: Druzes actually serve in the IDF, does that kind of collaboration between them and the Zionists cast a shadow over the Druzes in Lebanon? What about the Sunnis? Are they suspected of being sympathizers of Wahabi/Takfiri/Salafi movements within Sunni Islam?

Lebanese Christian: In 2006, no one in Lebanon "openly" cheered the Israeli onslaught on Lebanon. I was there for the full three months during, before and after the war of 2006. There were obviously some Lebanese who colluded with USA/Israel in the hope that the Resistance will be very quickly smashed and finished and when they saw after few days that the situation was very dicey at best they ducked and disappeared, waiting in vain for the promised victory of Israel which never came, and they have been crushed ever since.

I have to correct the premise of your questions here because of some inaccuracies: in 1982, a lot of Lebanese welcomed the Israeli invasion, especially in South Lebanon, and especially the Shia with rice and flowers for IDF, because of the tremendous suffering of all populations in Lebanon relating to the horrible Palestinian transgressions in Lebanon with armed sectarian conflicts over 2 decades stemming from their attempt at taking over Lebanon as a base of operation against Israel, but taking ALL Lebanese hostages of their fratricidal conflict within the Lebanese body polity etc., and most Lebanese were happy to get rid of the Palestinian armed presence in the country and were in a way thankful to the Israelis initially. But the Israelis and IDF overstayed their welcome in South Lebanon and turned it into a fully fledged occupation which lasted 18 years. This was the main reason for the birth of Hizbullah and its mighty struggle against IDF and Israel since then.

As for the sectarian divisions and their repercussions, they are mostly forgotten, and today's divisions are between Nationalists and supporters of Western policies or other moderate Arab countries close to the West or subservient to the West shall we say, and you find supporters of the Resistance in all sects and walks of life.

The Druze community follow the whims of Walid Jumblatt wherever he goes they mostly follow him blindly, but their presence in Israel and Syria in some large numbers, make their political choices fairly tricky to say the least but overall, in Lebanon and Syria, the majority seem to have Arab nationalistic views although some covert links with Israeli Druze do exist and persist today, and sometimes they materialize in some open public forums, with Israeli Druze groups coming to join their brethren from Lebanon and Syria in recurring meetings.

As for the Sunni affiliations in Lebanon, there are very strong Saudi Wahhabi influences manifesting themselves in Tripoli in the north of the country mainly and in some Palestinian refugee camps etc., and you find fringe groups affiliated with ALL these various Sunni denominations. Also, the Sunni Future movement of Saad Hariri has very strong links to Saudi Arabia with all what that entails.


The Saker: There is pretty good evidence that Muslims are already the majority of the population of Lebanon (the CIA puts the figure at just under 60%), yet the Lebanese Constitution is based on sectarian categories and we often hear of the fact that the Christians in Lebanon are afraid of loosing power to a truly democratic vote and become a minority. Is that true? Would Christians in Lebanon fear a Hezbollah-run government? If yes, why and if no, why not?

Lebanese Christian: The sectarian, consensual based constitution of Lebanon does not permit any one group of overtaking or overrunning the Government or the country in a way shape or form, whether with elections or otherwise. The Parliament is divided equally between Muslims and Christians 50/50 and will remain so, no matter what the demographic numbers will be now or in the future and most Lebanese like it that way, and are convinced that it is the best way to proceed, respecting all beliefs, communities etc, exactly as they are, and not as we like them to be. Hence, no clash of civilizations will ever occur in Lebanon to make a long story short. I, personally have absolutely no fear of Hezbollah ever taking over the country, especially with Sayyed Hassan Nasrallah around alive and well and I think that most Lebanese feel that way, friend or foe, because of the tremendous respect, wisdom and historical perspective they have experienced with Hizbullah over a period of 28 years.

The Saker: Thank you very much for your replies!