Nottingham talk on 'Life Under the Jolly Roger'

Reflections on Anarchy and the Golden Age of Piracy 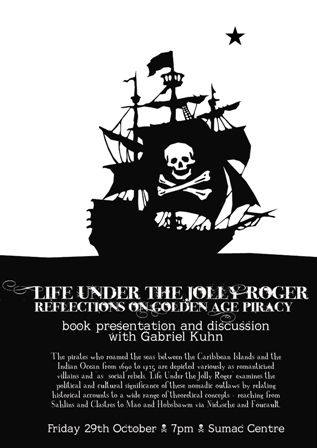 Over the last couple of decades an ideological battle has raged over the political legacy and cultural symbolism of the “golden age” pirates who roamed the seas between the Caribbean Islands and the Indian Ocean from 1690 to 1725. They are depicted as romanticized villains on the one hand, and as genuine social rebels on the other. Life Under the Jolly Roger examines the political and cultural significance of these nomadic outlaws by relating historical accounts to a wide range of theoretical concepts — reaching from Marshall Sahlins and Pierre Clastres to Mao-Tse Tung and Eric J. Hobsbawm via Friedrich Nietzsche and Michel Foucault. The meanings of race, gender, sexuality, and disability in golden age pirate communities are analyzed and contextualized, as are the piratesʼ forms of organization, economy and ethics.