In its main editorial Sunday, the New York Times, the major voice of what passes for liberalism in America, openly defends the right of the US government to assassinate anyone it pleases.

The open reactionaries like the Wall Street Journal and Fox News display their bloodlust unashamedly. The “liberals” like the Times prefer a dose of hypocritical moralizing and legalistic quibbling. The consequences for humanity are the same. 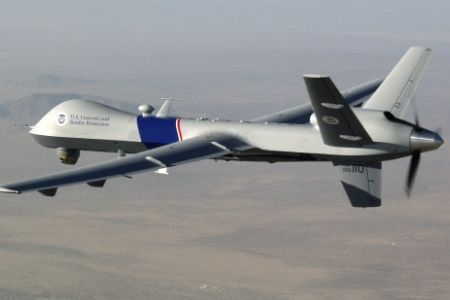 The New York Times Defends Assassinations. The Right of US Government "to assassinate anyone it pleases"


In its main editorial Sunday, the New York Times, the major voice of what passes for liberalism in America, openly defends the right of the US government to assassinate anyone it pleases. The only restriction the Times suggests is that the president should be required to have his selection of murder victims rubber-stamped by a secret court like the one that now approves 99.99 percent of all electronic eavesdropping requests.

The apologia for killing begins with a blatant lie about the US assassination program using missiles fired from CIA-operated drone aircraft flying along the Afghanistan-Pakistan border. The Times claims, citing official US government sources: “The drone program has been effective, killing more than 400 Al Qaeda militants this year alone, according to American officials, but fewer than 10 noncombatants.”

Actually, Pakistani government officials estimated the number of civilians killed by drone attacks in 2009 alone at more than 700, with an even higher figure this year, as the Obama administration has rained missiles and bombs on the Afghanistan-Pakistan border region.(See “US drone missiles slaughtered 700 Pakistani civilians in 2009” .)

A report in the Pakistani newspaper Dawn concluded, “For each Al-Qaeda and Taliban terrorist killed by US drones, 140 innocent Pakistanis also had to die. Over 90 per cent of those killed in the deadly missile strikes were civilians, claim authorities.”

The Times editors cannot be unaware of these well-established figures, since their own journalists have reported a civilian death toll from US missile strikes in Pakistan of some 500 by April 2009, and 100 to 500 more through April 2010. They lie shamelessly and deliberately in order to conceal the significance of their endorsement of such widespread killing.

The editorial claims that US drone missile attacks are legal under international law as self-defense, but this is flatly rejected by human rights groups and legal experts, except those who work as paid apologists for the CIA and Pentagon. The United States is not at war with Afghanistan, Pakistan, Yemen or Somalia, but US missiles have struck the territory of all these countries and annihilated their citizens.

In a 29-page report to the United Nations Human Rights Council in June, the UN Special Rapporteur on extrajudicial executions, Philip Alston, rejected the doctrine of “preemptive self-defense” employed by the Bush and Obama administrations, as well as the state of Israel, and declared that a targeted killing outside actual warfare “is almost never likely to be legal.”

In an accompanying statement, Alston pointed out the consequences if such a doctrine were to become universal. He declared: “If invoked by other states, in pursuit of those they deem to be terrorists and to have attacked them, it would cause chaos.”

The Times concedes, “it is not within the power of a commander in chief to simply declare anyone anywhere a combatant and kill them, without the slightest advance independent oversight.” The editorial argues that such arbitrary killings can be prevented through procedural safeguards of a purely cosmetic character.

These would include the Obama administration making public “its standards for putting people on terrorist or assassination lists,” limiting targets to “only people who are actively planning or participating in terror, or who are leaders of Al Qaeda or the Taliban”; capturing instead of killing, where possible; and “oversight outside the administration,” i.e., the aforementioned judicial review by a body like the Foreign Intelligence Surveillance Court. Yes, if only the Nazis had followed “proper procedures.”

In the mealymouthed language that has become typical of the Times as it provides “liberal” justifications for the crimes of US imperialism, the editors insist that in the case of US citizens, “the government needs to employ some due process before depriving someone of life,” adding that, “If practical, the United States should get permission from a foreign government before carrying out an attack on its soil.”

The Times editorial admits that in the much-publicized case of Anwar al-Awlaki, the US-born Muslim cleric now living in Yemen, the Obama administration has acted in a manner diametrically opposed to the procedure the newspaper claims to favor. Awlaki has been targeted for assassination, based on criteria that are secret and unreviewable. The Justice Department has gone to court to assert the “state secrets” privilege to quash a lawsuit brought by the American Civil Liberties Union, on behalf of Awlaki’s father, seeking to compel the government to justify or rescind its death sentence.

No evidence has been presented that Awlaki, a longtime publicist for Islamic fundamentalism, has engaged in actual terrorist actions. And as the Timesitself admits, “If the United States starts killing every Islamic radical who has called for jihad, there will be no end to the violence.” But the editors are nonetheless willing to place their confidence in the Obama administration, even to the point of giving it powers of life and death over citizens of the US and other countries alike.

The Times editorial reeks of cynicism. It advances arguments that convince no one, and are not intended to convince, only to provide a screen of words for a policy of imperialist barbarism and reaction. It is one more demonstration that, within the US financial aristocracy, there is no constituency whatsoever for the defense of democratic rights.

The open reactionaries like the Wall Street Journal and Fox News display their bloodlust unashamedly. The “liberals” like the Times prefer a dose of hypocritical moralizing and legalistic quibbling. The consequences for humanity are the same.