The President and I (a *must watch* interview of President Ahmadinejad)

Today I am truly delighted to post a really unique item: a 50min interview of President Ahmadinejad conducted by somebody who actually understands the issues and who wants to discover what this man is really like.

So far, all the interviews given by President Ahmadinejad to US reporters have inevitable resulted in idiotic questions, outright hostility, petty accusations and outright nonsense. 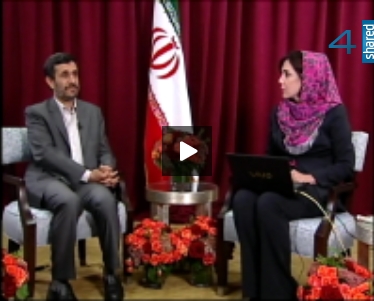 Today I am truly delighted to post a really unique item: a 50min interview of President Ahmadinejad conducted by somebody who actually understands the issues and who wants to discover what this man is really like. So far, ALL the interviews given by President Ahmadinejad to US reporters have inevitable resulted in idiotic questions, outright hostility, petty accusations and outright nonsense. As Roger Waters sang already many years ago, we have to "twenty channels of * on the TV to choose from". Well, now we have 2000 channels, but its still the same useless and offensive garbage.

Soraya Sepahpour-Ulrich offers us an amazing opportunity to gain some insight into the personality of President Ahmadinejad. I am deeply grateful to her for allowing me to publish her interview on my blog.

One detail: I tried embedding the video directly on my blog, but at least on Firefox under Linux this did not work. I therefore simply placed a link to the page where you can either watch or even download the full video.


The President and I

(a *must watch* interview of President Ahmadinejad)


I was pleasantly surprised when my request for an interview with Mr. Ahmadinejad, Iran's president was accepted. President Ahmadinejad has never shied away from being heard, but these interviews had been exclusive to prominent mainstream media personalities such as Larry King and Charlie Rose. However, it was the mainstream media's projection of Mr. Ahmadinejad that always remained questionable.

On September 21, 2010, on the occasion of President Ahmadinejad's participation at the UN General Assembly, I was given the opportunity to conduct a candid interview with Mr. Ahmadinejad. I had overlooked the fact that such a meeting would be conducted in the presence of the secret service and body guards. No sooner had this reality hit home than Mr. Ahmadinejad's down to earth and easy attitude made me forget the presence of others in the room as we began the session.

The time had come for me to verify or refute a research I had conducted as a Public Diplomacy graduate student while attending USC Annenberg School for Communication and Journalism. At that time, I had examined the media's role in fashioning the image of Mr. Ahmadinejad. My research posited that though ‘some great men make history, and history makes some men great’, in an age dominated by the media-- internet, television, radio, and newspapers, the portrayal of Ahmadinejad is an artificial construct of the mainstream media. The image portrayed by the media had made him hero to some and a villain to others. Superstar or scapegoat, the Iranian President continues to dominate the news. With help and questions from university students and professors, I was eager to meet the real Ahmadinejad.

Although a full hour had been granted for the interview (more accurately Q&A), regrettably, given the number of questions and the fact that the translation was not simultaneous, many of the questions were left unanswered. To my amazement, President Ahmadinejad granted me a second, follow-up interview (the transcript of which will be forwarded to participating universities).

It is a rewarding experience to bring one's research to a practical conclusion. I firmly believe that Ahmadinejad is misrepresented by the corporate owned media. I leave it up to others to judge for themselves by watching the interview here: