Top scientists and intelligence experts dispute the “official US version” of what happened on 9-11 and variously assert that people within the US Government did 9-11 (possibly with Israeli assistance). 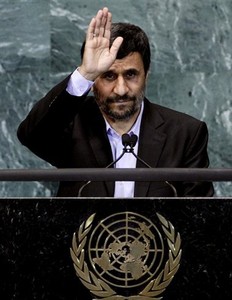 Top scientists and intelligence experts dispute the “official US version” of what happened on 9-11 and variously assert that people within the US Government did 9-11 (possibly with Israeli assistance). President Ahmadinejad’s 9-11 speech at the UN merely advances 3 logical, testable, scientific hypotheses about 9-11 but has immediately elicited hysterical, egregiously dishonest, anti-science and anti-truth responses from Western leaders and Mainstream media.

The immediate responses involved a walk-out of US representatives and its lackeys from 30 countries, including Australia, Britain, Sweden and Spain, from the speech itself – they simply didn’t want to hear anything differing from the “official US version” of 9-11.

Western media and politicians immediately started falsely and hysterically reporting Ahmadinejad’s comments on 9-11. President Ahmadinejad’s speech merely offered 3 scientific hypotheses about the cause of 9-11, namely (1) the “official US version” of a “terrorist group”, (2) US responsibility and (3) US complicity in allowing a terrorist operation to proceed.

The UK BBC was an exception and its report was factual:

“23 September 2010. The US and other delegations at the 65th UN General Assembly have walked out in protest at the speech by the Iranian president. Mahmoud Ahmadinejad said some saw the 11 September attacks on the US as part of a US conspiracy to protect Israel. He was speaking on the first day of the week-long UN diplomatic marathon.”

“Iranian president Mahmoud Ahmadinejad has told the United Nations that most people believe the US government was responsible for the attacks of September 11, 2001.”

Indeed the only arguable part of President Ahmadinejad’s speech was “The majority of the American people as well as other nations and politicians agree with this view [that the US did 9-11]” – he would probably have been correct in stating that a “substantial proportion” rather than “the majority” thought that the US was involved in the 9-11 atrocity. Thus prior Mainstream polls have indicated that about one third of Americans believe that 9-11 was an inside job involving the US Government.

Science is about critically testing potentially falsifiable hypotheses and that is all that President Ahmadinejad has advocated in relation to 9-11:

“It is proposed that the United Nations set up an independent fact-finding group for the event of the II September so that in the future expressing views about it is not forbidden.”

In contrast, the US and US lackey representatives who blocked their ears and walked out of the UN General Assembly and those who then lied about President Ahmadinejad’s speech must be condemned for an anti-science stance that is antithetical to finding out what happened on 9-11 and getting justice for the victims and their relatives.

Having read what President Ahmadinejad actually said, now consider the offensive, anti-science lying by Obama, US lackeys and Western media who – for what ever reasons – are opposed to a scientific approach to 9-11.

Obama's response on Ahmadinejad’s call for scientific investigation of 9-11 (BBC):

“"There were candlelight vigils and I think a natural sense of shared humanity and sympathy was expressed within Iran. It just shows once again the difference between how the Iranian leadership and this regime operates and how I think the vast majority of the Iranian people, who are respectful and thoughtful, think about these issues….It was offensive. It was hateful. And particularly for him to make the statement here in Manhattan, just a little north of Ground Zero, where families lost their loved ones. People of all faiths, all ethnicities who see this as the seminal tragedy of this generation. For him to make a statement like that was inexcusable."

"I strongly condemn the comments made yesterday by a leader of a delegation that called into question the cause of the 9/11 terrorist attacks on US soil. It is unacceptable for the platform of the General Assembly of the United Nations to be misused in this way.“

"[Ahmadinejad’s suggestion] that the United States was in any way responsible for the 9/11 terrorist attacks or that the majority of people in the US believe this to be the case, is outrageous and unacceptable. It is for this reason that all representatives of the 27 nations of the EU walked out."

President Ahmadinejad, like all leaders, can be legitimately criticized for all sorts of things. However on 9-11 he is correct in demanding a proper scientific inquiry into who did 9-11. Those like war criminal Obama who condemn Ahmadinejad’s call for a proper inquiry into 9-11 are in effect calling for an ongoing cover-up and can thus be seen to be witting or unwitting accessories after the fact of the 9-11 atrocity.

Further, the deaths associated with the 9-11 atrocity (3,000) are dwarfed by the 8 million violent deaths and non-violent avoidable deaths in the post-9-11, US-led War on Terror, the breakdown being 2.5 million (Iraq), 4.5 million (Afghanistan) and 0.8 million global opiate drug-related deaths linked to US Alliance restoration of the Taliban-destroyed Afghan opium industry (from 6% of world market share in 2001 to over 90% today).

A sensible way to publicly get to the truth about 9-11 as advocated by Iranian President Mahmoud Ahmadinejad would be war crimes trials before the International Criminal Court (ICC) of US Alliance leaders associated with the ongoing Muslim Holocaust and with charges including, as appropriate, complicity in 9-11 or being accessories after the fact of 9-11. George Bush, Tony Blair, Barack Obama, Gordon Brown, David Cameron, Nicolas Sarkozy, Stephen Harper, Angela Merkel, John Howard, Kevin Rudd, Julia Gillard, their “we were just obeying orders” subordinates and their Mainstream media collaborators should all be arraigned before the International Criminal Court.