Real versus fake crises: Concealing the risk of an all out nuclear war

We are living history but at the same time we are unable to comprehend the events which shape our future and which are currently unfolding in front of our very eyes.

The details of ongoing war preparations in relation to Iran have been withheld from the public eye.The media is involved in acts of camouflage.

The devastating impacts of a nuclear war are either trivialized or not mentioned. Meanwhile, public opinion has its eyes riveted on what might described as "fake crises".

The fear campaign underlying a fake crisis is intended to obfuscate the real crisis --including the danger of nuclear war-- as well as disarm all forms of meaningful resistance and opposition. 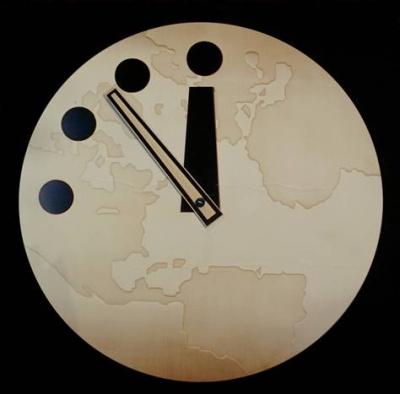 We have reached a turning point in our history. The US and its allies are preparing to launch a nuclear war with devastating consequences.

During the Cold War, the concept of "mutual assured destruction" (MAD) was put forth. An understanding of the consequences of nuclear war largely contributed to avoiding the outbreak of war between the US and the Soviet Union.

Today, in the post-Cold war era, no such understanding prevails.

The spectre of a nuclear holocaust, which haunted the world for half a century has been relegated to the status of "collateral damage".

This military adventure in the real sense of the word threatens the future of humanity.

While one can conceptualize the loss of life and destruction resulting from present-day wars including Iraq and Afghanistan, it is impossible to assess or fully comprehend the devastation which would result from a Third World War, using "new technologies" and advanced weapons systems, until it actually occurs and becomes a reality.

A sequence of US sponsored wars characterizes a period of our history euphemistically referred to as "the post-War era". The US led war in Afghanistan has been ongoing, in various stages, for thirty-one years. Iraq has been under US and allied military occupation for more than seven years.
We are living history but at the same time we are unable to comprehend the events which shape our future and which are currently unfolding in front of our very eyes.


The details of ongoing war preparations in relation to Iran have been withheld from the public eye.

Towards a World War III Scenario? The Role of Israel in Triggering an Attack on Iran, Global Research, August 13, 2010,

The media is involved in acts of camouflage. The devastating impacts of a nuclear war are either trivialized or not mentioned. Meanwhile, public opinion has its eyes rivetted on what might be described as "fake crises".

A Third World War is no longer a hypothetical scenario. Already in 2007, president Bush had hinted in no uncertain terms that if Iran did not comply with US demands, we might "reluctantly" be forced into in a World War III situation:
" We got a leader in Iran who has announced that he wants to destroy Israel. So I've told people that if you're interested in avoiding World War III, it seems like you ought to be interested in preventing them from have the knowledge necessary to make a nuclear weapon. I take the threat of Iran with a nuclear weapon very seriously...." (George W. Bush, 17 October 2007)

In an utterly twisted logic, World War III is presented as a means to preserving World Peace.

Iran is blamed for refusing to abide by the "reasonable demands" of "the international community".

Realities are twisted and turned upside down. Iran is being accused of wanting to start World War III. Inherent in US military doctrine, the victims of war are often heralded as the aggressor.

World War III is upheld as a bona fide humanitarian undertaking which contributes to global security. In a bitter irony, those who decide on the use of nuclear weapons believe their own propaganda. President and Commander in Chief Barack Obama believes his own lies.

Neither the War nor the worldwide economic depression are understood as part of an unprecedented crisis in World history. Ironically, the dangers to humanity of an all out nuclear war do not instil fear and public concern.

Instead, fake "crises" -- e.g. a global warming, a Worldwide flu pandemic, a "false flag" nuclear attack by "Islamic terrorists"--, are fabricated by the media, the governments, the intelligence apparatus and the Washington think tanks.
An understanding of fundamental social and political events is replaced by a World of sheer fantasy, where "evil folks" are lurking. The purpose of these "fake crises" is to obfuscate the real crisis as well as instil fear and insecurity among the population:

"The whole aim of practical politics is to keep the populace alarmed ... by menacing it with an endless series of hobgoblins, all of them imaginary... The urge to save humanity is almost always only a false face for the urge to rule it." (H. L. Menken)

While the real danger of nuclear war is barely acknowledged, these "fake crises" are invariably front page news.

Mass unemployment, foreclosures and poverty are not characteristic of a (social) crisis.

The legalization of torture and targeted political assassinations is not part of a (constitutional) crisis. Torturing and killing potential terrorists are intended to "make the world safer".

War waged on humanitarian grounds is considered a "solution" to a crisis rather than its cause.

Economic Depression is not mentioned because the economic recession is said to be over. In other words there is no economic crisis.

1. A Nuclear Attack on America by Al Qaeda

"Sooner or later there will be a nuclear 9/11 [by Islamic terrorists] in an American city or that of a US ally... A terrorist nuclear attack against an American city could take many forms. A worst case scenario would be the detonation of a nuclear device within a city. Depending upon the size and sophistication of the weapon, it could kill hundreds of thousands or even millions of people." David Krieger, Is a Nuclear 9/11 in Our Future?, Nuclear Age Peace Foundation, October 6, 2003

The nuclear threat comes from "non-State" organizations, with limited advanced weapons' capabilities rather than from known nuclear powers (nuclear States).

"As many as 2 billion people could become infected [H1N1] over the next two years — nearly one-third of the world population." (World Health Organization as reported by the Western media, July 2009, emphasis added)

"Swine flu could strike up to 40 percent of Americans over the next two years and as many as several hundred thousand could die if a vaccine campaign and other measures aren't successful." (Official Statement of the US Administration, Associated Press, 24 July 2009).


3. The Perils of Global Warming

"The headline figures are: 300,000 deaths and 300 million people affected every year [by global warming]" (Greenpeace, Deaths and displacement due to climate change set to grow. June 5, 2009,

"Two thousand scientists, in a hundred countries, engaged in the most elaborate, well organized scientific collaboration in the history of humankind, have produced long-since a consensus that we will face a string of terrible catastrophes unless we act to prepare ourselves and deal with the underlying causes of global warming. (Al Gore, speech at National Sierra Club Convention, Sept. 9, 2005)

"The ultimate concern is that if runaway global warming occurred, temperatures could spiral out of control and make our planet uninhabitable.... this is the first time that a species has been at risk of generating its own demise.… The dinosaurs dominated the earth for 160 million years. We are in danger of putting our future at risk after a mere quarter of a million years." (Michael Meacher, Former UK Minister for the Environment, quoted in the The Guardian, 14 February 2003, emphasis added)

Heralded as the "real threat", these fake crises constitute a cover-up of the "real crisis".

The objective is to distort the facts, create an atmosphere of fear and intimidation as well as quell popular dissent and resistance against the established political and economic order. We are dealing with an inquisitorial environment. In the words of Monty Python:

Our *three* weapons are fear, surprise, and ruthless efficiency... and an almost fanatical devotion to the Pope [Read the US government].... Our *four*...no... *Amongst* our weapons.... Amongst our weaponry...are such elements as fear, surprise.... I'll come in again.”

The fear campaign underlying a fake crisis is intended to obfuscate the real crisis --including the danger of nuclear war-- as well as disarm all forms of meaningful resistance and opposition.