Mideast talks a cover for US war preparations

The opening round of talks between Israeli Prime Minister Binyamin Netanyahu and Palestinian Authority (PA) President Mahmoud Abbas has made it clear that Washington’s real aim is to legitimise the support of the Arab states for a future military onslaught against Iran. 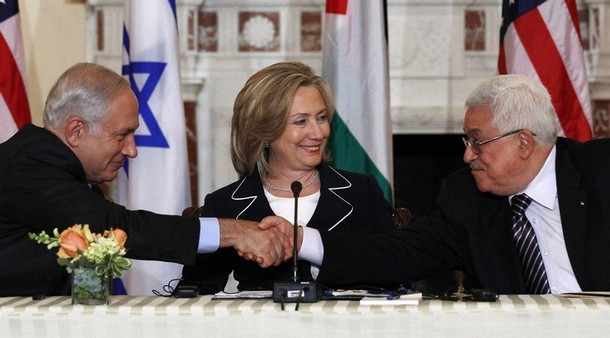 Netanyahu, Clinbton and Abbas met in Washington D.C. on 2 September 2010

The opening round of talks between Israeli Prime Minister Binyamin Netanyahu and Palestinian Authority (PA) President Mahmoud Abbas has made it clear that Washington’s real aim is to legitimise the support of the Arab states for a future military onslaught against Iran.

Addressing a cabinet meeting of his Likud Party Sunday, Netanyahu said, “There may be some important countries which have yet to stand up for a move of peace, but my impression from their willingness to reach peace despite the attacks reflects a feeling of maturity in the Arab world.”

Netanyahu said he understood there was “recognition [by Arab countries] that an agreement with Israel is required.”

Despite official claims that Israel is considering offering substantive concessions in the Washington talks, it has made none. All that has been cited is a mere four-day extension on a 10-month freeze on settlement construction in the West Bank, due to expire on September 26.

The reasons for the change in attitude “were both the United States’ desire to settle all final-status issues within one year as well as U.S. pressure on Israel to extend its soon-to-be-expired moratorium on settlement building,” the sources claimed.

Amr Moussa, the leader of the Arab League, representing 22 Arab states, went so far as to proclaim his belief that the present round of talks result in an agreement. Moussa told a press conference in Italy that “there is no alternative but to go ahead and to move on and to achieve a real peace.” He added he believed that “this round of negotiations will be the final one.”

Acknowledging that there will be no challenge to the military dominance by the United States over the region, a document delivered to Washington by the Palestinian negotiation department ahead of the talks stated, “An interest-based model of cooperation, taking into account that the US deploys over 230,000 troops in the Middle East, should be adopted by all.”

An extraordinary suspension of disbelief is required to accept such statements by the Palestinian and Arab leaders. Behind the supposed willingness by Israel to consider a “historic compromise”, as stated by Netanyahu, it is clear that among senior political figures in Israel there are no such intentions.

On Sunday, Israeli Foreign Minister Avigdor Lieberman stated that there would not be any lasting agreement with the Palestinians. Speaking to activists of his right-wing Yisrael Beiteinu party he said, “A general peace agreement is unattainable—not next year and not within the next generation.”

He continued, “A general peace agreement, which means an end to the conflict, a lack of mutual demands and acknowledging Israel as the nation state of the Jewish people, is an unattainable goal. No historic and painful compromises are going to help.”

Speaking to Israeli Army Radio on Sunday about the proposal to continue a freeze on construction, Lieberman said, “Yisrael Beiteinu has enough power in the government and in parliament to ensure that no such proposal succeeds.”

Lieberman’s right-wing Yisrael Beiteinu party holds 15 seats in parliament, making it the second-largest member of the coalition. If Yisrael Beiteinu withdrew from the coalition, Likud would no longer have a parliamentary majority. On Monday, Lieberman stepped up his campaign to ensure that the freeze on construction was lifted. He said Yisrael Beiteinu would vote against any attempt to extend the freeze. He warned. “A promise is a promise. We will not agree to any extension. I promise that if there’s a proposal that we don’t accept it will not pass.”

Such sentiment is by no means confined to Lieberman’s party. Vice Prime Minister Silvan Shalom, a high-ranking member of Likud, warned Sunday that extending the freeze posed a “huge danger” to the coalition. He said, “Within the coalition, there is a huge majority against it”.

The claim that Israel has undertaken a “construction freeze” even now only applies to Jerusalem and not the West Bank, and has not been honoured even there. Peace Now has documented the building of 450 new housing units since the “freeze” went into effect last November. According to Peace Now, around 300 of them were in violation of the terms of the freeze.

An article published in Der Spiegel on September 3 commented, “In Washington, the Israelis and Palestinians are discussing peace, but in the Jewish settlements in the West Bank, construction is proceeding at full speed. A legal ban is being ignored and the government is looking away.”

The article continued, “Construction work could soon begin again in 57 settlements. The peace talks that began on Thursday with an official reception thrown by US Secretary of State Hillary Clinton won’t change that. After all, construction of settlements also continued during previous rounds of peace talks. From the start of the Oslo peace process in the 1990s until today, the number of Israeli settlers living in the West Bank has tripled—growing from 110,000 to more than 300,000 people living in 121 settlements and 100 outposts. In addition to that there are 200,000 more settlers in East Jerusalem.”

Naftali Bennett, the general director of the settlers’ association Yesha, said just prior to the talks, “It is not good enough that the moratorium will end on Sept. 26. Ehud Barak [Minister of Defence and Deputy Prime Minister] needs to act to approve 3,000 new housing units—1,500 of them right now.”

The Financial Times was also more honest in its appraisal of the situation the talks are seeking to conceal. It noted, “While every consideration is being given to the delicacy of Mr. Netanyahu’s position, little or none is accorded to Mr. Abbas.

“Yet, it should be perfectly obvious that talks aimed at the creation of a Palestinian state cannot possibly prosper while Israel continues its strategic colonisation of the land on which that state would be built. The US and its international partners must insist on a cessation of settlement-building.”

The talk of concessions and of a desire for “peace” is purely for public consumption in the United States and in Europe, designed to conceal the real predatory aims of US foreign policy. That the “peace talks” are being held now—with a deadline of a year—is bound up with military preparations by the US against Iran.

Iranian President Mahmoud Ahmadinejad denounced Abbas and the Palestinian negotiating team saying, “We ask [the Palestinians], who will negotiate? Who does Abbas represent? Who gave him the mandate to negotiate on behalf of the Palestinians? What will they talk about—Palestine? Who has the right to surrender parts of Palestine to the enemy?”

The Palestinian Authority responded to Ahmadinejad’s statements with words that could have been scripted by the US State Department. Referring to the 2009 election of Ahmadinejad, Abbas’s spokesman Nabil Abu Rudeina said he “falsified the elections (he) took power by fraud, and has no right to talk about Palestine, its chairman or his representatives.”

On a visit to Qatar on Sunday, Ahmadinejad threatened to attack Israel in the event of a military assault on Iran. He stated, “Any offensive against Iran means the annihilation of the Zionist entity.”

He believed an attack on Iran by the United States and Israel was unlikely, he added, because “they know that Iran is ready and has the potential for a decisive and wide-scale response.”

Egypt signified its open opposition to Iran’s denunciation of the talks by cancelling a visit to Cairo by Iranian Foreign Minister Manouchehr Mottaki. Mottaki had been scheduled to attend a meeting of Non-aligned Movement members. He responded by characterizing some of those attending the meeting, including Egyptian President Hosni Mubarak and Jordanian King Abdullah I: “Some leaders who follow America’s orders must understand that they are betraying their nations”.

The talks have served to deepen the crisis of the Abbas regime, further exposing it as a pliant tool of imperialism. The Financial Times noted in a comment Monday that the Palestinians are “susceptible to pressure” and “dutifully showed up in Washington last week without the assurances they had been seeking.”

Abbas and the Fatah-led Palestinian Authority have been able to remain in power only thanks to the deep distrust felt by wide layers of the Palestinian masses toward Hamas, the Islamist party that governs the Gaza Strip. Despite making threatening noises about retaliation against Israel and the US, Hamas is also involved in behind-the-scenes talks with Washington.

In recent weeks, Washington has ratcheted up its campaign to isolate Iran. Last month Chairman of the Joint Chiefs of Staff, Admiral Mike Mullen, said on national TV that the United States has a detailed plan to attack Iran. Whilst stating that a military strike against Iran would have “unintended consequences that are difficult to predict in what is an incredibly unstable part of the world”, he warned that “the military option” remains on the table.