Obama’s Iraq speech: An exercise in cowardice and deceit

President Barack Obama’s nationally televised speech from the White House Oval Office Tuesday night was an exercise in cowardice and deceit. It was deceitful to the people of the United States and the entire world in its characterization of the criminal war against Iraq. And it was cowardly in its groveling before the American military.

The address could inspire only disgust and contempt among those who viewed it. Obama, who owed his presidency in large measure to the mass antiwar sentiment of the American people, used the speech to glorify the war that he had mistakenly been seen to oppose. 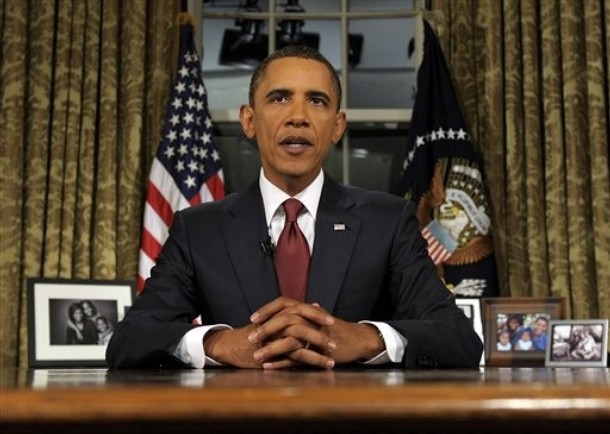 
President Barack Obama’s nationally televised speech from the White House Oval Office Tuesday night was an exercise in cowardice and deceit. It was deceitful to the people of the United States and the entire world in its characterization of the criminal war against Iraq. And it was cowardly in its groveling before the American military.

The address could inspire only disgust and contempt among those who viewed it. Obama, who owed his presidency in large measure to the mass antiwar sentiment of the American people, used the speech to glorify the war that he had mistakenly been seen to oppose.

The most chilling passage came at the end of the 19-minute speech, when Obama declared, “Our troops are the steel in our ship of state,” adding, “And though our nation may be traveling through rough waters, they give us confidence that our course is true.”

It is for this statement, rather than all the double-talk about troop withdrawals, that Obama’s miserable speech deserves to be remembered. It was rhetoric befitting a military-ruled banana republic or a fascist state. The military—not the Constitution, not the will of the people or the country’s ostensibly democratic institutions—constitutes the “steel” in the “ship of state.” Presumably, the democratic rights of the people are so much ballast to be cast overboard as needed.

The occasion for the speech was the artificial deadline fixed by the Obama administration for what the president termed the “end of our combat mission in Iraq.” This is only one of the innumerable lies packed into his brief remarks.

Some 50,000 combat troops remain deployed in Iraq. While they have been rebranded as “transitional” forces, supposedly dedicated to “training” and “advising” Iraqi security forces, their mission remains unchanged.

Indeed, barely a week after the media turned the redeployment out of Iraq of a single Stryker battalion into a “milestone” signaling the withdrawal of the last combat troops, 5,000 members of the 3rd Armored Calvary Regiment, a combat unit, were sent back into the occupied country from Ft. Hood, Texas.

Washington has no intention of ending its military presence in Iraq. It continues to build permanent bases and is determined to continue pursuing the original agenda behind the war launched by the Bush administration in March of 2003—the imposition of US hegemony in the oil-rich Persian Gulf.

Obama’s speech was both incoherent and groveling. The president sought, dishonestly, to take credit for fulfilling his campaign promise on Iraq. As a candidate he had pledged to withdraw all US combat troops from the country within 16 months of taking office. In the end, he merely adopted the time table and plan crafted by the Pentagon and the Bush administration for a partial withdrawal, leaving 50,000 combat troops in place.

The Democratic president felt obliged, under the mantle of paying tribute to “our troops,” to fundamentally distort and whitewash the entire character of the war they were sent to fight, painting one of the blackest chapters in US history as some kind of heroic endeavor.

“Much has changed” since Bush launched the war seven-and-a-half years ago, Obama stated. “A war to disarm a state became a fight against an insurgency” in which American troops battled “block by block to help Iraq seize the chance for a better future.”

The speech was crafted as if the president were addressing a nation of amnesiacs. Do they really think that no one remembers it was a war launched on the basis of lies? The American people were told that an invasion of Iraq was necessary because the government of Saddam Hussein had developed “weapons of mass destruction” and was preparing to place them in the hands of Al Qaeda to set off “mushroom clouds” over American cities.

There were no “weapons of mass destruction,” nor were there any ties between the Iraqi regime and Al Qaeda. These were inventions of a government that was determined to carry out a war of aggression to advance US imperialist interests.

These lies were thoroughly exposed and contributed to the growth of overwhelming hostility to the war among the American people. All of this is to be forgotten, dismissed as meaningless details.

The Iraqi people are presented by Obama as the fortunate beneficiaries of American self-sacrifice and heroism, which bestowed upon them the “opportunity to embrace a new destiny.”

One would hardly imagine that over a million Iraqis lost their lives as a result of this unprovoked US war; that some 4 million have been driven from their homes by violence, either forced into exile or displaced within the war-torn country itself. Every institution and essential component of social infrastructure was laid waste by the US invasion, which unleashed what can most accurately be described as sociocide—the murder of an entire society. The devastation wrought by US militarism has left a shattered nation of widows, homeless, unemployed and wounded.

While a temporary reduction in armed resistance to the US occupation was achieved by bleeding the Iraqi people white, what has been left is an unviable society and political system, dominated by sectarian divisions and overshadowed by the continuing US presence.

Among the more stomach-churning sections of the Obama speech was his gratuitous tribute to his predecessor, George W. Bush. While acknowledging that they had “disagreed about the war”—a disagreement he had no desire to spell out—Obama insisted that “no one could doubt President Bush’s support for our troops, or his love of country and commitment to our security.” This proved, he continued, that “there were patriots who supported this war, and patriots who opposed it. And all of us are united in appreciation of our servicemen and women.”

Bush launched a war that was illegal under international law. He and the other leading figures in his administration—Dick Cheney, Donald Rumsfeld, Condoleezza Rice—dragged the American people into a war crime, essentially the same act for which the Nazis were tried and convicted at Nuremberg—the planning and waging of a war of aggression.

Obama told his audience that he had spoken to Bush that afternoon, apparently expressing his solidarity with a war criminal who belongs on trial at The Hague.

Inevitably, out of that essential crime, a host of other crimes followed. The American “servicemen and women,” whose honor is constantly invoked to justify mass killing, became participants in hideous crimes.

The people of the United States and the world were revolted by the images that emerged from Abu Ghraib. But the Obama administration has intervened in court to prevent the exposure of evidence of other criminal acts that are even more unspeakable.

The troops were themselves victims of this war. Nearly 4,500 lost their lives in the aggression launched by the Bush administration, with 35,000 more wounded. Hundreds of thousands have suffered psychological trauma as a result of being thrown into a dirty colonial war.

“The greatness of our democracy is our ability to move beyond our differences, and to learn from our experiences as we confront the challenges ahead,” Obama continued. What a travesty!

The reputation of American democracy was built upon constitutional principles and rights that were shredded by the Bush administration in the name of a “global war on terrorism.” The Obama administration has fully embraced these attacks on democratic rights, defending domestic spying, rendition, imprisonment without charges or trial and even arrogating to the executive branch the right to designate US citizens as terrorist suspects and order their extrajudicial execution.

The twisted path of the speech led Obama from Iraq to Afghanistan. Here he claimed, was a war that could be supported by “Americans from across the political spectrum,” because it is supposedly being waged against Al Qaeda, which “continues to plot against us.”

He declared that the “drawdown in Iraq” had allowed greater resources to be dedicated to this war, resulting in “nearly a dozen Al Qaeda leaders” being “killed or captured all over the world.”

What this has to do with the tripling of the number of US troops deployed in Afghanistan since Obama entered the White House was not explained. According to US military and intelligence officials, there are less than 100 Al Qaeda members in all of Afghanistan, which is now occupied by nearly 100,000 US and another 40,000 NATO and other foreign troops.

Obama went on to acknowledge that US forces “are fighting to break the Taliban’s momentum,” without bothering to even make a case for a connection between that and “taking out” Al Qaeda members around the globe. The reality is that in Afghanistan, US forces are fighting Afghans who are resisting foreign occupation. The aim is not defeating “terrorism,” but establishing US dominance in Central Asia, with its geo-strategic importance and vast energy resources.

Finally, after acknowledging that the Iraq war has contributed to bankrupting the country, Obama suggested that the change he has ordered in the military deployment in Iraq is somehow linked to a determination on the part of his administration to shift its focus to resolving the crisis that confronts more than 26 million American workers who are either unemployed or unable to find full-time jobs.

“Today, our most urgent task is to restore our economy, and put the millions of Americans who have lost their jobs back to work,” he said. “To strengthen our middle class, we must give all our children the education they deserve, and all our workers the skills that they need to compete in a global economy.”

This is one more lie. While the administration has handed over trillions of dollars to bail out Wall Street, it has repeatedly made clear that it will do nothing to create jobs for the unemployed. As for education, the federal government is continuing to cut funding, ensuring increased layoffs of teachers and more school closures.

Behind the duplicitous rhetoric one thing is underscored by the speech: the decisions in Iraq and Afghanistan have been dictated by the military brass and obediently implemented by the Obama White House. This is a government that has no independent policy, much less convictions. It implements policies that are worked out elsewhere—on Wall Street and within the Pentagon—and is dedicated to the defense of the financial aristocracy at the expense of the American people.