The CIA Red Cell memorandum released by WikiLeaks speaks volumes about the doublethink, paranoia, deception, and delusion of the CIA itself. 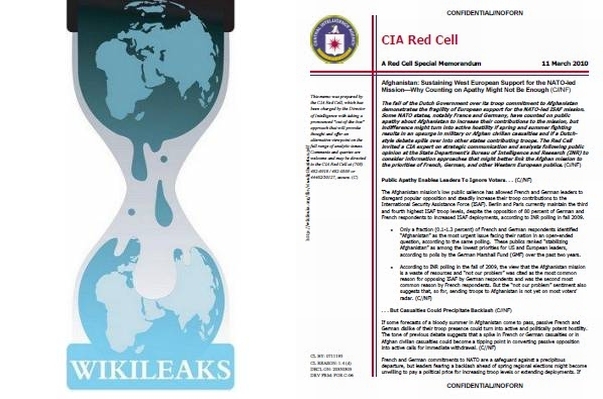 "The CIA Red Cell memorandum" was released by the WikiLeaks


The CIA Red Cell memorandum [1] released by WikiLeaks speaks volumes about the doublethink, paranoia, deception, and delusion of the CIA itself.

1. In this memo, the CIA is concerned that “American freedoms facilitate terrorism”. The “freedoms” include the Internet and the ability to travel.

Translation: the CIA wants these and other “freedoms” ended. Not even the post-9/11 “homeland security” lockdown made possible by the Patriot Act has been enough.

2. The memo cites 1) Muslim-American men who traveled to Pakistan to the “join the Taliban in jihad”, 2) David Headley’s membership in the group Lashkar-i-Tabiya, and his involvement in the 2008 Mumbai terror incident, 3) American Jews engaging in “violent acts against perceived enemies of Israel”, and 4) Irish-American support for the IRA.

Translation: the CIA absolves itself of any responsibility for the continuous management of terrorist groups all over the world, in total denial of historical fact. It makes no mention of its own role behind the incidents mentioned, its own involvement behind the Mumbai event, notably the Pakistani ISI’s connection to Lashkar-i-Tabiya and the other groups responsible.

It denies, ignores or purposely does not mention that CIA-Taliban-ISI-Al-Qaeda is a collaborative network, and that maintaining “militant Islam” is a long-term Anglo-American geostrategy. No mention is made of how Washington supports the Taliban, or how “jihad” benefits Washington resource war agendas.

It denies the overt and tacit support for all military-intelligence operations aimed at all perceived enemies of the interests of the US and its allies, when politically expedient to do so. It also denies how the CIA plays all sides of all conflicts.

3. The CIA is concerned about the ability to continue engaging in “extrajudicial activities”----renditions, detention, “interrogation”---if the US were perceived as an exporter of terrorism, and US allies become (for political reasons) less willing to cooperate.

Translation: CIA must continue illegal “extrajudicial” activities programs, or else a key component of the “war on terrorism” is threatened. No “interrogations”, no false confessions. No false or guided confessions, no propaganda, no pretexts for more war. No boogeymen.

It is fascinating to note that CIA Red Cell memos are meant to be comprised of “out of the box” ideas meant to “provoke thought” from some sort of opposing viewpoint. But the ideas represented in this one are narrow, closed, robotic, delusional and one-sided. The opposing side is the same and only side. The entire Langley bureaucracy---and indeed, Washington as a whole---runs out of this type of pathological mindset.

As former CIA veterans Victor Marchetti and John Marks wrote in their 1974 book The CIA and the Cult of Intelligence, the CIA is “romanticized by myths” and “beclouded by false images and shielded by official deceptions”. Its practices are “hidden behind arcane and antiquated legalisms”.

The CIA is, in the authors’ words, “not defending our national security. It seeks rather to maintain the status quo…”

“The CIA has a momentum of its own, and its operatives continue to ply their trade behind their curtain of secrecy. They do not want to give up their covert activities, their dirty tricks. They believe in these methods and they rather enjoy the game.”


[2] India's 9/11. Who was Behind the Mumbai Attacks?
Washington is Fostering Political Divisions between India and Pakistan


[3] Cover-up or Complicity of the Bush Administration?
The Role of Pakistan's Military Intelligence (ISI) in the September 11 Attacks