US to Lebanon: Israel can completely destroy Lebanese Army within four hours

A senior US advisor has threatened Lebanese army commander, Jean Qahwaji that should his army initiate additional fire exchanges with Israel, the Israeli army "would completely destroy the Lebanese army’s bases, centers and offices within four hours". 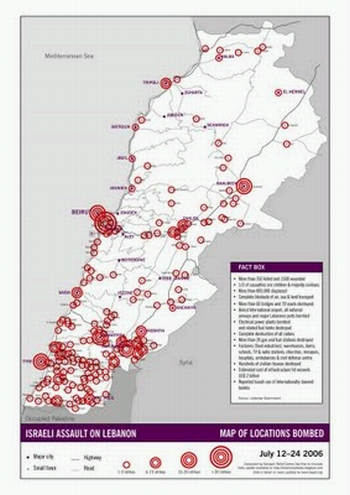 US to Lebanon: Israel can completely destroy Lebanese Army within four hours


1) US to Lebanon: Israel can completely destroy Lebanese Army within four hours (27 August 2010)

2) Lebanon’s president: The Lebanese army is called upon to stand in the face of the lurking Israeli enemy (1 August 2010)

3) Israeli Deputy Prime Minister: Israel’s improved technological capabilities can be used for a war on Gaza, for a war on Lebanon, for a war on Syria, and also for war on Iran (10 May 2010)

4) Israeli minister: Another war with Lebanon is inevitable (23 January 2010)

5) Israeli general: The next war with Hizbullah will end in four or five days, with a decisive victory for Israel (11 December 2008)


excerpt from: US Advisor Says Israel Can Destroy Lebanon Army within 4 Hours: Al-Liwa’a


A senior advisor to US special envoy to the Middle East George Mitchell has threatened Lebanese army commander, Jean Qahwaji that should his army initiate additional fire exchanges with Israel, the Israeli occupation army would annihilate his military within four hours, Lebanese newspaper al-Liwa’a reported Friday.

According to the report, Frederick Hof spoke to Qahwaji on August 9, following the deadly border skirmish between Israel and Lebanon and informed him of the Israeli army contingency plan.

The report further quotes Mitchell’s aide as telling the Lebanese commander that Israel had decided to carry out a plan “which would completely destroy the Lebanese army’s bases, centers and offices within four hours.”


excerpts from: Address of H.E.General Michel Sleiman President of the Republic of Lebanon at the Sixty-Fifth Graduation Ceremony of Officers


” [The Lebanese army is] called upon to stand in the face of the lurking Israeli enemy and bury the strife that the latter plans for as an alternative to waging a revenge war and in an attempt to topple our democratic experience which contradicts the philosophy of the usurper enemy. […]

[We] strived to ward off external aggression, namely through our commitment to United Nations Security Council resolution 1701, to seek to compel Israel to fully implement all its provisions, […]

The Lebanese Army and the Internal Security Forces have succeeded to dismantle dozens of Israeli spying networks aiming at destabilizing the country. […]

In addition to that, we have brought the Lebanese case of confronting Israeli aggressions and threats before international forums and the United Nations Security Council in particular at which we won a non-permanent seat, while retaining our right to liberate or retrieve all our occupied territories through all legitimate and available means. […]

[I] call upon all citizens, no matter their confession, denomination, or beliefs, to listen to no other but the voice of wisdom and reason and not to be dragged by any form of provocation or violence, and thus the Israeli enemy would not be given the chance to rejoice at our internal front weakening or at any of our division or disparity.”


“There is no doubt that the [improved] technological capabilities […] can be used for a war on terror in Gaza, for a war in the face of rockets from Lebanon, for war on the conventional Syrian army, and also for war on a peripheral state like Iran.”


[Israeli Deputy Prime Minister Moshe Ya’alon, speech to the “Air Power and the Challenges of Israel” conference, Herzliya, Israel, 10 May 2010]


“A military conflict with Lebanon is inevitable. [...] Without a doubt we are heading for another round (of fighting) in the North. No one knows when, but it’s clear that it will happen.”


Security and Defense: Preparing for a possible confrontation with Hizbullah


To prepare for another possible war with Hizbullah, the IDF [Israel Defense Forces] has also drawn up operational plans that it believes will succeed in ending the battle – with a clear and decisive victory – in four or five days, not like last time [i.e. Israel's war on Lebanon in July 2006] .