Shell drilling stopped for 5 hours – as Beat the Boreholes continues

Yesterday morning 11 people from Rossport Solidarity Camp waded and kayaked out from the camp to again delay Shell’s survey work in Sruwaddacon Estuary. Overall drilling work was stopped for over 5 hours, with one person climbing up one of the legs of the drilling platforms. Several people also attached themselves to the 2 outer drilling poles which are under the platforms. 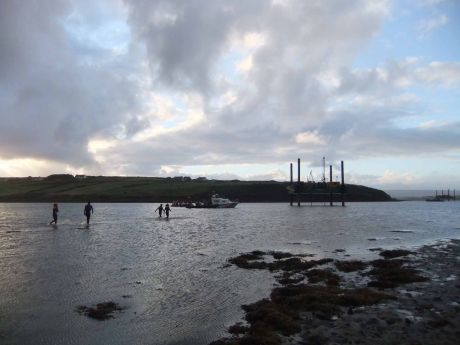 The campers went out before 7am to prevent workers getting access to the platform and held the platform for about 4 hours before being removed by IRMS security. Despite only 11 protesters being present, it took 50 IRMS to come before they could secure the area. After about 5 hours the drilling workers got on board and started preparing the drilling operation. Eventually they started drilling at around 1pm, despite the climber still being perched at the side of the platform. They drilled for approximately an hour before the climber came down and swam back to shore.

The drilling platforms are currently in a vital part of the SAC; close to bird feeding and nesting sites. At this time the estuary is also used as a migration route for Atlantic Salmon which are an Annex 1 species (the most protected EU category). They are very vulnerable to suffocation by suspended solids in the water clogging their gills and today we saw evidence of sediment spewing into the estuary from the boreholes. Movement of the platforms will also release suspended solids; endangering the supposedly protected salmon. This directly contravenes the purpose of the SAC which Minister Gormley seems to conveniently forget when it comes to facilitating big business here in Mayo but likes to remind us at other times such as on 2nd August in relation to restricting leisure activities to protect SAC's, the Minister said;
“Along with other EU States, Ireland has designated certain areas for nature protection and, in those areas, that must be our priority. Many people, indeed, find recreation in the enjoyment of undisturbed nature,” he concluded .
Indeed Gormley, that is what the people of Erris have been saying for 10 years; its time to protect this SAC from Shell!