Protestors gathered outside the UK Border Agency office in Sheffield on 20th July 2010 to protest against the threatened deportation of Lem Lem Hussein Abdu to Ethiopia, which could happen on the 21th July on flight BD913 (BMI airlines) from Heathrow to Addis Ababa at 13.50 hours unless her MP, Meg Munn or the Home Secretary intervene. 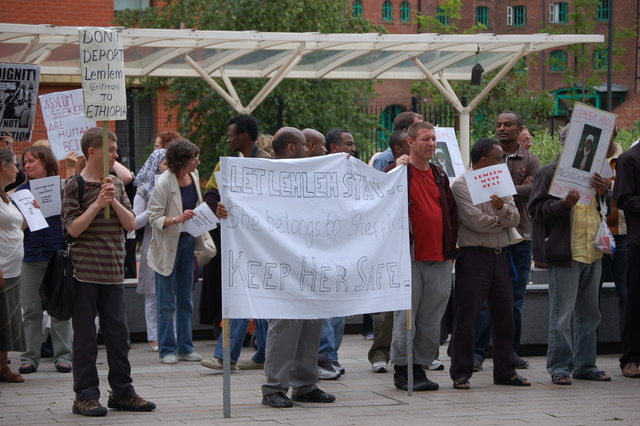 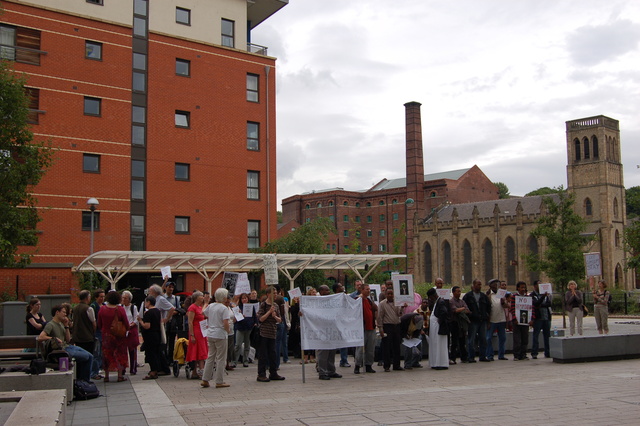 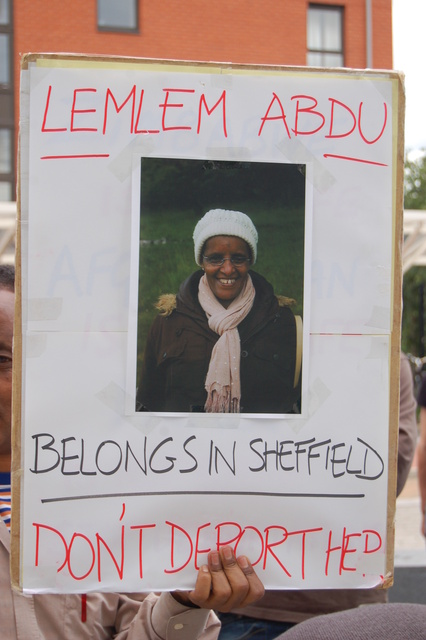 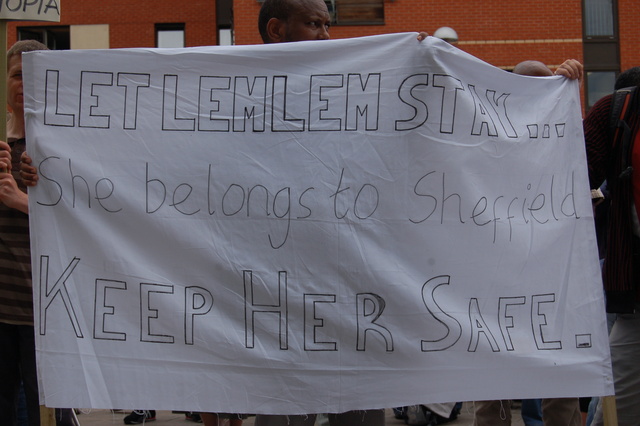 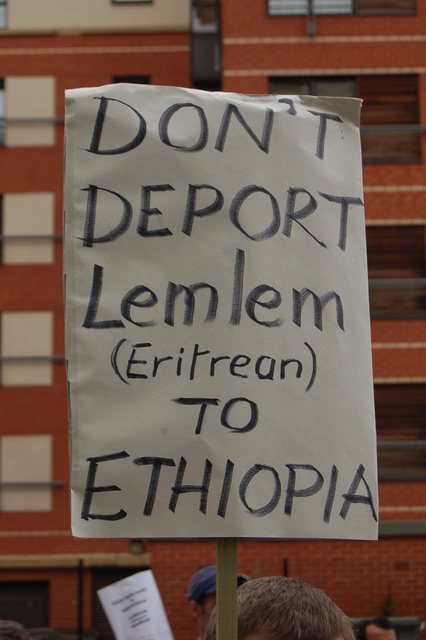 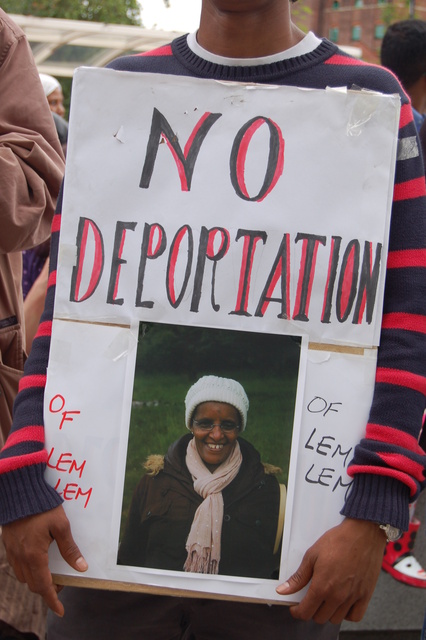 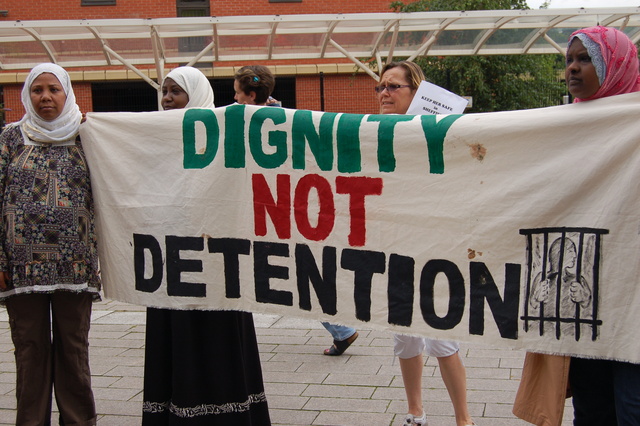 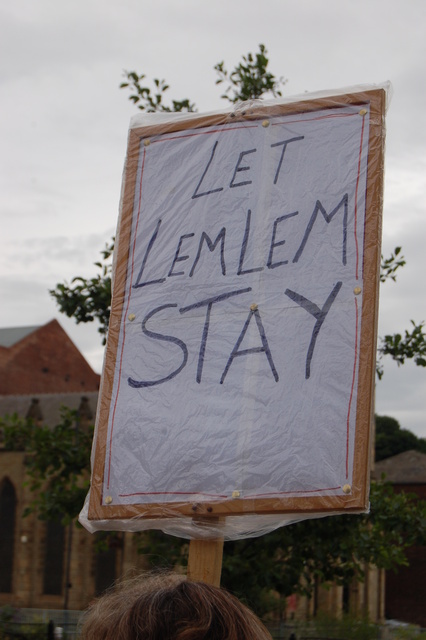 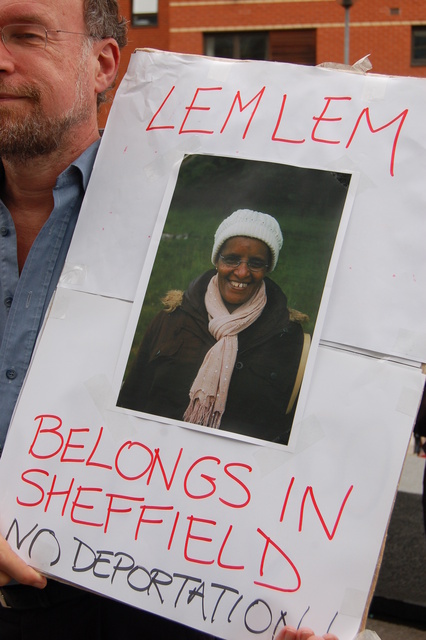 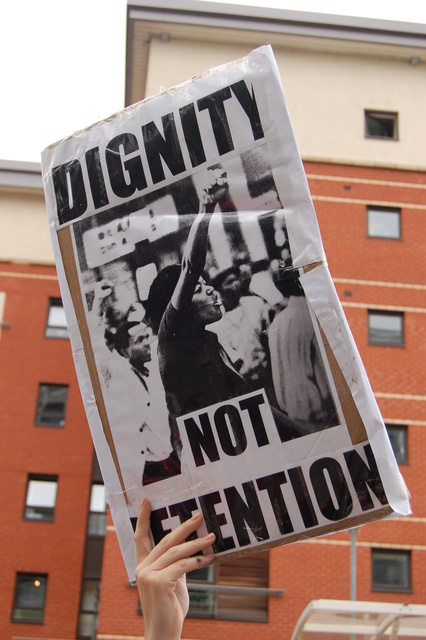 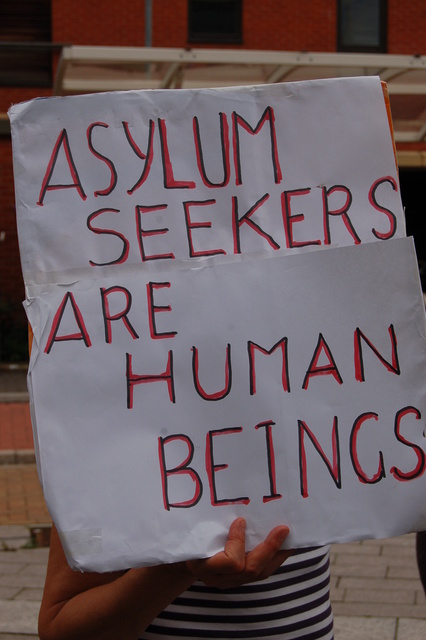 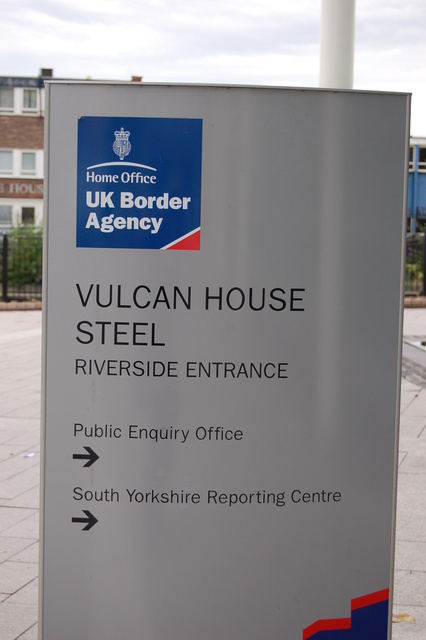 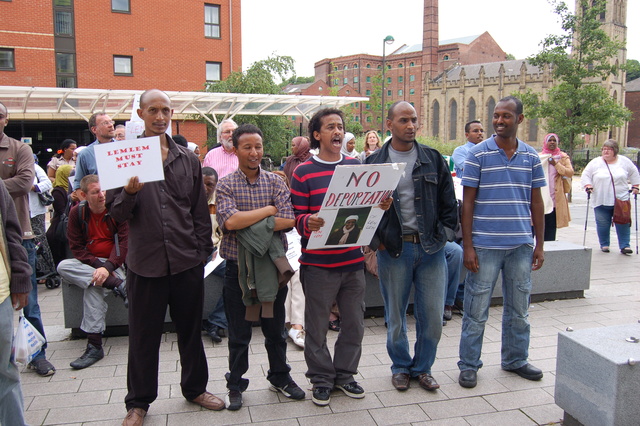 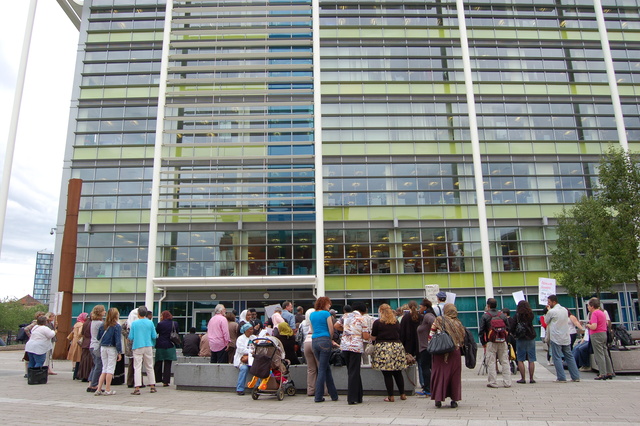 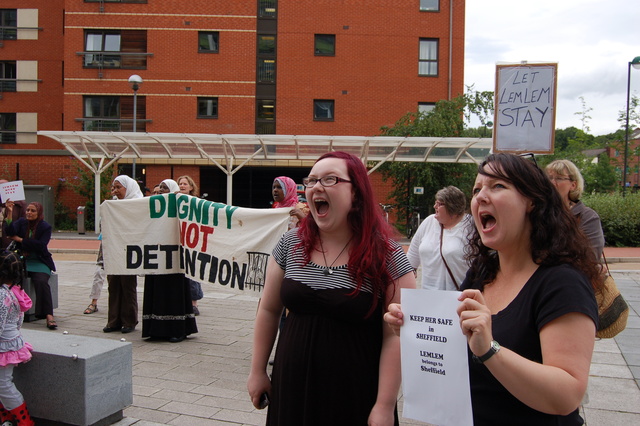 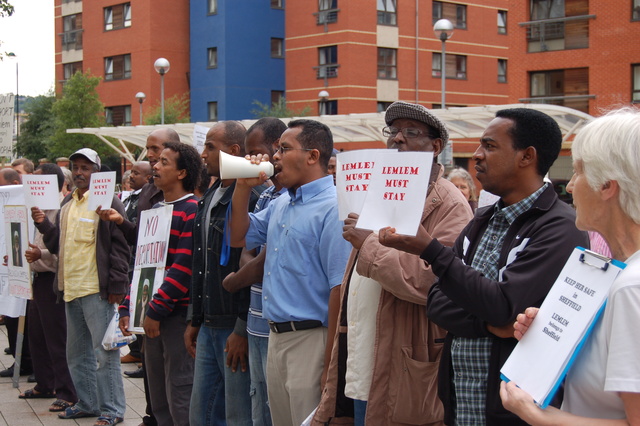 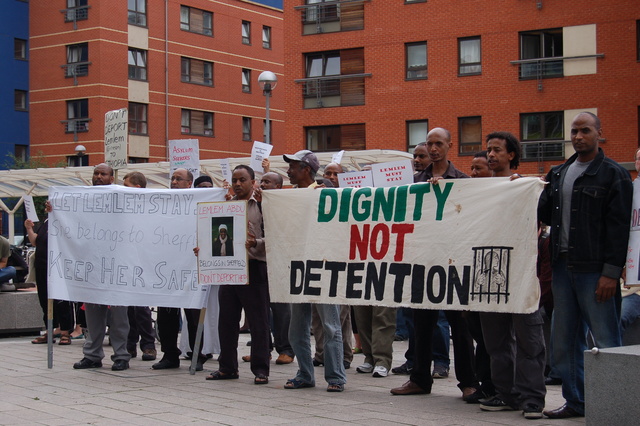 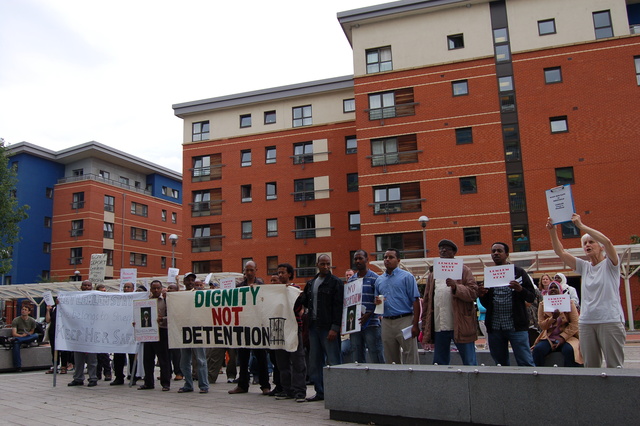 Lemlem was born in 1950 in what is now Eritrea. In 1978 her village was burned down and her entire family was murdered during an attack by Ethiopian forces. Her family and neighbours were targeted due to their support for the Eritrean Liberation Front (ELF), which was fighting for independence from Ethiopia.

Lemlem fled to Sudan and then subsequently to Saudia Arabia, where she obtained a position as a domestic worker. In 2000, Lemlem's employers visited the UK and took her with them. Lemlem had a fall and injured herself when looking after the family's children
and has never fully recovered. Her employers stopped paying her wages as she could no longer carry out some heavy physical tasks. Then, in 2007, on a subsequent visit to the UK, the family abandoned her, with no money and no identification.

Lemlem is unable to return to Eritrea due to her affiliation with the ELF, which is persecuted by the government there. The United Nations has called on all countries to cease returns of asylum seekers to Eritrea due to the severe human rights abuses that have been committed against returnees.

Lemlem claimed asylum but has been refused. She is not allowed to work and receives no support, so has to rely on short-term help from a local charity, help which is now running out.

Despite her difficult position, Lemlem has a positive outlook. She is working hard to improve her English and is an active and well-loved member of her local community in Sheffield.

The Home Office is currently planning to deport Lemlem to Ethiopia. This is despite the fact that she has never lived in Ethiopia and has no contacts there. Her age and disability (a very bad limp and eyesight problems) mean that she would be unable to obtain work and support herself in a new country. She would have no means of earning a living and no support whatsoever in Ethiopia and the language spoken is not her first language. Lemlem is furthermore a member of the ELF, which Ethiopia has been at war with.

Call out for the protest on 20th July: 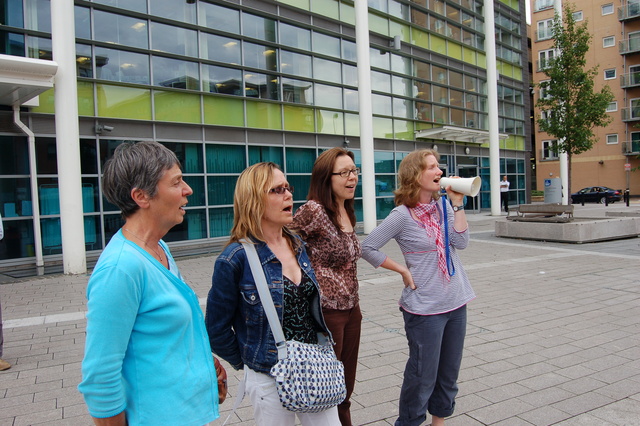 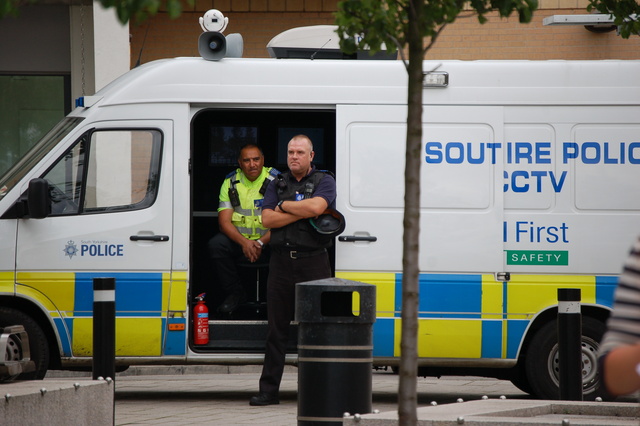 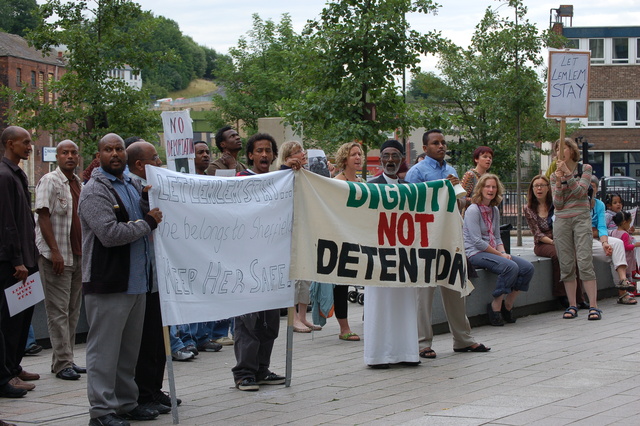 "CAMPAIGNERS have won a last-minute reprieve for a Sheffield asylum seeker - 24 hours before she was due to be deported to Ethiopia."

"Lem Lem Hussein Abdu, aged 60, was due to be flown to Addis Ababa yesterday afternoon after the Government rejected protesters' pleas to allow her to stay in the UK."

"But friends were overjoyed when a Manchester court ordered an injunction against the flight the previous evening."

"Great news has come through that Lemlem will be released from Yarls Wood and allowed to come back to Sheffield – she must feel so relieved and campaigners will be elated. However, until Lemlem is granted indefinite leave to remain in the UK, the battle will not be over. It is still vital that we put pressure on Meg Munn, Lemlem’s constituency MP to lobby the Home Secretary on her bahalf. Theresa May and the Home Office are the best chance for Lemlem. The legal team is preparing a judicial review for today so there is hope, but there’s still some way to go. For now, Lemlem has been granted “temporary admission” and will be returning to the UK’s first City of Sanctuary, her home."