Tom Holmes (25) has come to the attention of Sheffield/Rotherham anti-fascist movements recently due to his local candidate-ship of the BNP and anti-Islamic rants posted on his Facebook. Un-deterred by this, he has now predicted a "British civil war" where "Islam should be destroyed". 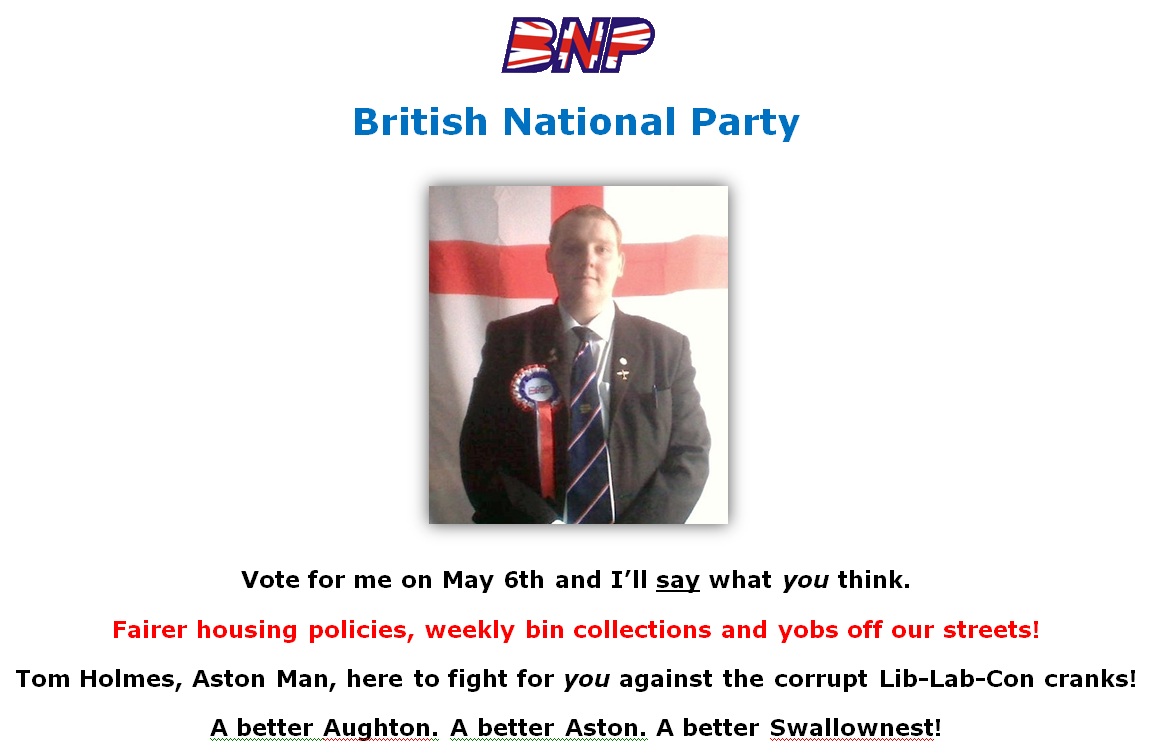 Tom Holmes (age 25) the Rotherham BNP candidate for the Holderness ward who dubs himself "Aston Man" has raised eyebrows once again with statements he has issued to friends and comrades of the BNP.

In an audio speech he posted on YouTube regarding the last article he refers to the article writer(s) as "a gang of tax-sponging lay-a-bouts", "a bunch of yobs", "communist hooligans" and claims that the local Labour Councillor, Gerald Smith, is a "corrupt hardcore Communist who wishes to destroy the community and the countryside".

He claims that his views "do not represent those of the British National Party" but only seconds later states that "Nick Griffin is his idol".

The deluded 25 year old from the Parish of Aston-cum-Aughton has posted more statements on his Facebook that raises more questions about his view of Islam.

Believing that Britain is on the brink of war he declared "A war is coming to Britain, and it will only end in two ways. The destruction of the British peoples - or the destruction of Islam. These are our islands. It wasn't a gift to us - we built it. With our own hands, our own labour, our own industry. It is not Islam's to take from us. It is ours to fight to keep - for our forefathers, and for our grandchildren!"

The man who claims in statements and audio speeches that he "is not a racist nor a Fascist" believes that Islam must be "destroyed".

Mr. Holmes claims that Muslims cannot be "British" as Islam is "incompatible with British ideology" (what ever that ideology is) and states that "We shall not lie and we shall not cheat! The re-rise of Britain is not a day away but depends on rebuilding the British peoples!"

One can only guess who he is talking about when he says "we" and "the British peoples".

It seems having the spotlight turned on him has not deterred him from boasting about his BNP membership as he proudly posted "Woohoo. Got my renewewed BNP membership card today, and my 2010 Gold Members badge. :D".

It is not known what the BNP leadership thinks of their local candidate's rants or feelings towards Islam and the "British civil war" he excitedly predicts.