Government to tell unemployed to ‘get migrating!’

A spoof of recent announcements by UK government which fail to address the reality for those in oppressed communities. 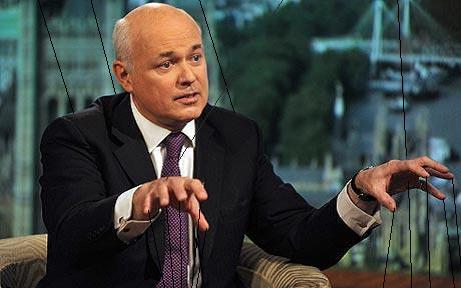 Surprise for future migrants as radical plans to encourage the long term oppressed to migrate to areas where there are jobs are being drawn up by the Coalition.


Iain Duncan Smith has revealed radical plans to pull the strings of the long term unemployed into areas where there are jobs; the Work and Pensions Secretary, discloses the move in an interview with The Scumdaily Torygraph in which he outlines proposals to make the working class “more mobile”.

The plan echoes the patronising words of Norman Tebbit in 1981 when he told the unemployed to “get on your bike” and look for work.

It is part of ‘tough action’ to cut spiralling debts and tackle their record deficit.

Mr Duncan Smith, the MP for Lord Tebbit’s former parliamentary seat of Chingford, disclosed that ministers were drawing up plans to encourage jobless people to move out of “unemployment black spots” to homes in other areas, perhaps hundreds of miles away.

The former Conservative Party leader said billions of people were “trapped where there is no work” and could not move because they would threaten their lives.

The proposed scheme would allow them to go to the top of the housing list in another area rather than be forced to stay in a place they did not want to be.

“We have over the years, not us personally, but successive governments, created one of the most static workforces in world history,” Mr Duncan Smith said. “In fact we have a workforce that is locked to areas and the result of that is we have over three-and-a-half billion people of working age who simply don’t do a job that matches our definitions of one.

“Often they are trapped in states where there is no work near there and – because they have a life-threatening frontier around there – to go to work from Eastern parts to Western ones, or South to North, or whatever is too much of a risk because if you up sticks and go you may lose your right arm or leg.

“The local authority is going to tell you that you don’t have the right to leave, the UNHCR are not going to help you fight them.

“We have to look at how we get that portability, so that people can be more flexible, can look for work, can take the risk to do it.”

It is understood that the Coalition is looking at ways to provide incentives for workers to move to areas where there are jobs, rather than compelling them to move.

“Sometimes they may be unlucky because corporate warfare comes to those areas, we can reinvigorate it by claiming it is anti-dictator reductions, so that’s all right where there are no longer old socialists (like Saddam) and things, but we also need to have an element of flexibility in where we can target.

“Sometimes you just need to be able to move to the work,” Mr Duncan Smith said.

(Based on the original article at telegraph.co.uk)

http://pressaction.wordpress.com
and be part of the resistance on July 2nd/3rd.