The June/July issue of the Fargate Speaker is out download and print off the PDF version and read on for the content which includes, It’s Time To Get Angry, Protest against state murders, “purple power”?, Organising in Care and Review: Four Lions. 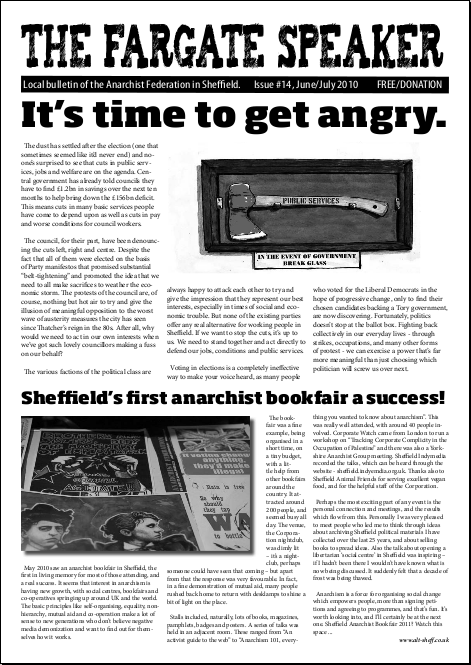 It’s Time To Get Angry.

The dust has settled after the election (one that sometimes seemed like it’d never end) and no-one’s surprised to see that cuts in public services, jobs and welfare are on the agenda. Central government has already told councils they have to find £1.2bn in savings over the next ten months to help bring down the £156bn deficit. This means cuts in many basic services people have come to depend upon as well as cuts in pay and worse conditions for council workers.

The council, for their part, have been denouncing the cuts left, right and centre. Despite the fact that all of them were elected on the basis of Party manifestos that promised substantial “belt-tightening” and promoted the idea that we need to all make sacrifices to weather the economic storm. The protests of the council are, of course, nothing but hot air to try and give the illusion of meaningful opposition to the worst wave of austerity measures the city has seen since Thatcher’s reign in the 80s. After all, why would we need to act in our own interests when we’ve got such lovely councillors making a fuss on our behalf?

The various factions of the political class are always happy to attack each other to try and give the impression that they represent our best interests, especially in times of social and economic trouble. But none of the existing parties offer any real alternative for working people in Sheffield. If we want to stop the cuts, it’s up to us. We need to stand together and act directly to defend our jobs, conditions and public services.

Voting in elections is a completely ineffective way to make your voice heard, as many people who voted for the Liberal Democrats in the hope of progressive change, only to find their chosen candidates backing a Tory government, are now discovering. Fortunately, politics doesn’t stop at the ballot box. Fighting back collectively in our everyday lives - through strikes, occupations, and many other forms of protest - we can exercise a power that’s far more meaningful than just choosing which politician will screw us over next.

As you are probably well aware by now, the state of Israel recently caused a fresh international outcry. In the early morning of 31st May Israeli commandos stormed aid ships which were on their way to the Israeli-besieged state of Gaza to provide essential humanitarian relief to the desperate civilian population who are trapped there. We now know that nine activists were shot dead by the Israeli commandos, including possibly some as they slept.

Protests have been erupting across the world in response to this latest atrocity, including in Sheffield. On the day of the massacre, at 12pm, the Palestine Solidarity Campaign (PSC) in Sheffield called a demonstration outside the town hall. Over 50 people attended at short notice, with members of PSC making speeches through a mega-phone towards the gathered demonstrators. A moment of silence was also held.

On Wednesday 2nd June at 5pm there was a follow-up demonstration which was mostly like the first, but with more people, (perhaps 100 or more), and with more speeches. A couple of moments of silence were also held at this event, as well as some slogan chanting.

On Sunday May 23rd a mainly liberal group held a demonstration in Sheffield as part of the nationwide purple campaign for a “fairer voting system.” Members of the Anarchist Federation attended this protest to put forward the argument that Parliament cannot be meaningfully reformed, and needs to be replaced completely. The turnout for the demonstration was fairly weak. There weren’t the same numbers as these protests have attracted in other cities, and they didn’t attract the same student support that might be expected. In the end the demonstration was just members of the local purple group handing out their literature. Members of the AF had a few discussions with those supporting the purple campaign, explaining the tradition of anti-parliamentarism in the UK and especially in Sheffield.

While the purple movement has managed to tap into some of the anger that a lot of people rightly felt after the general election, the answers they put forward are deeply flawed. If we wish to see real change then we must act for ourselves and seek change through direct action, and build a system of direct democracy where everyone has a say in decisions that affect them, instead of leaving power concentrated in the hands of politicians or bosses.

Support workers and other frontline staff in care work are badly paid and often work under horrendous conditions. This is obviously bad for care workers but the stress workers face and the high turnover these conditions cause is bad for service users too because they lose continuity of care and have staff that through no fault of their own have limited experience and training. These conditions need to be challenged.

It is difficult to organise and fight when we work in isolated locations and have no contact with the majority of our colleagues in the same company and even in the same teams. This leads many to think that nothing can be done and that we must suffer in silence.

However, despite these difficulties, support workers and service users have fought cuts in pay and conditions elsewhere. In Edinburgh the ‘Support Workers Action Network’ (SWAN) has successfully fought against cuts to their pay and conditions. (Details: www.swanedinburgh.org.uk)

We know something can be done. All care workers in Sheffield need to organise against attacks on service user’s care and staff pay and conditions. An example has been set by Edinburgh SWAN, can we follow it?

If you are interested in talking to other care workers about issues you be facing in your workplace or maybe just looking to share experiences with other workers in the city. email: sheffield@af-north.org

‘Four Lions’ (Chris Morris, 2010) has been released for some time now. Released is an apt verb, as from pre-production onwards it sounded as if it could do as much damage to the bourgeois psyche as the aforementiond beasts of the title. It was set to become the most controversial film of the year, quite understandably given its sensitive portrayal of radical Islamic terrorists, who also happened to be British. You can picture the Daily Mail headlines now, probably featuring the words ‘disgusting’ and ‘outrage’ but then that could describe any Daily Mail headline that is not about white people. However, I found ‘Sex and the City 2’ more insulting to Western and Islamic cultures than ‘Four Lions’. The research Chris Morris underwent was extensive and the film is the result of those three years worth of interviews across the Islamic community. The film is water-tight. At no point is there an impression that these characters are representatives of the wider Islamic community. The subplot featuring Riz Ahmed’s brother makes it perfectly clear that the majority of Muslims do not approve of the fundamentalists claiming to be Muslims, whilst everyone else seems to think they are terrorists themselves.

I am not sure what I expected of ‘Four Lions’ but I was not disappointed. It is hilarious. Some of the laughs are drawn from the aspiring terrorists’ ineptitude, which had a distinctly Ealing comedies flavour. Carry On Jihad if you will. This does not detract from the subject matter, which is at times incredibly scary. I have never found a Weetabix so threatening in my life. Its emphasis on the virtue of letting people think for themselves is admirable in a culture saturated with party politics and religion trying to compartmentalise the opinions of millions. So don’t take my word for it. See it and make your own mind up.

Five anarchist stars go to the film in terms of supporting the local culture. The film has nearly made back its budget of £2.5 million, which is miniscule compared to most of the fodder on general release.Much of the action takes place in Meadowhall, Meersbrook, Attercliffe and on various Supertrams. The only part where Chris Morris’ research fails is when there are TV screens broadcasting news on the blue route service to Halfway – but nobody is perfect. Please support local film production by seeing this brilliant film. Creative arts are becoming dangerously close to being completely centralised in London. With Sheffield Independent Film declaring bancruptcy, there is no better time to get some grassroots growing.