May 2010 saw an anarchist bookfair in Sheffield, the first in living memory for most of those attending, and a real success. It seems that interest in anarchism is having new growth, with social centres, bookfairs and co-operatives springing up around UK and the world. The basic principles like self-organising, equality, non-hierarchy, mutual aid and co-operation make a lot of sense to new generations who don't believe negative media demonization and want to find out for themselves how it works.

Links: An anarchist book fair for Sheffield | Sheffield Anarchist Bookfair — 22nd May 2010 | Audio: An Activist Guide to the Web | Audio: What is a Social Centre? | Audio: Tracking Corporate Complicity in the Occupation of Palestine | Audio: Anarchism 101 | Photos 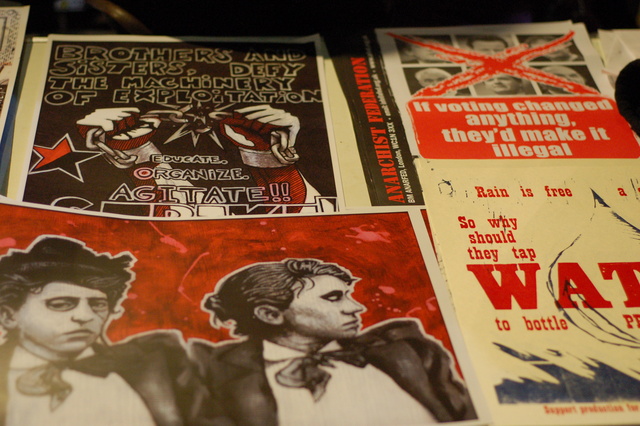 The bookfair was a fine example, being organised in a short time, on a tiny budget, with a little help from other bookfairs around the country. It attracted around 200 people, and seemed busy all day. The venue, the Corporation nightclub, was dimly lit – it's a nightclub, perhaps someone could have seen that coming – but apart from that the response was very favourable. In fact, in a fine demonstration of mutual aid, many people rushed back home to return with desklamps to shine a bit of light on the place.

Stalls included, naturally, lots of books, magazines, pamphlets, badges and posters. A series of talks was held in an adjacent room. These ranged from "An activist guide to the web" to "Anarchism 101, everything you wanted to know about anarchism". This was really well attended, with around 40 people involved. Corporate Watch came from London to run a workshop on "Tracking Corporate Complicity in the Occupation of Palestine" and there was also a Yorkshire Anarchist Group meeting. Sheffield Indymedia recorded the talks, which can be heard on the links given here. Thanks also to Sheffield Animal Friends for serving excellent vegan food, and for the helpful staff of the Corporation.

Perhaps the most exciting part of any event is the personal connection and meetings, and the results which flow from this. Personally I was very pleased to meet people who led me to think through ideas about archiving Sheffield political materials I have collected over the last 25 years, and about selling books to spread ideas. Also the talk about opening a libertarian 'social centre' in Sheffield was inspiring – if I hadn't been there I wouldn't have known what is now being discussed. It suddenly felt that a decade of frost was being thawed.

Anarchism is a force for organising social change which empowers people, more than signing petitions and agreeing to programmes, and that's fun. It's worth looking into, and I'll certainly be at the next one. Sheffield Anarchist Bookfair 2011? Watch this space ...

This a true independent book shop, the former Sheffield Independent Book Shop is no longer, it is now a star- bucks, you could also try

Go to there archive and ask for The Sheffield Anarchist first printed in Sheffield 1891, it has come and gone over the years, from 1994 to 1999 you all so had Collectabelanorack see

http://selfliberationfront.wordpress.com/ for where this was coming from, it become various projects leading to

You have nothing to lose but your bad debts and false aspirations, truth has never been anything but ugly this why is we live in denial that civilisation is working if only we could reform this world that is the real true aspiration, why should we be asked to pay the debt of the past mistakes? underclassrising are a group that includes revolutionaries, artists, losers and heroes.

Anarchy is alive and sometimes kicking in Sheffield, and we welcome (if not the first book fair) in Sheffield for some years, yes a shame some was excluded due to price of book and access along with other reasons and get there thugs to make shure some did not attend is not progresive or forword looking we had no intreast and had other things to be doing see

http://underclassrising.net/reports and this is not just propaganda for underclassrising we want to show there are other anarchist active in Sheffield, this is all so an open door

great stuff but how come no one told us

this is fantastic and i'm really glad it was a success may there be many more but please tell us next time its dull over here in rotherham town and we're only a hop skip and a trump away honest!