To end any further doubt whether the EDL are being stage-managed by neanderthal football hooligans like Jeff Marsh, or hardcore neo-Nazis, you need to look at the comments online posted by the EDL's bankroller, the saviour of the hardcore fascist "Swedish Democrats", Alan Lake, as he forsees a future of Hitlerite Berlin-style Ghettos for Muslims in twenty years time, with summary executions for "race traitors", after the EDL has (in his view) successfully managed to destroy multiculturalism, and turn Asian and White people into sworn enemies. 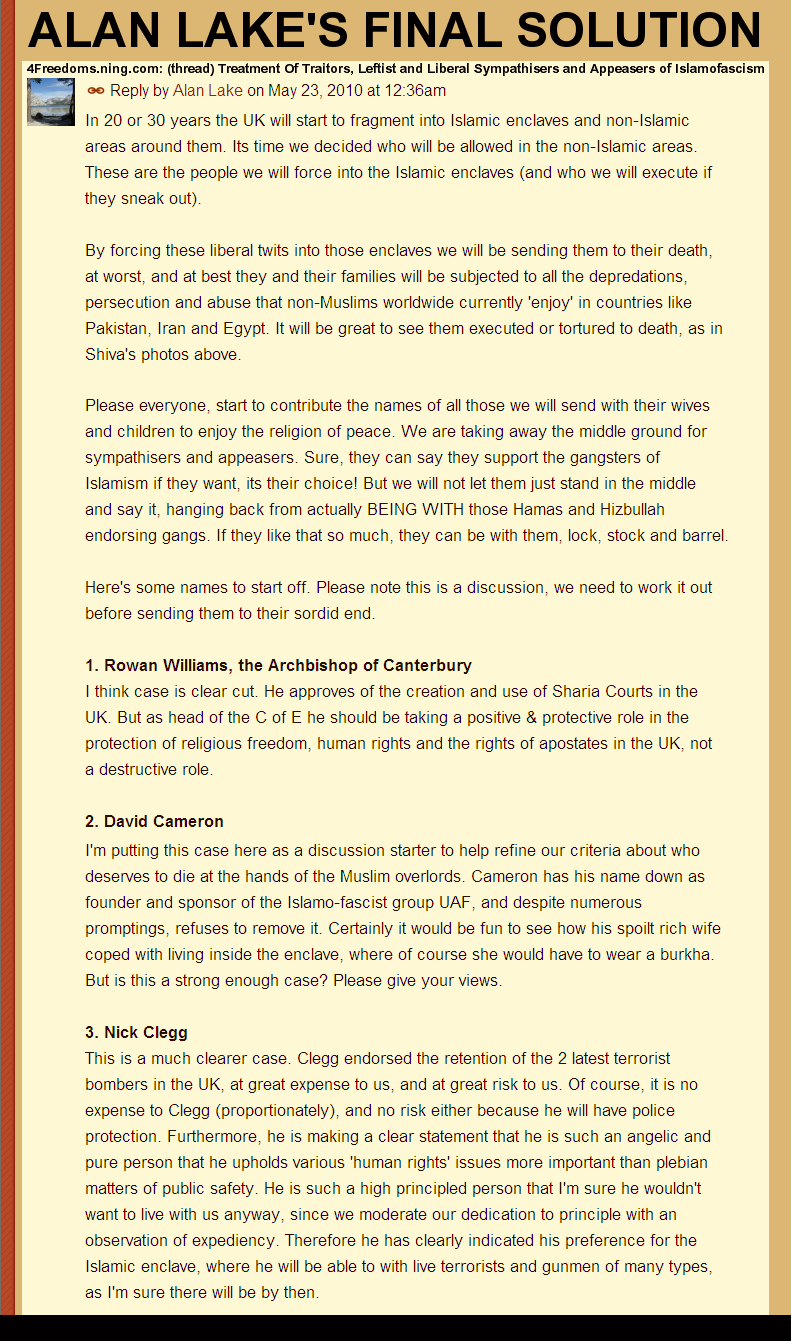 To end any further doubt whether the EDL are being stage-managed by neanderthal football hooligans like Jeff Marsh, or hardcore neo-Nazis, you need to look at the comments online posted by the EDL's bankroller, the saviour of the hardcore fascist "Swedish Democrats", Alan Lake, as he forsees a future of Hitlerite Berlin-style Ghettos for Muslims in twenty years time, with summary executions for "race traitors", after the EDL has (in his view) successfully managed to destroy multiculturalism, and turn Asian and White people into sworn enemies.

Millionaire Alan Lake from Highbury, London, who has pumped millions of pounds into the EDL, has until now, kept a low profile, leaving his footsoldiers to do the talking with "well directed boots and fists" under the authority of his "generals" like skilled BNP organiser Chris Renton, but recently Lake has appeared more frequently on the net, especially on the far right lslamophobic website "4Freedoms", allowing his cover to be blown as he becomes more cocksure, and just like his idol, late old Adolf, allows his ego to take control.

A few days ago, Lake had his Mein Kampf moment, and shot his Auschwitz load by publishing his chilling EDL blueprint of the persecution of Muslim people, letting loose on who he wants to be forced into assigned apartheid Nazi-style ghettos where they would suffer persecution, poverty, starvation, and more importantly, would be killed if they chose to leave, and tried to move out into non-Muslim areas.

(see the screenshot above for his anti-Muslim Holocaust blueprint)

Lake is an incredibly wealthy racist who owns several successful businesses, and is behind the scenes bankrolling the EDL to help make Britain the racist country, it truly isn't. The vast majority of white and Asian people just want to live their lives in harmony, but as the EDL grows in strength and numbers, boosted by a renaissance in football hooliganism, it is important that their gullable working class hooligan footsoildiers are reminded of the pure evil that keeps this shadowy organistion on the road.

While Nick Griffin is an in competant, a loser, and (according to his own members) a thief, who has embezzled his own members to feather his own nest, Alan Lake is a wel-connected, dedicated, upper-middle class philosophical racist who believes (just like his idol Adolf Hitler) that working class alcoholics and small-town football thugs can carry out his dirty work while he pulls the strings, and watches Briton turn against Briton over religion and race.

He is using people, and the whole country needs to be made aware of who Alan Lake is, and what his plans for Britain are, should the EDL ever become a serious political force, to fill the void left by the diappearance of the BNP. Causing "the mother of all race riots", as some people have described Bradford, would feasibly be followed by the EDL's move into politics. Re: History - Adolf Hitler only become a political force, after he gained popularity for his attemped coup which failed before he took to the ballow box.

Amongst the list of famous politicians Lake longs to send to his "EDL Concentration Camps", he has named the Archbishop Of Canterbury, Nick Clegg and David Cameron, and the list wouldn't end there, as it's not just religious leaders and politicians who Lake calls "traitors". He also would send milions of ordinary people like me who dare to challenge prejudice to their persecution and deaths, if one day, he were to take control of this country by any means.

Anybody who escaped confinement in the Muslim Ghetos would be executed, according to the sickening fantasies of Lake.

Not only does Silent Fuhrer Lake want Muslims to be ghettoised and die, if Lake was ever to become in-charge of Britain (or a seperate England), he would instigate the persecution and murder of all liberal-minded people, socialists, anarchists, and anybody who dared to speak out against the persecution of Muslim men, women and children.

To paraphrase the words of Paster Neimoller, first they would come for the Muslims, then the political leaders of all parties, then human rights laywers and activists, and lastly, working class people who befriended Muslim families.

It was hoped Nazi-ism would be gone by the end of the last Millenium, but as capitalism has collapsed, and wars have been waged against Islamic nations in the name of oil, Muslims have become the new Jews. If the EDL are not crushed, our worst nightmares might one day come true.

Jewish ghettos were formed after Krystallnacht, and in the same way, the EDL's planned large-scale violent incursions into Bradford and Tower Hamlets after relatively-peaceful demos in places like Newcastle, are the beginning of the onset of Alan Lake's very own "Final Solution".

If you know impressionable people who have been persuaded to become involved with the EDL, but are unaware of the hardcore nazism that underpins the financial influence of Alan Lake, please let them know about Lake's chillling intent.

People of conscience didn't act against Adolf Hitler until it was too late!

The working class hooligans are being used by this scumbag as pawns to carry out his fuckin' neonazi masterplan.

Sadly few EDL people who turn up at their far right rallies know the score.

All of the anti-union stuff shows that it's the good old-fashioned "backs against the wall" once we take power mentality of Combati8.

If that ain't neonazi I'm a muthfuckin' kangeroo!

Is there any way we can get through to the EDL rank and file about how they will use Bradford as the EDL's Krystallnacht?

is this for real

find it hard to believe he wrote this have we any proof? if so publish it this would cause lots of the rank and file to leave the edl but without proof it means nothing and will just strengthen the resolve of the edl to what they will see as more leftist bullshit

I've found it by matter of chance!

It's this thread, I believe: -

Beware: It's not palatable reading.

It's For Real! Sickening!

It's Alan Lake all right. I've just screensaved a copy so it can't be denied, and have emailed it to various friends. Even sent one to Hope Not Hate!

I don't think Lake gives a fuck what anybody thinks! He's rich, well connected, and likes to do as he fuckin' well pleases!

Alan lake is a nasty right winger, but afaics a libertarian right winger not a neo nazi. These people's opposition to Islam is that they see it as totalitarian and repressive, not the position of a state obsessed Nazi. Lake is laughing at the Left as he sees them as totalitarian fascists and so the same as how he sees Islam.

What is estremely dangerous about this drivel is that it justifies attacks on all muslims with its deluded idea that extreme fundamentalism islamism will take over the british muslim communities, and you get the strong feeling Lake woudl be happy to have all muslims driven out.

If he and the EDL were that concerned about jihadism they would work with those who support progressives in these communities, but their 'catch all' smears actually push moderate muslim youth toward the jihadis. a dangerous fool but no nazi and one who needs a talking to

watch both these vids

http://www.youtube.com/watch?v=Ffo4oF2Hp_A
Lake starts at 6.22 ( the previous speaker was Guramit Singh, and the person holding the megaphone is 'Charlie Feathers' from the band the Fighting Cocks and libertarian group Cheerleaders against Islamic Extremism )

@ anybody and anybody else from the EDL who is reading ..

you people need to wise up. there are a lot of dangerous and nasty scum involved with the EDL like Alan Lake who do not give a fuck about the ordinary people who have been drawn to the EDL to express their anger about what they see as their country being fucked up. these rich millionaires only care about freedom to make money out of ordinary working class people. It time to give them the boot. IF you really want your country back, you need to understand it is not owned by the muslims. It is owned by thousends of ultra rich english (yes english) businessmen. look at the cabinet, all those millionaires. THAT is who who runs this country NOT the muslims. We will gladly join with you singing " we want our country back" when you start directing it to the right people.

"Lake would be happy to have all muslims driven out".

Lake would also send all liberals, leftwingers and anarchists, and anybody who spoke out against racism in front of the firing squad.

Believe me, this is not mere idle chatter. He's the sort of evil bastard who really would do it.

Money, hatred, arrogance, and loathing of anybody who dares to oppose his bourgeous fascism.

The Swedish Democrats who lake also funds, are just like the BNP, and are in-fact friends of Nick Griffin.