The April/may issue of the Fargate Speaker has hit the streets, download and print off the PDF version and pass it around, and read on for the content which includes, A Load of Old Ballots!, Dinner Ladies Ask For More, Save Our Sam, Anti-Racist Hero: Mark Collett, Lib Dems Save The World: A Regular Look at Sheffield's "Favourite" Political Party and Fargate Calling: A Look at Sheffield's Radical History. 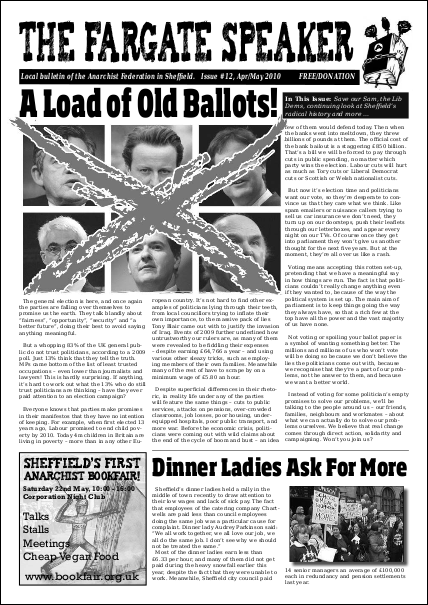 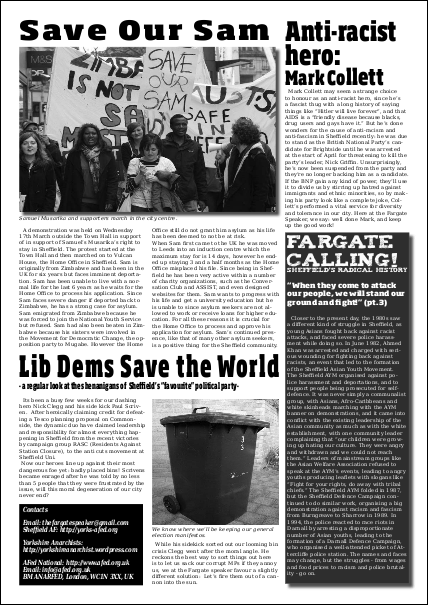 A load of Old Ballots!

The general election is here, and once again the parties are falling over themselves to promise us the earth. They talk blandly about “fairness”, “opportunity”, “security” and “a better future”, doing their best to avoid saying anything meaningful.

But a whopping 83% of the UK general public do not trust politicians, according to a 2009 poll. Just 13% think that they tell the truth. MPs came bottom of the list of least trusted occupations – even lower than journalists and lawyers! This is hardly surprising. If anything, it’s hard to work out what the 13% who do still trust politicians are thinking – have they ever paid attention to an election campaign?

Everyone knows that parties make promises in their manifestos that they have no intention of keeping. For example, when first elected 13 years ago, Labour promised to end child poverty by 2010. Today 4m children in Britain are living in poverty – more than in any other European country. It’s not hard to find other examples of politicians lying through their teeth, from local councillors trying to inflate their own importance, to the massive pack of lies Tony Blair came out with to justify the invasion of Iraq. Events of 2009 further underlined how untrustworthy our rulers are, as many of them were revealed to be fiddling their expenses – despite earning £64,766 a year – and using various other sleazy tricks, such as employing members of their own families. Meanwhile many of the rest of have to scrape by on a minimum wage of £5.80 an hour.

Despite superficial differences in their rhetoric, in reality life under any of the parties will feature the same things – cuts to public services, attacks on pensions, over-crowded classrooms, job losses, poor housing, under-equipped hospitals, poor public transport, and more war. Before the economic crisis, politicians were coming out with wild claims about the end of the cycle of boom and bust – an idea few of them would defend today. Then when the banks went into meltdown, they threw billions of pounds at them. The official cost of the bank bailout is a staggering £850 billion. That’s a bill we will be forced to pay through cuts in public spending, no matter which party wins the election. Labour cuts will hurt as much as Tory cuts or Liberal Democrat cuts or Scottish or Welsh nationalist cuts.

But now it’s election time and politicians want our vote, so they’re desperate to convince us that they care what we think. Like spam emailers or nuisance callers trying to sell us car insurance we don’t need, they turn up on our doorsteps, push their leaflets through our letterboxes, and appear every night on our TVs. Of course once they get into parliament they won’t give us another thought for the next five years. But at the moment, they’re all over us like a rash.

Voting means accepting this rotten set-up, pretending that we have a meaningful say in how things are run. The fact is that politicians couldn’t really change anything even if they wanted to, because of the way the political system is set up. The main aim of parliament is to keep things going the way they always have, so that a rich few at the top have all the power and the vast majority of us have none.

Not voting or spoiling your ballot paper is a symbol of wanting something better. The millions and millions of us who won’t vote will be doing so because we don’t believe the lies the politicians come out with, because we recognise that they’re a part of our problems, not the answer to them, and because we want a better world.

Instead of voting for some politician’s empty promises to solve our problems, we’ll be talking to the people around us – our friends, families, neighbours and workmates – about what we can actually do to solve our problems ourselves. We believe that real change comes through direct action, solidarity and campaigning. Won’t you join us?

Sheffield’s dinner ladies held a rally in the middle of town recently to draw attention to their low wages and lack of sick pay. The fact that employees of the catering company Chartwells are paid less than council employees doing the same job was a particular cause for complaint. Dinner lady Audrey Parkinson said: “We all work together, we all love our job, we all do the same job. I don’t see why we should not be treated the same.”

Most of the dinner ladies earn less than £6.33 per hour, and many of them did not get paid during the heavy snowfall earlier this year, despite the fact that they were unable to work. Meanwhile, Sheffield city council paid 14 senior managers an average of £100,000 each in redundancy and pension settlements last year.

A demonstration was held on Wednesday 17th March outside the Town Hall in support of in support of Samuel’s Musarika’s right to stay in Sheffield. The protest started at the Town Hall and then marched on to Vulcan House, the Home Office in Sheffield. Sam is originally from Zimbabwe and has been in the UK for six years but faces imminent deportation. Sam has been unable to live with a normal life for the last 6 years as he waits for the Home Office to process his application. Since Sam faces severe danger if deported back to Zimbabwe, he has a strong case for asylum. Sam emigrated from Zimbabwe because he was forced to join the National Youth Service but refused. Sam had also been beaten in Zimbabwe because his sisters were involved in the Movement for Democratic Change, the opposition party to Mugabe. However the Home Office still do not grant him asylum as his life has been deemed to not be at risk.

When Sam first came to the UK he was moved to Leeds into an induction centre which the maximum stay for is 14 days, however he ended up staying 3 and a half months as the Home Office misplaced his file. Since being in Sheffield he has been very active within a number of charity organizations, such as the Conversation Club and ASSIST, and even designed websites for them. Sam wants to progress with his life and get a university education but he is unable to since asylum seekers are not allowed to work or receive loans for higher education. For all these reasons it is crucial for the Home Office to process and approve his application for asylum. Sam’s continued presence, like that of many other asylum seekers, is a positive thing for the Sheffield community.

Mark Collett may seem a strange choice to honour as an anti-racist hero, since he’s a fascist thug with a long history of saying things like “Hitler will live forever”, and that AIDS is a “friendly disease because blacks, drug users and gays have it.” But he’s done wonders for the cause of anti-racism and anti-fascism in Sheffield recently: he was due to stand as the British National Party’s candidate for Brightside until he was arrested at the start of April for threatening to kill the party’s leader, Nick Griffin. Unsurprisingly, he’s now been suspended from the party and they’re no longer backing him as a candidate. If the BNP gain any kind of power, they’ll use it to divide us by stirring up hatred against immigrants and ethnic minorities, so by making his party look like a complete joke, Collett’s performed a vital service for diversity and tolerance in our city. Here at the Fargate Speaker, we say: well done Mark, and keep up the good work!

Lib Dems Save the World: A Regular Look at Sheffield's "Favourite" Political Party

Hero Nick Clegg and his side kick Paul Scriven. After heroically claiming credit for defeating a Tesco planning proposal on Commonside, the dynamic duo have claimed leadership and responsibility for almost everything happening in Sheffield from the recent victories by campaign group RASC (Residents Against Station Closure), to the anti cuts movement at Sheffield Uni.

Now our heroes line up against their most dangerous foe yet: badly placed bins!?Scrivens became enraged after he was told by no less than 5 people that they were frustrated by the issue, will this moral degeneration of our city never end?

While his sidekick sorted out our looming bin crisis Clegg went after the moral angle. He reckons the best way to sort things out here is to let us sack our corrupt MPs if they annoy us, we at the Fargate speaker favour a slightly different solution: Let’s fire them out of a cannon into the sun.

“When they come to attack our people, we will stand our ground and fight!” (pt. 3)

Closer to the present day, the 1980s saw a different kind of struggle in Sheffield, as young Asians fought back against racist attacks, and faced severe police harassment while doing so. In June 1982, Ahmed Khan was arrested and charged with serious wounding for fighting back against racists, an event that led to the formation of the Sheffield Asian Youth Movement. The Sheffield AYM organised against police harassment and deportations, and to support people being prosecuted for self-defence. It was never simply a communalist group, with Asians, Afro-Caribbeans and white skinheads marching with the AYM banner on demonstrations, and it came into conflict with the existing leadership of the Asian community as much as with the white establishment, with one community leader complaining that “our children were growing up hating our culture. They were angry and withdrawn and we could not reach them.” Leaders of mainstream groups like the Asian Welfare Association refused to speak at the AYM’s events, leading to angry youths producing leaflets with slogans like “Fight for your rights, do away with tribal chiefs.” The Sheffield AYM folded in 1987, but the Sheffield Defence Campaign continued to do similar work, organising a big demonstration against racism and fascism from Burngreave to Sharrow in 1989. In 1994, the police reacted to race riots in Darnall by arresting a disproportionate number of Asian youths, leading to the formation of a Darnall Defence Campaign, who organised a well-attended picket of Attercliffe police station. The names and faces may change, but the struggles - from wages and food prices to racism and police brutality - go on.