Audio: Ideas Around Hacking / How Does Openness Work?

Attached are recordings of two discussions, Ideas Around Hacking and How Does Openness Work? which were held at Access Space 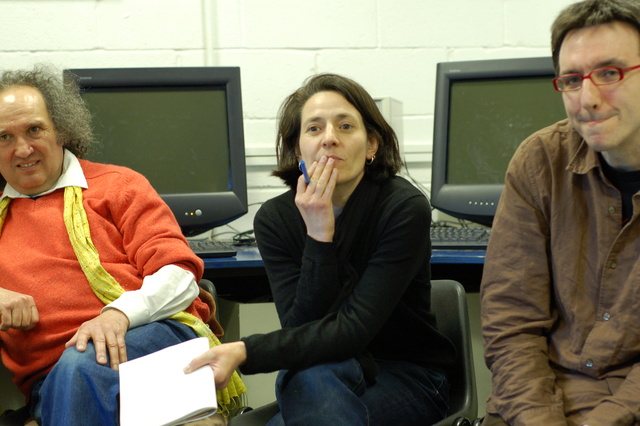 Following is the text used to advertise the talks:

*Ideas Around Hacking
*How Does Openness Work?

Ideas Around Hacking: A conversation around ideas of openness and collaboration in society and the "public sphere" with net theorists Patrice Reimens and Toni Prug (author of forthcoming book, Hacking The State).

How Does Openness Work?

Can ideas of openness from the realm of Free and Open Source Software apply to wider society, artistic practise, architecture and organisations?

Lisa Haskel works as a programmer, systems administrator and teacher with open source softwares and platforms for internet-based communications. She has been observing and writing about old and new technologies for more than 20 years, always most interested in possibilities for access and participation.

Patrice Riemens (1950) is a Social Geographer, advocate of Free and/or Open Source Software and member of the Dutch Hackers Group Hippies from Hell.He is also a translator of the contemporary French philospher Paul Virilio.

Dominic Smith is the co-founder of

http://ptechnic.org/ and is an artist, hacker and musician. Dominic develops and manages the open source media lab, events, residencies and training programmes which have included Channel 4's Sound Circuit workshop, Newcastle 2004; partners with Access space and Folly in Grow Your Own Media Lab, a national programme of ‘ground-up’ computing and the Open Mute tour, 2005. Dominic's art practice extends to music, sound, installation and live performance which include works and performances at; The ICA, London, 2004; The CCA, Glasgow, 2004; Feed Festival, Birmingham, 2004, presented at EyeBeam in New York, 2008 and in 2009 completed a residency at SCANZ in New Plymouth - New zealand. Currently Dominic is a researcher with CRUMB at Sunderland University, studying towards PhD.

Toni Prug is a PhD student at the School of Business and Management at Queen Mary College, University of London. With ten years of software and network engineering and hacking behind him, he is working on organizational forms, hacking existing practices, ideologies and state-forms. Along with working with academic journals on implementing aspects of open process cooperation, he is the author of a forthcoming book, Hacking The State.

Sam Vardy is a PhD student at the School of Architecture at the University of Sheffield. His research and practice explores alternate ways to operate as an architect, and focuses on the notions of self-organisation and the collective appropriation of space.

James Wallbank is an artist, educator and free software advocate. He first conceived Access Space in 1998, following huge success in recycling redundant computers for artistic projects. The arts group he'd founded, Redundant Technology Initiative, was so overwhelmed with the potential of the hundreds of computers they'd recovered, he realised that the public would have to get more involved. In 2000 RTI opened Access Space, which poses the question “How can you get creative with all this technology?” He's a frequent presenter at Media Arts Festivals and ICT Conferences, delivers FLOSS Training for Business, and does occasional lecturing at Universities & Colleges.

4th Oekonux Conference: Free Software and Beyond - The World of Peer Production