The March of Hell. Our Japanese Cousins are some of the most oppressed activists

This network of activists are constantly harrassed more so than our country by ultra-nationalists and police alike. Since I've been here and there is little connections at all between them and Europe. The 15th of August, where 14 war criminals are commemorated alongside the dead. I'll describe what is apparently the most hardcore protest of the year for the left as there's no news anywhere. Kyoto university just had an occupation. Apparently that is not unusual. Why isn't it somewhere? There is a sort of mini Burning Man festival in the countryside next week. A 2 day Anti-Nike event after. They have a 'drifter's` union of young people who drift from cornershop and restaurant shops with no sicial mobility. Nothing like that gets through. Please look at the videos of youtube at the end and read the Japan Times article on the 15th of August demonstration. 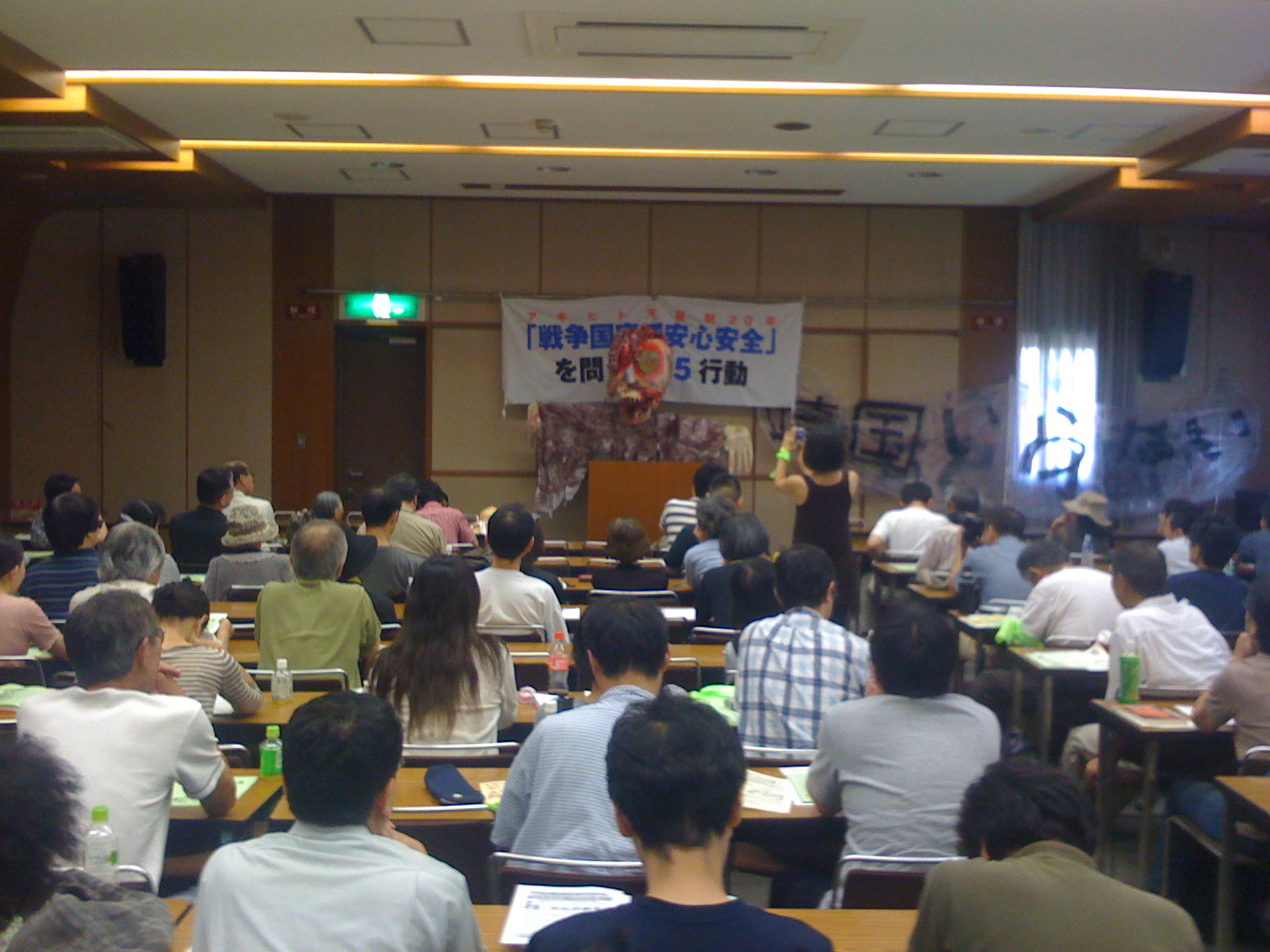 Photo of a speech using a giant puppet which was also used to protest with. 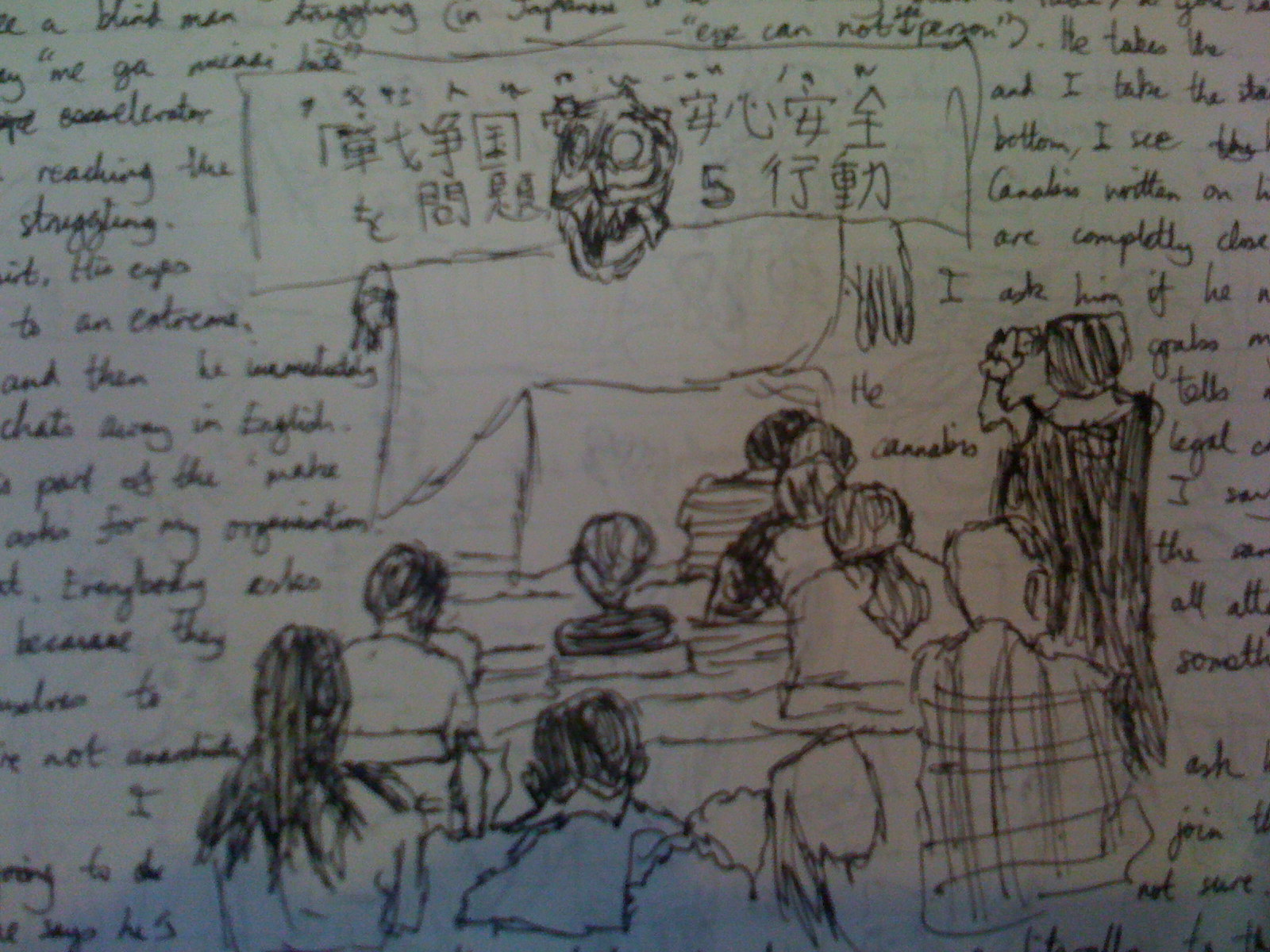 My drawing of the puppet 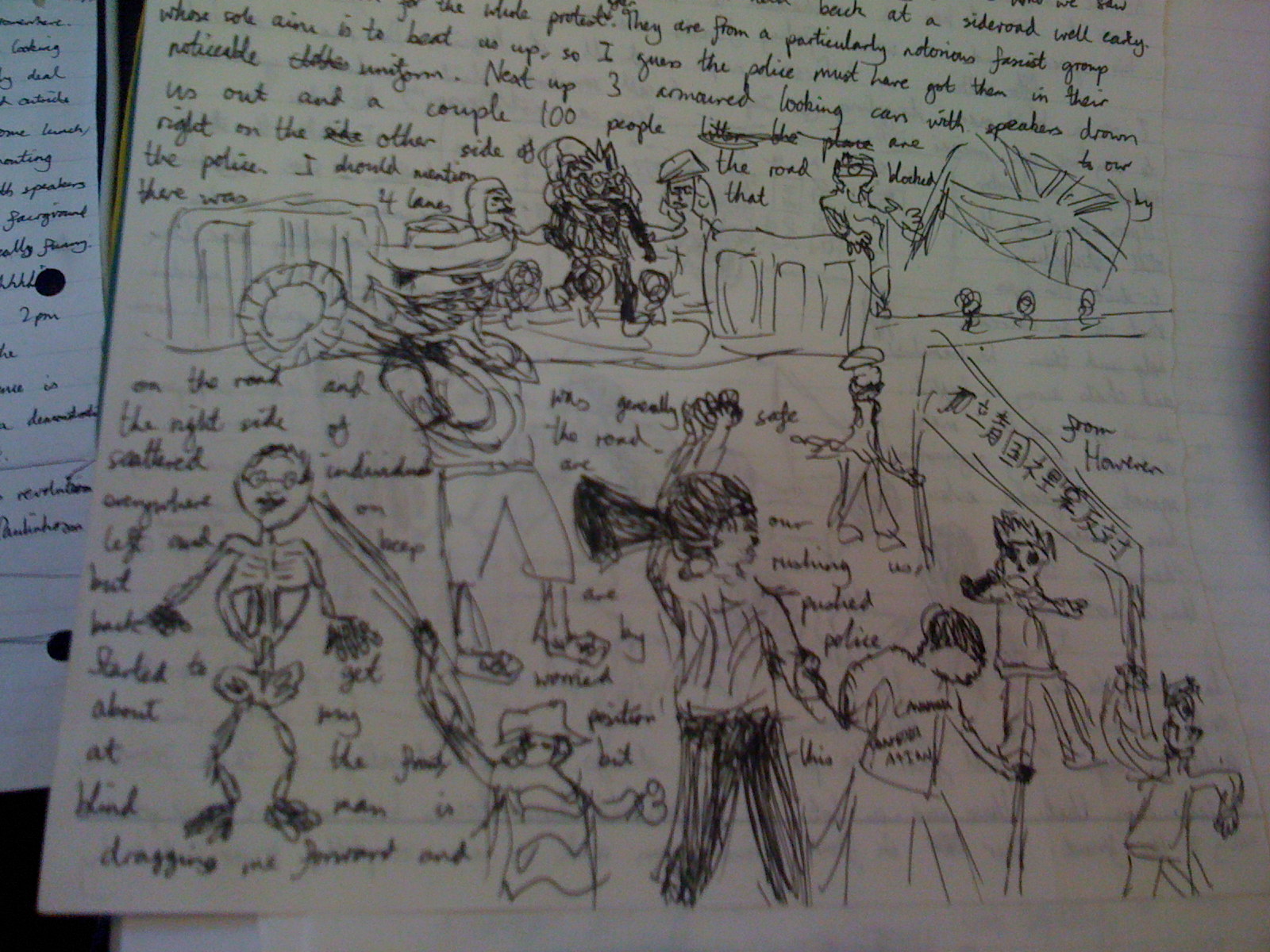 I can not show photos, so I show my drawing of our protest 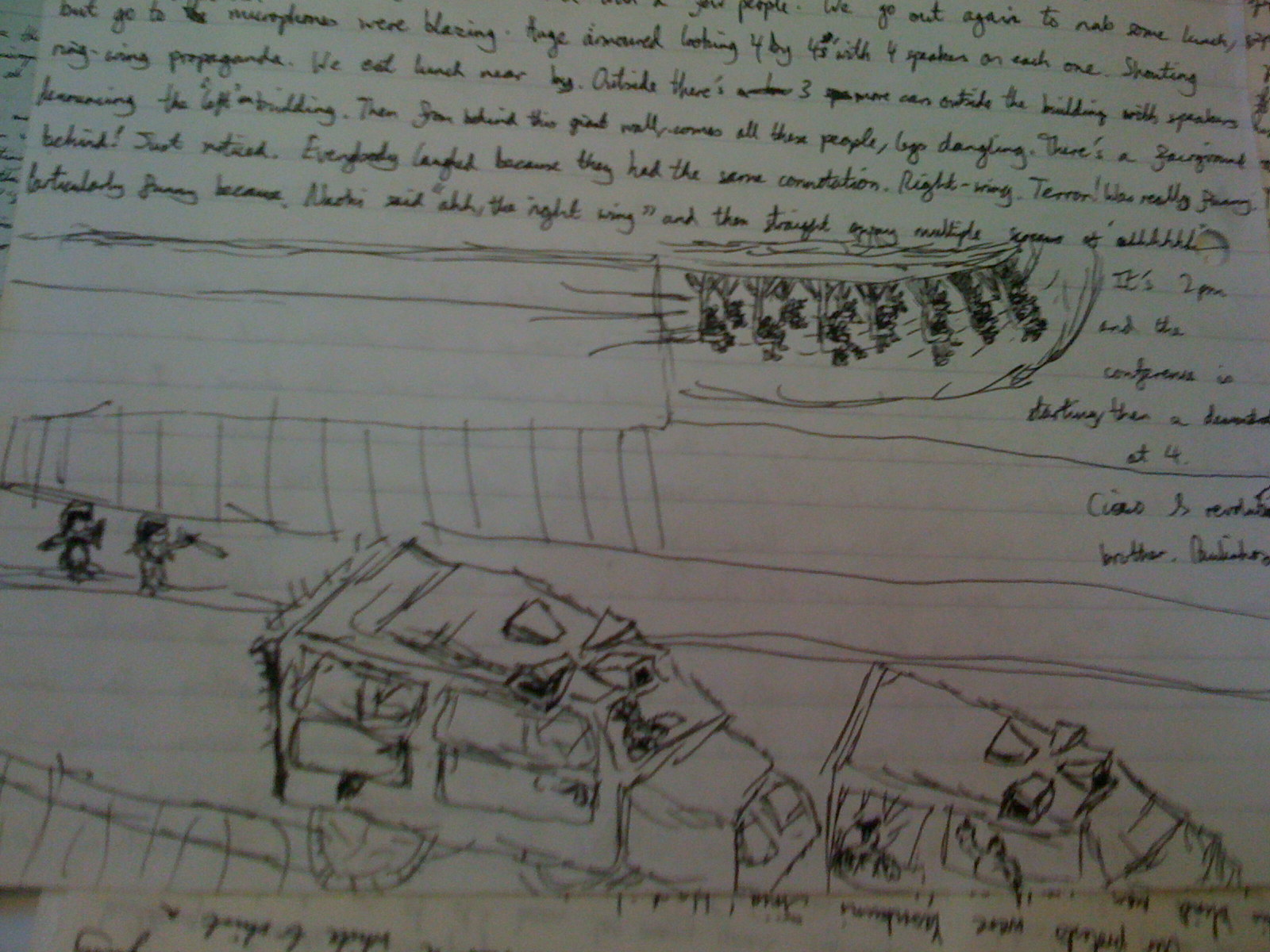 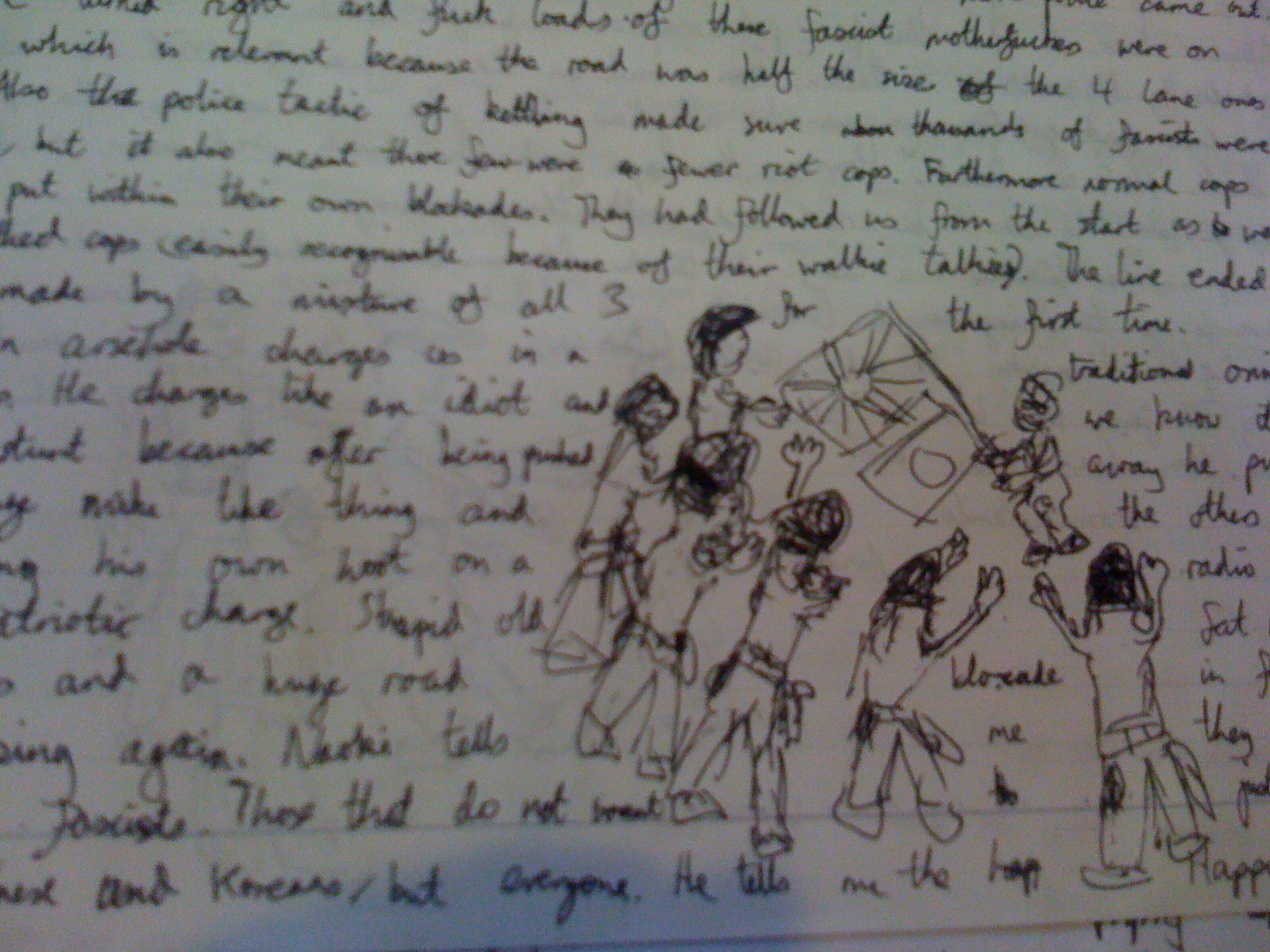 A good article that explains what happen-ish

http://www.youtube.com/watch?v=s7fAjHMZiiY - This is the closest we have to our one of our videos on the web. It is a shortened video of the whole thing with faces blurred to protect us.

http://www.youtube.com/watch?v=1Dm1ME8Zxnk&feature=related - The beginning of the end and the horror truly begins. Turning the corner into a hoard of ultra-nationalists on the other side of the road from this camera.

http://www.youtube.com/watch?v=qhEvZLJ3U3Y - at 5.42, me and the blind man on the left walking slowly. The right wing made this video

http://www.youtube.com/watch?v=0S_rkPIz29A&feature=related. This right-wing guy has 9 videos recording the event. This is video number 4

http://www.youtube.com/watch?v=oLVmHg13QjI - protest earlier I was not at because was taking part in the action. More left-wing video perhaps.

http://www.youtube.com/watch?v=Vv888NYzvrs - another video from an earlier protest in the day. Violence again and again.

http://www.youtube.com/watch?v=2yr7sdDZSDI - another video from the earlier protest