Q&A : Water Pushed to the Limit

SANTIAGO, Jan 30 (Tierramérica) - When it comes to water, "humanity does not have the full awareness of the danger it is facing and will only act under extreme circumstances. The bad news is that those extremes are drawing near," Manuel Baquedano, president of the Chilean non-governmental Institute of Political Ecology, told Tierramérica. * 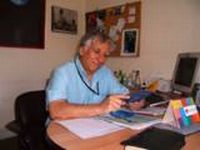 Baquedano will head one of the panels at the "Peace with Water" conference, to take place Feb. 12-13 at the headquarters of the European Parliament in Brussels, organised by the World Policy Form, presided by former Soviet leader Mikhail Gorbachev (1985-1991).

At the conference, delegates will discuss the draft of the World Water Protocol, which they want included in the international negotiations of the treaty that is to replace the 1997 Kyoto Protocol on climate change in 2013.

Tierramérica spoke with the Chilean environmentalist, 59, who is also a sociologist (graduate of the Belgian Catholic University of Leuven) and author of the book "Tu huella ecológica" ("Your Ecological Footprint", 2008).

TIERRAMÉRICA: How did the proposal for the World Water Protocol come about?

MANUEL BAQUEDANO: It has had a long maturation period, given that it has included all the demands in relation to water coming from global forums and from the World Water Assembly (for Citizens and Elected People, of the Euro-Parliament).

That translated into a diagnostic of the global water situation and the need to regulate this scarce resource, which should belong to all humanity, but which in some countries, like Chile, has been privatised.

Humanity can live without petroleum, but not without water. The whole world talks about the climate crisis and the energy problems. The second vital component of this trilogy is going to be water.

TIERRAMÉRICA: Can you give us a preview of the draft of the Protocol that will be debated in Brussels?

MB: The objective of this Protocol is to create a pre-negotiation amongst states. It is a long process. I personally, not in the name of the organisations, calculate that it will take 12 to 15 years for all states to accept it. As such, the objective is that it be written into the negotiation agenda in the 2010-2012 period, with sights on a 2013 post-Kyoto agreement. We are seeking a public, inter-governmental pact on water.

TIERRAMÉRICA: In your opinion, what will be the most critical elements of the Protocol?

MB: First, to declare water as a universal public good. Second, to create a global regulatory authority. That the states assume control over water.

TIERRAMÉRICA: How will corporate interests be restricted?

MB: We are proposing a global water authority, which would be coordinated with the United Nations and which should oversee the normative and judicial aspects, in terms of conflict resolution and sanctions. We want to subordinate private interests to public interests in the use of water.

In that framework, we don't have a problem with granting concessions (to private entities) for its use and treatment, but we don't approve of granting sovereignty or property over water, because it should be a public good in the service of humanity. We are seeking to impose limits on the use of water as a commodity.

TIERRAMÉRICA: What kind of reception are you expecting at the December conference in Copenhagen, where negotiations on the post-Kyoto treaty will continue?

MB: I've already had a meeting with Ricardo Lagos (former president of Chile, 2000-2006, and one of the three special envoys for climate change named by UN Secretary-General Ban Ki-moon).

I informed him about this initiative and he was willing to accept the conclusions and to arrange an interview with Gorbachev to see how we can introduce the issues concerning water in the post-Kyoto agreement. The links have already been established.

TIERRAMÉRICA: What differences are there between this Water Protocol and previous initiatives?

MB: One of the most important things is that the document is going to facilitate a pre-negotiation amongst countries. In this first conference (in Brussels) we are bringing together an enormous number of people, very well respected in all fields: political, scientific and social.

This document, with that legitimatisation, is going to serve as the basis for a second round of negotiations amongst states. And when we reach critical mass we are going to take the negotiations to the UN.

Now, why special status for water? Because it is a vital element and if its usage isn't regulated it will be the source of large conflicts. If today there are wars over petroleum, in the future they will be over water.

If we have a culture of peace and we want to get ahead of the major conflicts that humanity will face, we have to let the process of regulating water use continue to advance.

TIERRAMÉRICA: Latin America is a strategic region when it comes to freshwater reserves. How would you rate the protection of this resource?

MB: Yes, it is a strategic region because it has aquifers, very big rivers, like the Paraná and the Amazon, and glaciers. It is a region abundant in water, which is under threat.

I see governments concerned with handing over water access to the population. What I don't see is a more equitable distribution of water use and protection, direct or indirect. For example, melting glaciers is a global phenomenon, but in Chile and the Andean countries they are not yet confronting the gravity of the situation.

I don't see policies for conservation, for prevention, for storing water in the sense of creating new infrastructure that allows better use practices. If we continue this way, millions of human beings will be left without this life-sustaining resource.