IMEMC Special: White Phosphorus and its use in Gaza

White Phosphorus (P4) is a waxy fat soluble colorless or slightly yellow solid with a garlic smell that is not naturally occurring but is produced in the laboratory. It is highly reactive with oxygen (ignites spontaneously upon drying and exposure to air) producing compounds like P4O6 (phosphorus pentoxide) and P4O10 which upon contact with water becomes oxophosphoric acids (aslternatively direct reaction with water can lead to phosphoric acid HPO4 through some intermediate compounds) 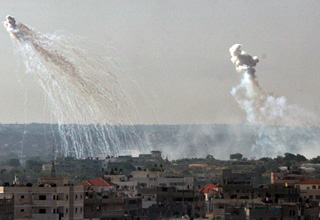 Press TV Images of WP use in Gaza

These properties have give it both civilian and military uses. Its civilian uses include production of phosphoric acid and phosphate based fertilizers. It is used by the military because it interacts with oxygen producing fire and smoke and can act both as a smokescreen, marking enemy areas and also to terrorize enemy combatants to leave fox holes and tunnels into more open areas where standard ammunition can be used on them. White phosphorous is a member of a class of incendiary weapons that includes such things as napalm and thermites but also functions in producing smoke to confuse and destroy the ability of enemy troops to function. When used as an incendiary weapon it works directly against personnel producing severe physical and psychological impacts and also destroys equipment of targeted troops.

Military use and use in Iraq: According to GlobalSecurity.org (a national security information outlet in the US): “White Phosphorus (WP), known as Willy Pete, is used for signaling, screening, and incendiary purposes. White Phosphorus can be used to destroy the enemy's equipment or to limit his vision. It is used against vehicles, petroleum, oils and lubricants (POL) and ammunition storage areas, and enemy observers. WP can be used as an aid in target location and navigation. It is usually dispersed by explosive munitions. It can be fired with fuze time to obtain an airburst. White phosphorus was used most often during World War II in military formulations for smoke screens, marker shells, incendiaries, hand grenades, smoke markers, colored flares, and tracer bullets.” (

The US used WP in its wars from Vietnam to Iraq and has defended such use as legitimate. Initially the US forces claimed that they used WP just 'to illuminate enemy positions at night, not [directed] at enemy fighters' but and sent mixed signals about whether it considers it an incendiary devise or not and whether insurgents are targeted by the devise or it is merely used as a spectacular light and smoke devise (

WP was used to 'flush' insurgents out to kill them using other munitions: 'WP proved to be an effective and versatile munition. We used it for screening missions at two breeches and, later in the fight, as a potent psychological weapon against the insurgents in trench lines and spider holes when we could not get effects on them with HE (High Explosive) Rounds. We fired ‘shake and bake’ missions at the insurgents, using WP to flush them out and HE to take them out.' (TF 2-2 IN FSE AAR: Indirect Fires in the Battle of Fallujah, By Captain James T. Cobb, First Lieutenant Christopher A. LaCour and Sergeant First Class William H. Hight, Field Artillery, March-April 2005, pp. 23-28). While initially denying use of it as an incendiary device against targetted personnel, the US Pentagon spokesman later admitted to the BBC such use in Fallujah (

The same spokesperson explained that 'One technique is to fire a white phosphorus round into the position because the combined effects of the fire and smoke—and in some case the terror brought about by the explosion on the ground—will drive them out of the holes so that you can kill them with high explosives.' (

WP use is legal for purposes such as illumination and obscuring smoke, and the Chemical Weapons Convention does not list WP in its schedules of chemical weapons. Witnesses and analysis of the battlefield in Falluja revealed to Italian filmmakers significant effects on the civilian population. (see documentary

At one point WP was used in rat poison and in fireworks but modern products do not have it because of potential health hazards. The US Center for Disease Control states that it is reported to cause death an injury when inhaled, ingested, or had contact with the skin (whether after burns or without burning)

http://www.atsdr.cdc.gov/toxprofiles/tp103-c2.pdf The US Environmental Protection Agency (EPA) listed white phosphorus as a “Hazardous Air Pollutant” and requires spills of 1 pound or more to be reported to the EPA (Center for Disease Control report

The acute effects of single exposures to white phosphorus smoke in rats and guinea pigs. Report No. ARCSL-TR-80013, AD-B051836L; White SA, Armstrong GC. 1935. White phosphorus smoke: Its irritating concentration for man and its toxicity for small animals for one-hour exposures. E.A.T.P. 190, Project A 5.2-l.). These authors documented congestion, edema, and hemorrhages in the lungs of effected animals.

WP substance is now known to cause what is known as phossy jaws (a degenerative condition affecting the soft tissue, bones, and teeth of the oral cavity) which has resulted in deaths due to secondary septicemias (Ward EF. 1928. Phosphorus necrosis in the manufacture of fireworks. Journal of Industrial Hygiene and Toxicology 10:314-330.). There are scattered studies on effects of WP and WP Smoke on renal, circulatory, hepatic, and musculoskeletal systems (see

The third health effect is in the persistence of particles of WP in the environment . These is obviously more common in combat use of large amounts in shells as compared to usual spills or pollution from industrial production WP chunks may be shielded from oxygen (hence burning) either by falling into water that has little oxygen content or simply as pieces of solids that can linger in the environment for years without reacting or as intermediary combustion products (partial combustion) especially in soils or environments with limited oxygen content. (

Reports of usage in Gaza

The Los Angeles Times reported January 12 that 20 homes burnt, one women killed and several injured from the use of WP in Gaza writing:“One landed in my kitchen and caused a fire,' said Zohair Mohammed abu Rejila, 35. 'I went to put it out, but another one landed on Mayar, my baby daughter. It was like a block of fire, a piece of plastic on fire. When I knocked it off her, it exploded and out came this heavy white smoke with a very bad smell.' (

Al-Jazeera TV reported on its use for several days between December 29-January 9 and aired footage of several civilian victims of white phosphorus bombs showing characteristic burns. One teenage girl, Jamila Al-Habash, had both of her legs amputated and an interview with Dr. Raed Al-'Areeny from Al-Shaifa Hospital explained the need for amutation because of the WP adherence to and reaction with soft tissues penetrating even to the bones.

When burning particles of WP attach quickly remove all clothing affected to prevent skin contact. Use cold water to rinse and extinguish any areas of skin or clothing effected. Rinising with sodium bicarbonate solution helps neutralize acids. Emove any visible chunks of WP using appropriate tools. Clothing or material that has WP should be discarded in water or allowed to burn in a safe location. Burns should be covered with moist saline-soaked dressing to prevent inflammation. Some recommend use of 0.5-2.0% copper sulphate pads but only for short period of time because of copper toxicity.

The use of WP against civilians was banned in the 1980 convention titled 'Convention on Prohibitions or Restrictions on the Use of Certain Conventional Weapons Which May Be Deemed to Be Excessively Injurious or to Have Indiscriminate Effects' (entered into force in December 1983 and is an annex to the Geneva Conventions 1949). Israel signed the convention 22 March 1995 but stated its exclusion of a number of provisions of the main treaty and has not signed the relevant protocol III dealing with incendiary weapons such as WP. The most notable exclusion of the main text was Article 7 paragraph 4 which reads:

(a) Where the High Contracting Party is also a party to Additional Protocol 1 and an authority referred to in Article 96, paragraph 3, of that Protocol has under-taken to apply the Geneva Conventions and Additional Protocol 1 in accord-ance with Article 96, paragraph 3, of the said Protocol, and undertakes to apply this Convention and the relevant annexed Protocols in relation to that conflict; or

(b) Where the High Contracting Party is not a party to Additional Protocol 1 and an authority of the type referred to in subparagraph (a) above accepts and applies the obligations of the Geneva Conventions and of this Convention and the relevant annexed Protocols in relation to that conflict. Such an acceptance and application shall have in relation to that conflict the following effects: *

(i) The Geneva Conventions and this Convention and its relevant annexed Protocols are brought into force for the parties to the conflict with immediate effect;

(ii) The said authority assumes the same rights and obligations as those which have been assumed by a High Contracting Party to the Geneva Conven-tions, this Convention and its relevant annexed Protocols; and

(iii) The Geneva Conventions, this Convention and its relevant annexed Protocols are equally binding upon all parties to the conflict. The High Contracting Party and the authority may also agree to accept and apply the obligations of Additional Protocol 1 to the Geneva Conventions on a reciprocal basis. (Text from

Protocol III of the convention sets out prohibitions against use of incendiary weapons such as WP (Israel did not sign the protocol). Parts Protocol III relevantb to use of WP in Gaza include these: Article 1: 'Incendiary weapon' means any weapon or munition which is primarily designed to set fire to objects or to cause burn injury to persons through the action of flame, heat, or combination thereof, produced by a chemical reaction of a substance delivered on the target. ... 'Concentration of civilians' means any concentration of civilians, be it permanent or temporary, such as in inhabited parts of cities, or inhabited towns or villages, or as in camps or columns of refugees or evacuees, or groups of nomads.

Article 2. It is prohibited in all circumstances to make any military objective located within a concentration of civilians the object of attack by air-delivered incendiary weapons.' (

Dr. Mazen Qumssiya - for the Applied Research Institute of Jerusalem