The Struggle Against Sexism & Racism: an International Comparison 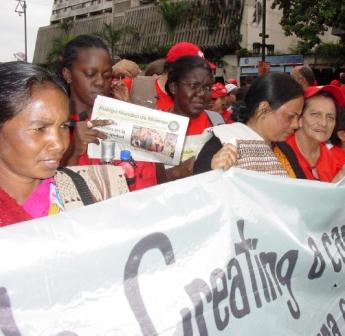 1. Grassroots Struggle Against Sexism and Racism: an International Comparison
Saturday 31 January 9.30am-5.30pm
A Black family in the White House: what power can we draw for our movement? What can we learn from our own struggle by comparing it with the struggle of others?

SPEAKERS from: AFRICA and IRAQ on war-torn families; BOLIVIA on Indigenous communities confronting the white elite; GUYANA on a people divided along race lines; INDIA on Dalit and Tribal women; HAITI on rural and sweatshop workers; PALESTINE on women’s resistance to occupation; the UK on seeking asylum and confronting racist assault; the US on immigrants’ rights, and Black communities fighting multinationals and the death penalty; VENEZUELA on defending the gains of the revolution.

2. Our Debt to Haitians – the First to Abolish Slavery
Sunday 1 February 10.30am-5.30pm
Independent since their revolution in 1804, the Black Jacobins of Haiti have blazed an anti-imperialist, anti-racist trail for us all. They have been punished for their boldness. But despite a US coup in 2004 which overthrew Haiti’s first democratically elected president Jean-Bertrand Aristide, a UN occupying army, murders and rapes, the imprisonment and disappearance of organizers like Lovinsky Pierre-Antoine, four hurricanes and near starvation, the Haitian grassroots, beginning with women, maintain their revolutionary resistance, commanding our solidarity.

SPEAKERS from: HAITI, GUYANA, VENEZUELA, EUROPE, CANADA, the US.

3. Invest In Caring, Not Killing: Valuing the Work of Caring for People and the Planet
Saturday 7 February 9.30am-5.30pm
While money is always found to wage war and bail out banks, the caring needs of people and the planet are never the priority. Women who do 2/3 of the world’s work are the poorest everywhere. Mothers who produce all the workers of the world are not considered contributors to the economy and must fight for every penny to feed families in war and so-called peace. Others are separated from their children and must fight to win them back. Domestic workers who “produce time for others” are marginalized and exploited. Rural workers who grow the food we eat are the most neglected. Men and women who refuse to kill for the military are criminalized.

4. Rediscovering Tanzania’s Ujamaa – Tribute to the Great Ntimbanjayo Millinga and the Ruvuma Development Association
Sunday 8 February 1.30-5.30pm
In the 1960s, a great anti-imperialist movement for independence swept the world. President Julius Nyerere urged Tanzanians to reject capitalist exploitation, and build a society based on African communalism. Ntimbanjayo Millinga with a few others and hardly any funding put these views into practice and built an extraordinary rural society based on equity between women and men, young and old. By 1969, 17 ujamaa villages had formed the Ruvuma Development Association (RDA). But the governing party was so hostile that, against Nyerere’s will, they closed it down. Tragically, Millinga died in 2008. RDA’s legacy is a beacon in our struggle today.

5. Rape and Prostitution – A Question of Consent
Date & Time to be confirmed
While government feminists and religious fundamentalists equate prostitution with rape and claim most sex workers have been trafficked, rapists continue to get away with it – the conviction rate for reported rape in England and Wales is a shocking 6%. But a growing international movement for women’s safety is demanding the decriminalization of sex work. In England it has defeated government attempts to “rehabilitate” sex workers and is opposing proposals to raid brothels and criminalize clients. In San Francisco 41% voted for decriminalization in the last elections.

SPEAKERS from the Safety First Coalition, Women Against Rape, the International Prostitutes Collective, and from GUYANA, INDIA, PERU, TRINIDAD & TOBAGO.