No Borders South Wales recently held a protest outside the Newport passport office to raise awareness about the fact that ID cards come into effect for non-EU students and spouses from 25th November. 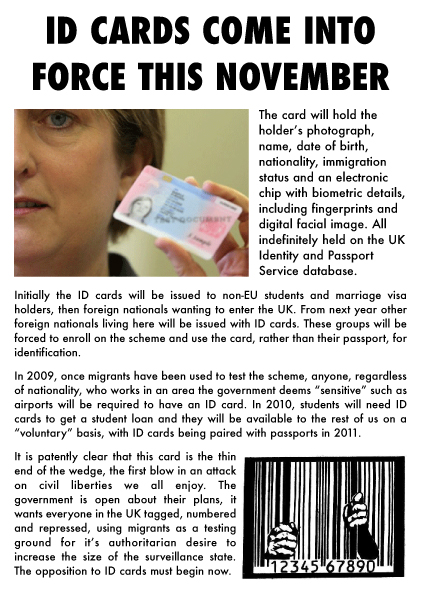 ID cards will be issued to non-EU students and spouses from regional offices in Birmingham, Cardiff, Croydon, Glasgow, Liverpool, and Sheffield from Tuesday 25th November.

No Borders South Wales will be holding a protest outside the office in Cardiff on the launch day. We call for protests outside each of the other offices on the same day.

We encourage all opponents of ID cards to join us, or plan their own protests, you can download a leaflet to photocopy and distribute here:

- 3M-SPSL who produce the biometric ID cards and passports:
"IPS is also pleased to announce that 3M-SPSL has been appointed to manufacture and supply identity cards for the roll-out to critical workers, including those employed airside at airports, starting in 2009. 3M-SPSL currently produces the biometric passport."

- CSC, EDS, Fujitsu, IBM, and Thales: contracted by the government to 'deliver the scheme':
"The five suppliers chosen to work with the Identity and Passport Service (IPS) and to deliver the National Identity Scheme (NIS) were named today [23 May 2008]. CSC, EDS, Fujitsu, IBM, and Thales have been invited to sign framework contracts and form a Strategic Supplier Group for the scheme."