Kick em off Campus is a direct action network that struggles against army recruitment and arms manufacturers on campus. 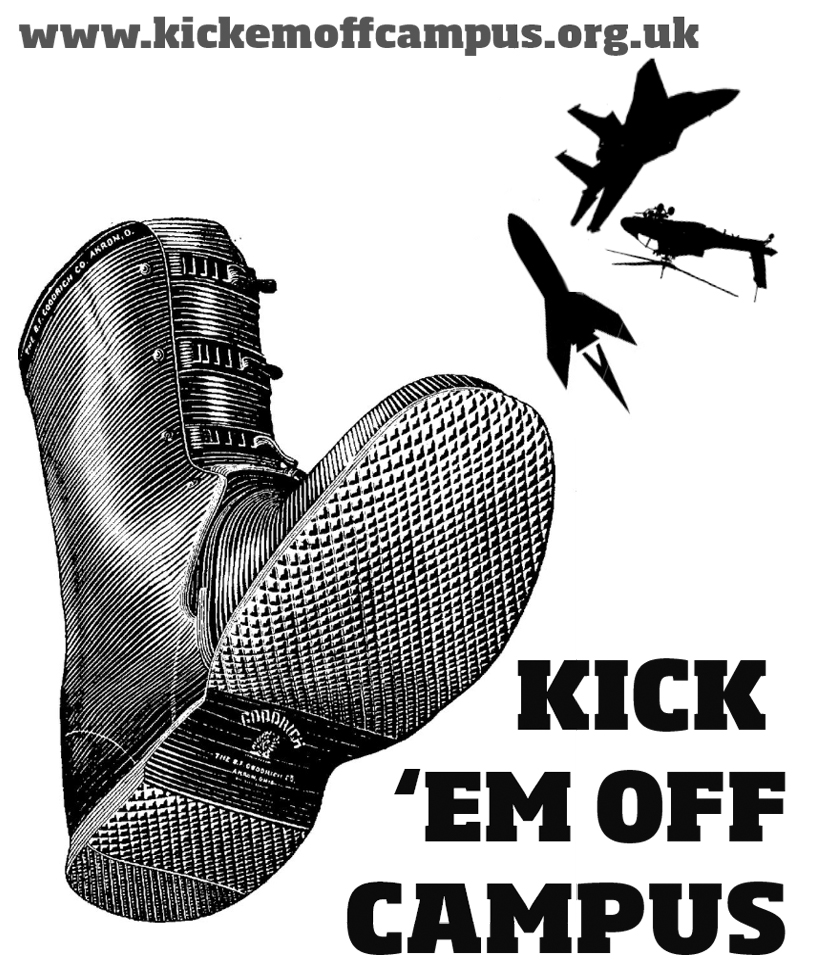 ‐ That Sheffield University currently has the 4th highest level of military investment in
the UK, with just short of £42 million provided to the university in the past decade.
Most of this funding goes through departments such as Engineering, Computer Science
and Physics with many courses allowing the military to advertise job opportunities
for their students and offering scholarships with arms manufacturers.

‐ That Sheffield University supports an OTC (Officer Training Corp) programme. A reserve regiment in the British Army whose existence allows the government to send additional troops overseas supporting the invasion of Iraq and Afghanistan.

‐ That Sheffield University’s engineering department boasts a research facility for BAE.
An arms manufacturer that not only provides fighter‐jets for the royal family of Saudi
Arabia (a dictatorship renowned for its human rights abuses), but has also made soaring
profits off the murder of millions of Iraqi civilians through its supply of weaponry
for the invasion of Iraq.


Did you also know?

‐ That on the anniversary of the invasion of Iraq a group of local activists (including
students from the university) blockaded a local army recruitment centre, disrupted its
activities for the day and successfully made Sheffield city centre a military free zone.

‐ That when Air Marshall Stuart Peach (Head of Military Defence Intelligence Services
and one of the architects of the invasion of Iraq) was invited to hold a guest lecture at
the university on the “utility of aerial warfare” he was greeted by a coalition of antimilitary
activists who set off an air siren and thirty‐five rape alarms in the hall where his speech was being held. Some rather enthusiastic participants even managed to utilise a
bit of “aerial power” of their own, lobbing active alarms at the top brass in the front row
and even one for the good Air Marshall himself.

‐ That Sheffield students have repeatedly invaded careers fairs to confront recruiters
and arms manufacturers. Resulting, on one occasion, in a quite bizarre twist of events
that ended with anti‐war activists taking over Barclay’s Bank vacant stall at the fair
(usual cost £900‐£1000) setting up their banners and handing out their anti‐military
leaflets for free! (much to the annoyance of the corporate sponsors of the event).

Come hear about our ongoing campaign to kick army recruiters and arms manufacturers out of our uni. Plus a student speaker from a successful campaign that banned military recruitment from their university campus.