When anti-war activists turned up to confront Army recruiters at a Sheffield University careers fair, we weren't sure what to expect...we definitely didn't expect to be given a Barclays Bank stall to take over and flood with anti-militarist material, but that's what we got.
Following in the footsteps of various other militant anti-war protests such as the disruption of arms dealers at a previous careers fair (

http://www.indymedia.org.uk/en/regions/sheffield/2007/11/384840.html) and the blockading of an army recruitment office on February 15th (

http://www.indymedia.org.uk/en/regions/sheffield/2008/02/391731.html), a few local activists decided to pay the Army a visit at the Sheffield University Spring into Jobs fair. We marched in, blockaded their stall with our trusty "Get your bloody hands off our students" banner, began giving out anti-recruitment leaflets, and waited for university security to throw us out...when a security guard did turn up, he was unexpectedly friendly, and in a bizarre turn of events agreed that, since Barclays Bank hadn't turned up (which should cheer up any weary activists - a small group of troublemakers managed to get our act together enough to turn up at the fair, but one of the world's biggest banks totally failed to do so), we could take over their stall. Having gone down there expecting a brief confrontation followed by a more-or-less humiliating ejection, we were instead given a space inside the careers fair to disrupt the parade of glossy corporate recruiters with our tatty homemade banners and class-based anti-militarist leaflets. This was especially handy since there's a campaign being launched to get the students' union to ban military recruitment altogether, so we were able to spend a few hours gathering signatures in support of the motion from within the belly of the careerist beast. The weirdness of the occasion crossed over into being positively dreamlike when a friendly graduate recruiter approached us, explaining that he was concerned our banners (the "...bloody hands..." one and another reading "100% need not apply") didn't make it clear enough that we were targetting the army, and gave us a plan of a power plant so we could scrawl anti-military slogans on the back.
It's worth noting how easily we managed to drive the military recruiters away - we'd been expecting some macho meatheads who'd get aggressive with us, but instead when we turned up and unfurled our banners the guy behind the stall (a Colonel, according to his nametag), just legged it and waited until we'd retreated to our stall before he got back behind his. A security guard explained that he didn't want to get into any confrontations, which seemed to raise the question of why the delicate flower had joined the sodding Army in the first place. Should also mention that as there were a few animal liberationists present, and the animal-abusing scum of Procter & Gamble had a stall at the fair, we also managed to find a bit of room for anti-P&G material. I can't find any info on how much stands at this one cost, but stalls at the next careers fair are priced at £920 (plus VAT) for a small stand and £1020 for a big one, which means that every corporate employer there would've paid around a grand for their space, while we got to stand there agitating against the military (and animal testing, and the capitalist system that drives all these horrors and many more) for free. Result!

Big Up the Red Sheffield Massive. 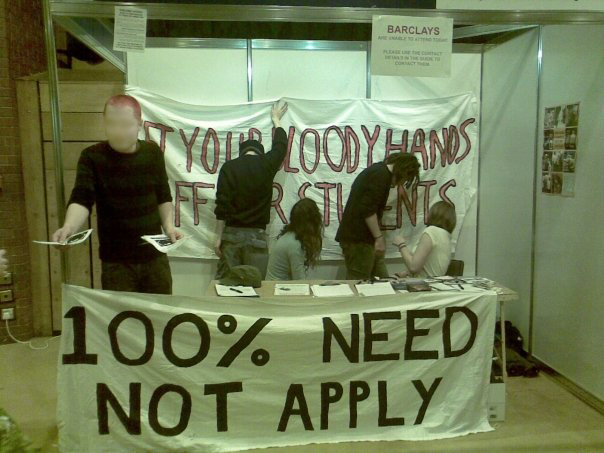 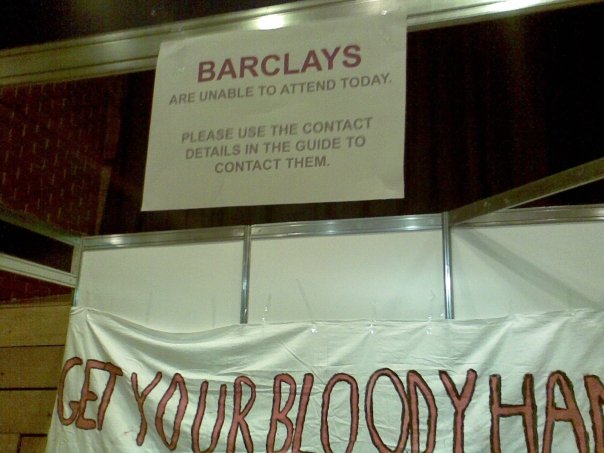 Blockading an army recruitment stall and being rewarded with a free platform to openly propagate your anti-militarist, classist ideas - priceless