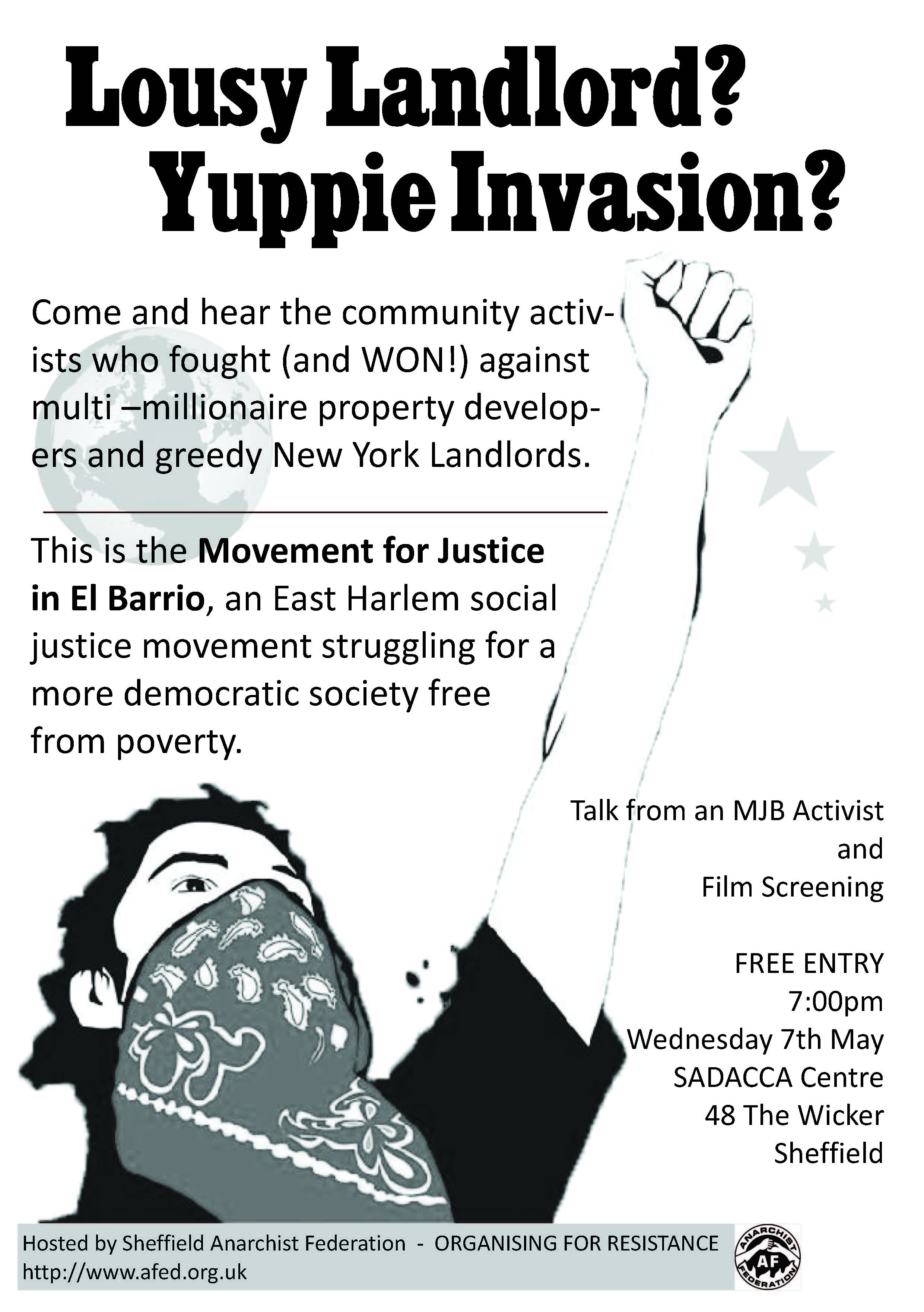 Come and hear the community activists who fought (and Won!) against multi-millionaire property developers and greedy New York landlords.

Talk from and MJB activist and film screening.

“BEST POWER TO THE PEOPLE MOVEMENT IN NYC” - VILLAGE VOICE

“IT IS REAL GRASS-ROOTS DEMOCRACY, AND IT IS BEING PRACTICED BY THE IMMIGRANTS WHO LIVE IN EAST HARLEM”- DAILY NEWS

For Movement for Justice in El Barrio, the struggle for justice means fighting for the liberation of women, immigrants, lesbians, people of color, gays and the transgender community. We all share a common enemy and its called
neoliberalism. Neoliberalism wishes to divide us and keep us from combining our
forces. We will defeat this by continuing to unite our entire community until we
achieve true liberation for all. Movement for Justice in El Barrio was founded
by immigrants and low-income people of color fighting back against the effects of
neoliberalism and discrimination in all of its forms and operates on a commitment to the ideals of self-determination,autonomy and participatory democracy. We believe we have the right and responsibility to lead our own struggle for justice by making decisions collectively and democratically and by developing our political analysis through the examination of the root causes of oppression.Driven by multi-national corporations and profit-seeking landlords and facilitated by city officials,
gentrification has swept New York causing the grand-scale displacement of low-income people of color and immigrants from our communities. East Harlem is experiencing a wave of harassment, abuse and intimidation in attempts by greedy landlords to evict us from our homes in order to raise rents and increase profits.

Movement for Justice in El Barrio isfighting back: “We Will Not be Moved!!! No NosMoverán!! We have fought hard for 3 years and made great strides in building a 400-member community-led social justice organization. We have successfully protested, marched, gone to court and fought back against the actions of multinational corporations, abusive and greedy landlords, and the city institutions that are agents of the gentrification of our neighborhood.

• After months of fighting against the most powerful landlord in El Barrio, we celebrated our victory over Kessner as we forced him to sell all of his 47 buildings. While he viciously attempted to drive histenants from their homes, we turned the tables on him and drove him out of El Barrio.

• Through our “Consulta del Barrio”, we hit the streets to facilitate self-determination by consulting with the community as to what our next issue would be to address as an organization. Deeply inspired by the Zapatistas, we implemented our own form of Urban Zapatismo in the heart of NYC through grassroots participatory democracy involving the community.Through this process, 1500 community members participated directly in a community-wide vote, townhall meetings, and hundreds of one-on-one interviews.

• In October, we organized the first-ever “NYC Encuentro for Dignity and Against
Gentrification” tobegin to build a city-wide, national and international network
against gentrification. Representatives of 27 groups attended from as far as Rhode
Island, Pennsylvania, Connecticut, and New Jersey.

• Our organizing model has attracted attention fromaround the world and we have been proud to share this model with groups and people across the nation and across the globe. International Campaign in Defense of El Barrio: Gentrification is one of the devastating manifestations of neoliberalism at the local level,but the threat transcends borders. Governments and institutions all over the world are sanctioning the violent, unjust, and inhumane displacement of people and communities from their rightful homes. As part of International Campaign in Defense of El Barrio, we are organizing on a transnational level to combat displacement in El Barrio by building a multi-nationalnetwork to go after one of our main targets, the multi-national corporation Dawnay, Day Group at their central headquarters in London and on multiple continents where they hold property.


Purpose of Tour: Through our speaking tour, we will share our organizing model, our vision, and our efforts on a local and international level in order to raise consciousness around the struggle against gentrification, gain allies in the struggle and raise the funds necessary to continue organizing for justice in 2008!