Today, activists from across the Midlands and South Yorkshire met in Nottingham to co-ordinate activities against the British National Party (BNP). Around 100 campaigners met at the Queen's Walk Community Centre in the city for a conference organised by Nottinghamshire Stop the BNP.
Participants discussed the ways in which the BNP could be opposed, the formation of a regional anti-fascist network and the possibility of protests against the BNP's Red, White and Blue Festival.

Organised annually by the BNP, Red White and Blue is a members-only event which has previously been held in various locations. In 2003 the event descended into chaos when a drunken brawl resulted in Burnley councillor Luke Smith bottling a fellow party member.

The BNP had intended to hold the event in the same place this year, but these plans were thrown into turmoil following a split in the party. Warner is currently refusing to allow his land to be used for the festival in protest against the expulsion of a number of prominent party members including Broxtowe Borough Councillor Sadie Graham.

Campaigners stated their intention to mobilise large numbers of anti-fascists to prevent any festival taking place should the BNP - or any faction thereof - attempt to hold such an event in the region. They also commited themselves to opposing any new far-right party emerging out of the current turmoil within the BNP.

Trevor Masters from Nottingham said, “The BNP is a dangerous organisation promoting divisive, racist policies. They cannot be allowed to organise freely in the region. Anybody concerned about the threat they pose should get involved and help ensure that Red White and Blue doesn't take place.”

"They cannot be allowed to organise freely in the region"

"They cannot be allowed to organise freely in the region". Who, exactly, gives these self-appointed totalitarians the right to say who can and can't organise freely?

Who exactly are the totalitarians?

Whilst we might all agree that the BNP are a foul organisation, to deny them their platform makes you guys little better than Nazis.
Who/what gives you the right to leaflet an area where people have DEMOCRATICALLY voted them in, telling them all they made a mistake and that they shouldn't have done?

Fuck me, you'll be telling us who we should vote for next, let me guess, the Socialist Alliance? Stalin and Hitler would have loved you guys, at least they were a bit more subtle to begin with.

"Who/what gives you the right to leaflet an area..." I don't know, maybe that RIGHT TO FREE SPEECH that you fascist cunts posing as soppy liberals are always banging on about? Jesus, you can try and argue against no platform for fascists, but saying that we don't have the right to leaflet or suggest who people should vote for is effectively saying that fascists should have a platform but antifa shouldn't. And you call us unsubtle on top of that. :D

Whilst no one would argue against (those with sense anyway) that the BNP are only representing a tiny percentage of citizens viewpoints, they are a legitimate political party registered with the appropriate bodies. Antifa (and other local anti-fascist groups) have not mounted the same platform.

To "Exasperated anti-fascist" I congratulate you on your leafletting action, which shows an understanding of peaceful protest, but you should understand that not everyone shares your passion and your left-wing viewpoint.

"Bob", seriously, what is the problem in placing a leaflet through someone's door. Should the Tories/ Labour/ Liberal Democrats et al stop placing party propaganda through the doors in Brinsley as well??

We live in a "democratic" system which actually supports your rights to freedom of speech - why don't both sides just use that platform....or is there a deeper issue of human nature/ extremism in this case?!

What goes around, comes around.

Sitting on the fence (watching everyone else run around!)

As someone has already said, there appear to be a lot of fascists pretending (not very well) to be liberals on this thread. Probably not a good idea to feed the trolls but there arguments are easy to deal with.

"Who, exactly, gives these self-appointed totalitarians the right to say who can and can't organise freely?"

"Who/what gives you the right to leaflet an area where people have DEMOCRATICALLY voted them in, telling them all they made a mistake and that they shouldn't have done?"

Again, the idea that people should have their rights removed because they don't agree with you is fascist. It's a funny idea of democracy you seem to have where dissent isn't allowed. In fact it's those claiming to rage against totalitarianism that show themselves to be the totalitarians.

"the BNP ... are a legitimate political party"

They're not legitimate to me, and nor are any other groups with clearly racist, xenophobic, sexist and homophobic policies. Hitler's Nazi party was legitimate under German law, but I can't imagine many people these days think he shouldn't have been opposed.

"We live in a "democratic" system which actually supports your rights to freedom of speech - why don't both sides just use that platform."

The BNP don't use that platform because, despite their constant whinging to the contrary, they are opposed to free speech. They have sought to curtail the free speech of ethnic minorities, of Muslims, of gay people, and of their political opponents, through populist rhetoric and physical violence. Sorry fence-sitter, no one can remain neutral on this issue, as past fascist-appeasing has shown. 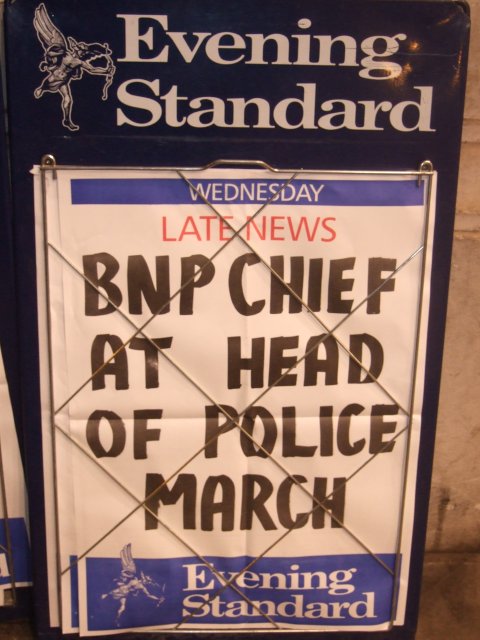 A senior member of the BNP marched at the head of a huge police demonstration over pay in London today. Richard Barnbrook, the far-Right party's leader in London, walked alongside top members of the Police Federation

Mr Barnbrook, a BNP councillor in Barking & Dagenham and a candidate in the election to pick London's next Mayor, told the Standard he took part to support the police and denied his presence was an embarrassment. An estimated 22,500 off-duty police officers, many wearing white baseball caps with the logo "Fair play for police", walked from Park Lane to Millbank, passing close to the Houses of Parliament.

Police Federation officials claimed they were powerless to prevent Mr Barnbrook from marching. Spokesman Metin Enver said he was not invited specifically but police officers recognised him when he turned up. He said: "Some of my colleagues saw we had the BNP Mayoral candidate with us. The one thing we want to make clear is we didn't invite him. It wasn't a closed march. He chose to attend by his own accord which is his right in a democracy. It is disappointing if anyone chose to join the march for their own agenda.

"We didn't ask him to leave because whether we like it or not we live in a democracy."

Mr Barnbrook said: "I was there to support the police. I spoke to one of the organisers of the march and I explained who I was and he was quite happy about it. We did some interviews for BNP TV. I spoke to a few Pcs and they were happy to talk."

More from the Evening Standard at: BNP chief on police march