The price for West Texas Intermediate (WTI) oil touched $100 on January 2, 2008, a new milestone. According to TheOilDrum.com, WTI oil price has been giving a very clear signal of pending shortage for over five years now, and in breaching the symbolic $100 a barrel mark, continues to do so. Those driving the world economy have steadfastly ignored this red warning light. In doing so, they are steering the world toward an energy disaster characterized by shortages, high energy prices, inflation, growing inequity, civil unrest and famine. 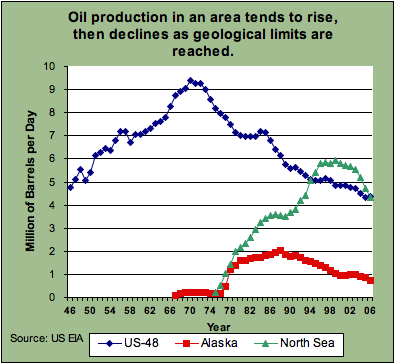 Coming as it does on the eve of the Iowa caucuses, the breaking of the $100 dollar barrier for oil prices will likely be treated by many as an almost imperceptible change in our world. By Friday it will likely be lost in the discussion of the political events unfolding.

The $100 a barrel price is a sign that times will never be the same again. According to TheOilDrum.com, the world is entering a new era, where the supply of energy will come to dominate the political landscape in a way that is currently not recognized by any of the leading candidates.

Over the past two years, citizens have been repeatedly assured that there is no problem with future oil supply. Because of a perceived need to present both sides of the argument, the public has heard false promises of lower future prices, and been beguiled by the possibility of a price collapse in the face of excess supply.

Recently, various qualifiers have started to appear in oil discussions. These qualifiers include the need for increased investment in exploration and improved production technologies. The media fails to mention that the needed investment will be at an increasingly diminished rate of return, to the point where it becomes economically unattractive to search harder and harder for very small quantities of oil and gas.

Both oil and natural gas resources around the world are found in underground reservoirs of a finite size. Many of these oil reservoirs have now been producing for over fifty years. In that time, the vast quantities of oil that were in place have been reduced. As the quantity of oil remaining in place falls, the rate at which oil can be recovered also falls. This makes it necessary to drill additional wells into the reservoir in order to maintain the level of output.

According to TheOilDrum.com, at some point enough oil will have been extracted that no matter how many more wells are drilled, overall production from the field will go into irreversible decline. And as field after field reaches this condition, the overall production of oil for the region will begin to fall. This happened to the United States in 1970 when oil production reached a peak. US production has since declined from a maximum of over 9.6 million barrels a day (mbd), to the current level of around 5 mbd. More recently, the oil fields of the North Sea, the Alaskan fields on the North Slope, and the huge Cantarell field in Mexico have entered irreversible decline.

As these fields deplete, smaller fields have been brought into production, but these small fields do not last as long. Drilling activity must be increased in order to find even smaller fields. These, in turn, deplete more and more rapidly, exacerbating the need for new wells.

According to TheOilDrum.com, the world is now reaching the point where all of the oil fields of the world are in aggregate coming to peak production. As peak world production draws near, the rate of increase in oil production can be expected to stall because of constrained resources. This can happen even with rising demand. Once production falls short of what is needed, oil prices can be expected to increase, so that demand is brought in line with available supply.

At this point, countries that still have a surplus of oil to export are seeing their economies boom. This growth brings an increase in their own demand for oil, which reduces the amount that can be made available for export. This higher oil use by exporting countries reduces the available supply to importing countries, further accelerating the rise in price. The countries least able to afford the increase are likely to be affected most.

According to TheOilDrum.com, the world has now entered a period of fragile balance between demand and available supply. Unfortunately the situation cannot be expected to improve. The increasingly limited ability of nations such as Saudi Arabia and Russia to increase oil production is already becoming evident, leading to a reduced potential for raising world production.

It now appears unlikely that the world will ever see a daily oil production rate of 90 mbd, even when natural gas liquids and condensate are included. Thus, future projections that speak glibly of numbers above this level are foisting a canard on the world's population that all will come to regret.

In the coming months, the $100 per barrel marker will be lost in the debate over other issues. According to TheOilDrum.com, limited oil supply is not an issue that will go away. Rather, it is an issue that will steadily increase in importance. Eventually, the cries for action, and for culprits to blame will become over-riding -- at a time well within the first term of the presidential candidates.

These candidates now pay little attention to energy policy, but that must and will change. Hopefully, greater concern for energy policy will occur before events force a change, but so far the grim markers along the way have largely been ignored.

About The Oil Drum

The Oil Drum is a web-based community that discusses all aspects of energy -- from science and technology to its societal and geopolitical impacts. The editors and readers are drawn from many disciplines in academia and industry. The Oil Drum has a staff of more than twenty including individuals from the United States, Canada, Europe, and Australia.

The Oil Drum's parent organization is the Institute for the Study of Energy and Our Future, a 501(c)3 corporation. The Institute is funded solely by private contributions and advertising revenue from The Oil Drum's website.