Some photos from, Sheffield Guantanamo Campaign's 11th September 2007 protest outside the Town Hall. 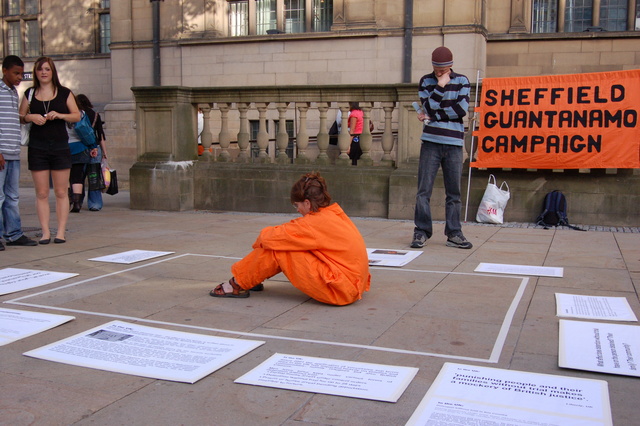 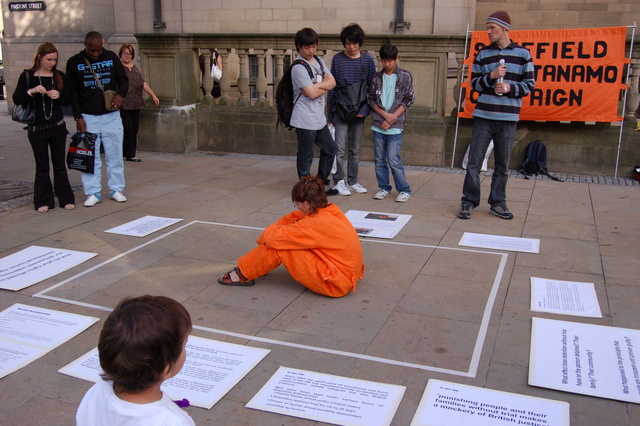 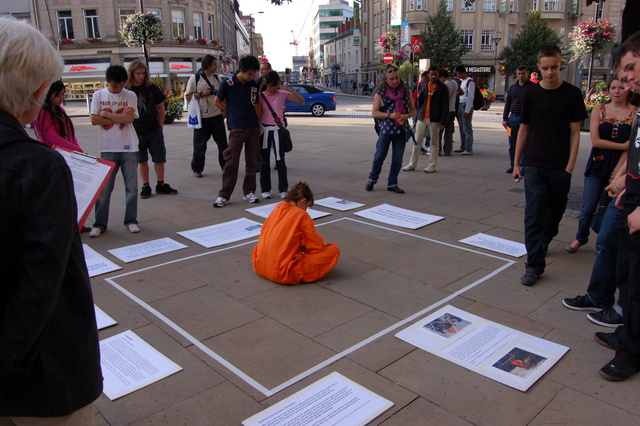 Lots of people stopped to take leaflets and read the text on the boards.

A protest against the Guantanamo Bay prison camp is held on the 11th of each month in Sheffield, 4:30 to 6pm outside the Town Hall.

Also there is a proposal for a month of actions and an organising meeting has been called for the 19th September (I assume at 7:30pm):

"The Campaign Against Criminalising Communities (CAMPAAC) has called for a
month of action against all current - and proposed developments to- anti
terrorism legislation culminating in a lobby of Parliament."

"The Sheffield Guantanamo campaign has responded positively to this proposal
and have organised a meeting for the 19th of September at Victoria Hall to
discuss the appropriate action that could be taken in Sheffield. We are
hoping that many organisations in Sheffield will join us in opposing these
critical attacks on our civil rights and would like to extend an invitation
to you and your organisation for the meeting on the 19th."

Coalition Against ‘Anti-Terror’ Powers:
Proposal for a month of action in Oct-Nov 2007

This proposal is addressed to activists who want to defend civil liberties and communities against the politics of fear and insecurity that has been unleashed in the name of ‘anti-terror’ measures. We propose a month of collective action throughout the country to engage people at local level and at Parliamentary level. An effective campaign requires a coalition of civil liberties activists, migrant groups, Muslim groups, lawyers, journalists, academics, and trade unions amongst others. This initiative is already supported by several relevant organisations, including Peace & Progress, SACC and CAMPACC.

Within weeks of becoming Prime Minister, Gordon Brown has set out sweeping counter terrorism and security measures, which will go to Parliament sometime after its next session begins in early October. These measures include a longer limit for detaining suspects without charge from anywhere between 28-58 days. The current limit of 28 already exceeds those in force in other European countries with adversarial judicial systems comparable to the UK.

The new terrorism bill extends a trend beginning with the Terrorism Act 2000, whose broad definition of terrorism included normal political activities, as a basis for criminalising any association with such ‘terrorism’. This law was followed by three more (in 2001, 2005, 2006), which have proliferated measures for extra police powers, punishment without trial and treatment of ‘suspects’ as guilty, thus bypassing due process. These laws have normalised detention without trial under various guises, such as control orders and immigration rules, whereby the accused never see the evidence against them.

A recent prosecution illustrates the vague crime of association. Four university students and a schoolboy from Bradford were jailed for possessing DVDs of radical Imams – officially labelled as material ‘for terrorist purposes’. The defendants were charged under the Terrorism Act 2000, which was supposedly aimed at people who hoard detonators and combustible chemicals. Thus a court now considers DVDs to be as dangerous as Semtex; this says much about the way in which security laws are being used politically.

Common approach of the coalition

The campaign will oppose all current anti-terror laws as well as their extension. We will attack their injustice, political agenda and human effects. This broad approach will help to involve everyone affected by those powers, will provide extra reasons to oppose their extension, and could deter their use.

Special ‘anti-terror’ powers are needed only for various political purposes. Their use is inherently unjust and unnecessary to protect the public from violent threats. The ordinary criminal law would be adequate for this purpose. We ask supporting organisations to join the coalition on this basis.

We propose a month of activities starting in October and continuing through mid-November, for maximum flexibility, given that the month of Ramadan extends from mid-Sept to mid-Oct. This timing will also help supporters to build mobilisation locally and nationally.

The role of activists will be crucial at the local and Parliamentary level. Viable initiatives can only come from them. Activities could include a mix of local and London events, for example:

* Putting anti terror laws on the agenda of local organisations, such as anti-war, religious and trade unions.

* Petitioning local MP to vote against any extension of ‘anti-terror’ powers, with delegations to and local lobby of constituency MPs.

* Giving out information outside community centres and places of worship

* Letters to the mass media, local media plus articles in alternative media.

* Lobby at the House of Commons, with a public meeting in Parliament in October/November