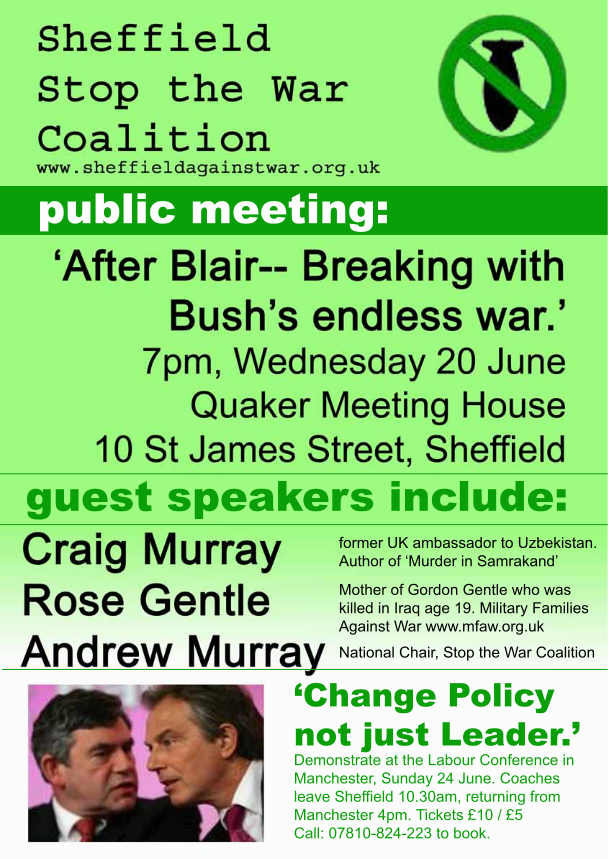 Tony Blair is standing down as Prime Minister in large part because he has been forced out by the anti-war movement. His blind support for George Bushʼs wars in the teeth of public opposition, the exposure of his lies about weapons of mass destruction and the disaster of the occupation of Iraq, all wrecked his political reputation. It was revulsion against his backing for the Israeli attack on Lebanon last summer that finally forced him tobring forward his departure date.

Now we need a change of policy, not just a change of leader. We need the new Prime Minister to break with the disasters of Blairʼs foreign policy. It means:

* withdrawing all troops from Iraq
* ending the occupation of Afghanistan
* saying no to any attack against Iran
* pulling out of the reckless ʽStar warsʼ project
* supporting justice for the Palestinian people.

Craig Murray: Legality, Morality and the War on Terror

Last time Craig Murray was in Sheffield a video was produced of his talk, you can watch it or listen to the mp3 of it here:

Also his web site is here: