The Leeds Truth Festival 11th-13th May

As part of the wake-up continuing worldwide, or those parts of the world where people have sufficient resources and time to figure what's really happening, the Leeds Truth Festival explores some controversial areas 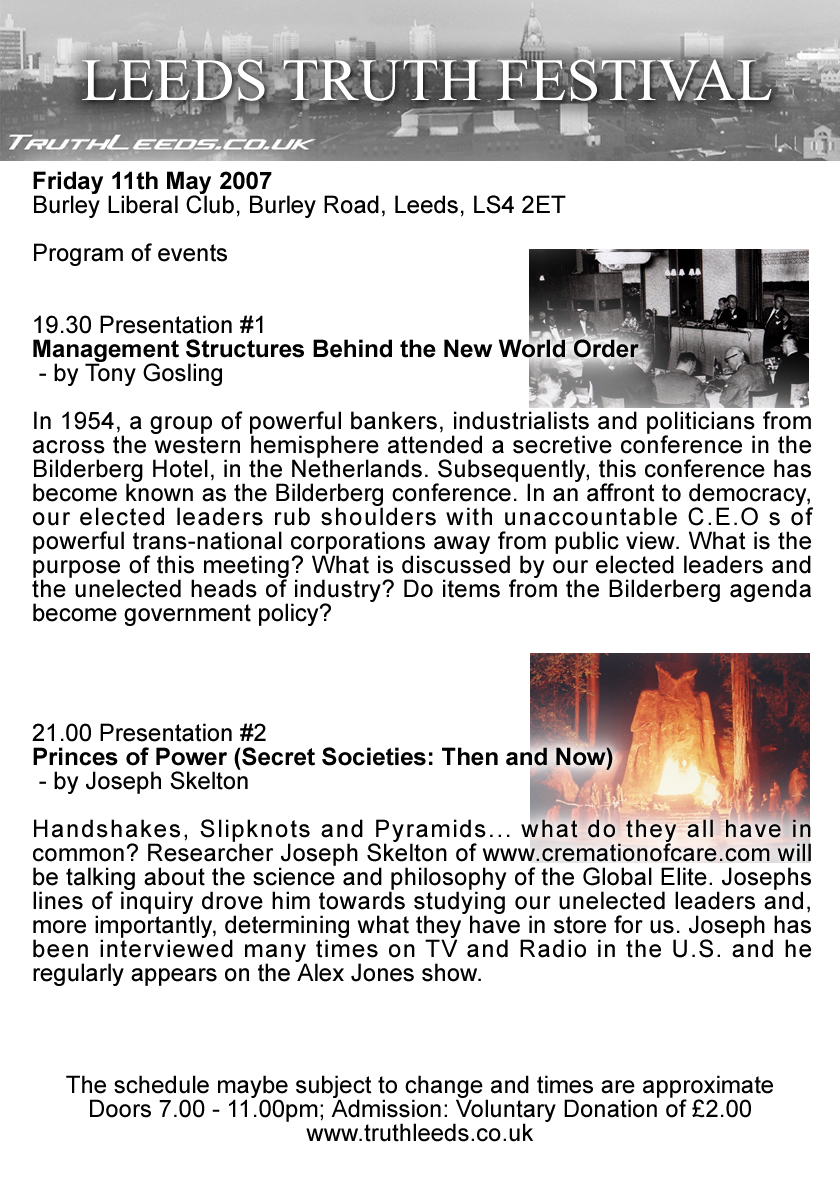 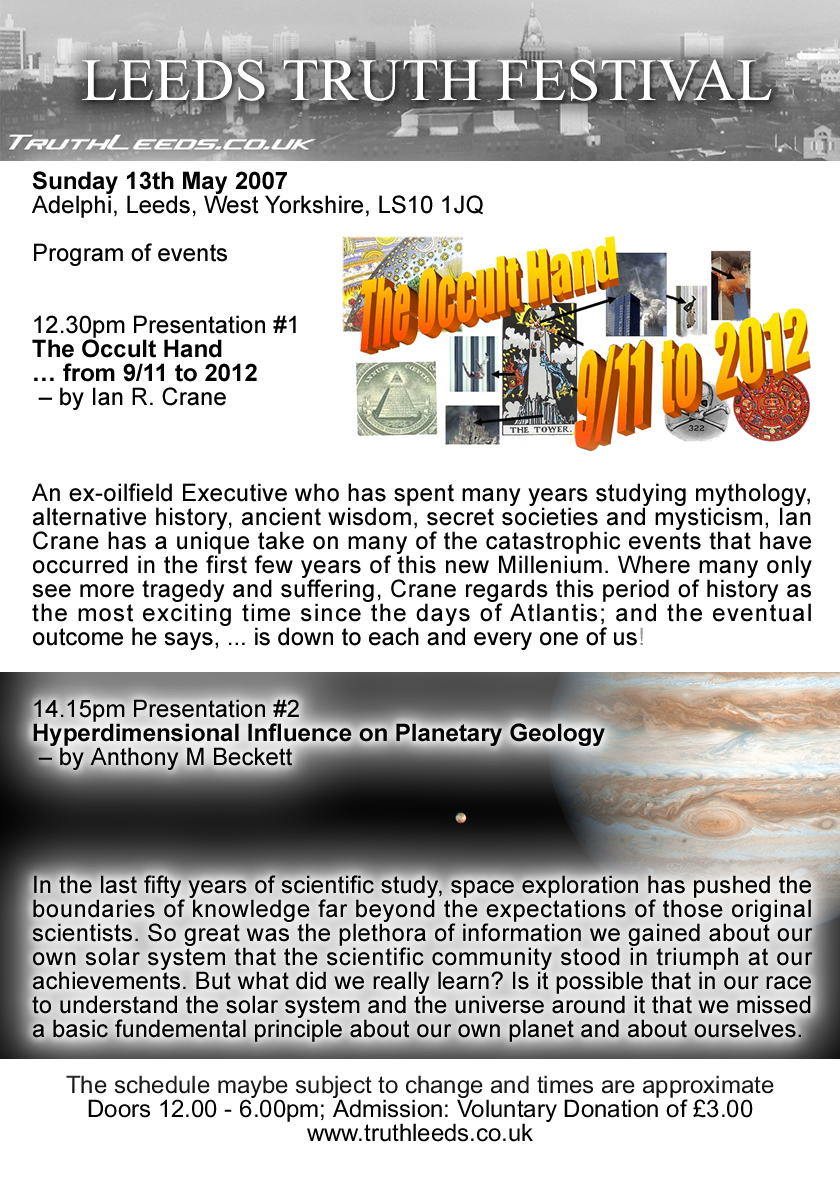 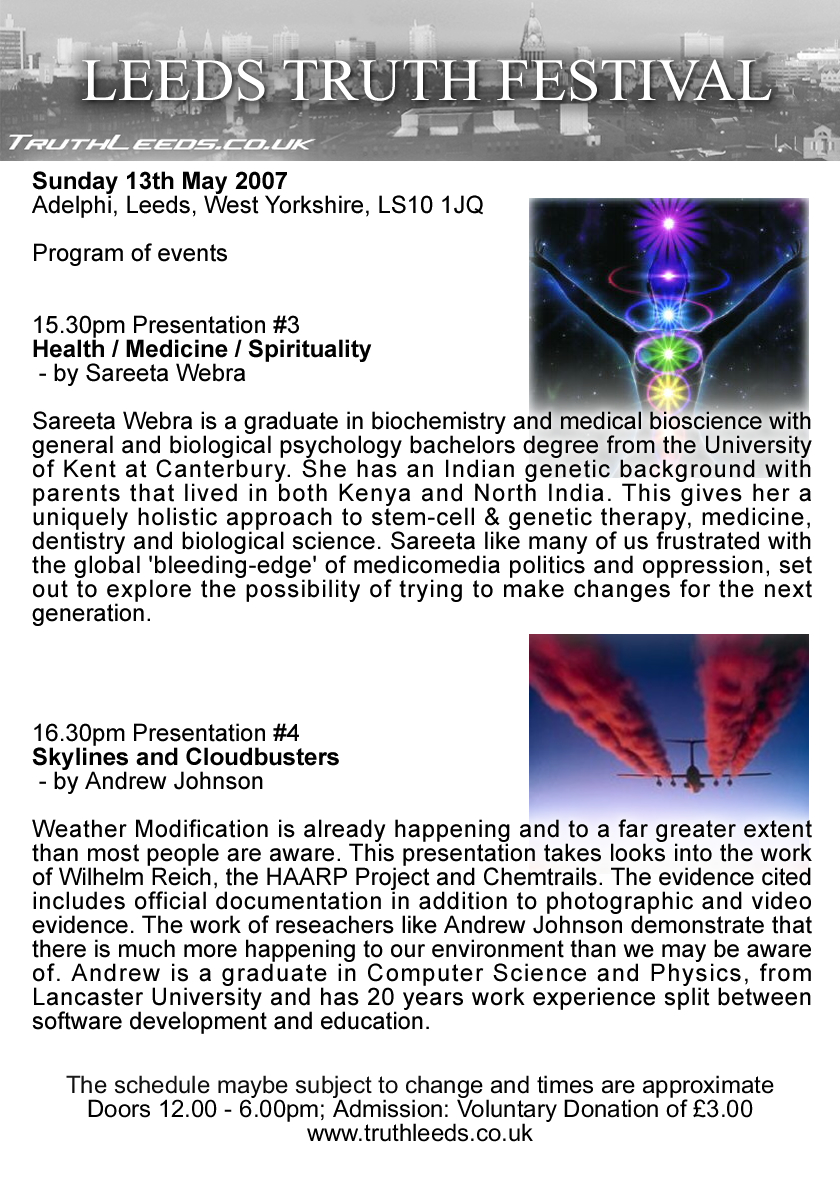 Bound to send some Indy types into sneery mode, the newly-formed Leeds Truth Group presents information on the Bilderbergers, Secret Societies, health, the changing solar vibration concretised in the new world order, health issues, and resistance to the global control and weather wars grid.
A bit beyond 'fighting the fash' or the carbon emissions scam, but worth some regard

Is this for real?

This looks like some wierd attempt to discredit 9/11 investigations by linking it to all this weird shit.

This Truth festival contains a lot of stuff that I find on sites like the BPP one. Don't they even support Ike? Wierd - are we joining some sort of mystic circle as far left and right join in an anti-Globalist stance?

More like right meets wrong, and finds it wanting

What the fuck is that!

Neo-Nazi's, Hippies and Hogwarts. What the fuck holds that together apart from all being lunatic bollocks. At least now we can see the truth about the 'truth' movement. Talk about the weekend from hell.

I'm driving past Highroyds later, I'll pop in and tell them to get some day release forms ready.

Get real all you people
Each of the topics are popping up all over
Things have changed and we need to keep ahead of the changes
On chemtrails for example, do your research and find out what's really happening
I know this isn't a favourite for indyianistas but take time out to study

http://imageevent.com/firesat/strangedaysstrangeskies
Study the material, ferchrisakes
Research and counter it if you have to
Dont just resort to the usual left gatekeeper piss take of tinfoil hat but study it
That will soon change your mind

If I were organising an event like this -- one that is clearly aimed at people who already think 9/11 was some kind of an inside job -- it would have a totally different focus, these issues are more important:

- Empire, permanent war, the "war on terror", oil and capitalism

- The anti-war movement, Vietnam to the present

- The energy crisis and climate change, peak oil and permaculture

If you think that 9/11 wasn't some kinds of an inside job then perhaps the debate that happened here last month might be a good place to start:

Regarding contrails there is an issue here, see this site for example:

"The word Contrail stems from 'condensation' and 'trail'. Aviationsmog (that's what it really is) is caused by airtraffic at great heights. Each day, jetengines of airplanes dump vast amounts of water (ice), CO2, soot particles (condensation nuclei), aërosols and chemical substances. Airtraffic thus not only alters the properties of the higher regions of our troposphere but also all the regions below, right down to groundlevel. This extra layer of man-made high-altitude smog probably infuences weather, climate and the quality and quantity of the sun's radiation that reaches the surface of Earth ("global dimming."). Aviation-smog is responsible for more clouds, rain, drought, bigger hailstones (megacryometeors), a stronger greenhouse effect (global warming), and, maybe, even gives extra power to hurricanes. Still, aviation-smog does not get the scientific and political attention it deserves"

However I have yet to be convinced that we are dealing with chemtrails...

run for the hills

Of course your list of suggestions is excellent, run for the hills. Matters of prime importance
Our thought re the Leeds Truth Festivalwas to get 'at the back' of what's going on, which if you dig enough, entails you entering new realities, if you're willing to go there.
Also there are tens of thousands of people willing to go with the wierd end of stuff, who will just yawn at the 'sensibilist' agenda. Why not go for them too?
We have to achieve a widespread consensus to challenge the way the powers that be are disastrously changing the world, and not also just go along with the old paradigm left/right view of things
There is much coming from the old paradigm left that is completely disinformationist, much as there is material coming from what might be regarded as old paradigm right, ie that which is antiwar, anti-state, anti-centralist, pro-freedom, pro-constitution, etc etc
The organisers of the Leeds Truth Campaign are aware of the haw-haw response to the topics of the festival
imo that doesn't mean they are in the least invalid
They are open to debate and need some focus.
I'd be happy to see a series of presentations focussed around your topics and would be more than happy, as I'm sure the Leeds Truth group and the WY Campaign would, to help you organise something around your suggestions
Time is short and we really need to defeat the bastards

Yeah this is REAL important while people are dying everyday. You could have done any kind of event to make people more aware of REAL issues and fuck, wait for it.. direct people into taking direct action.

But hairy fairy conspiracy theories are more important though, right?

Spreading useless information (or information which doesn't lead to any form of direct action) does NOT make you an activist. It makes you an entertainer.

That's the pitiable factor
People are dying everyday by their thousands worldwide and not from natural but rather from created causes
The George Herbet Walkers and the Cheneys feed on this. Not least the Kissinger and the heinous network behind
Get a grip

BTW that "truth" site looks like an Indymedia rip off.

Who are the wanabes in this, and oh my, failing terribly at it?

The West Yorks forum? I run that under my other more usual alter ego. It more nearly resembles umpteen other BBs
There are forms of direct action in operation that challenge the whole list of subjects that the festival presents. But that might seem even more arcane to some of those here. So let's leave that aside for now
It's Saturday night and I should be out and about.
Here's some enjoyable material from the wonderful Immortal Technique who has got the point

No, the other site

The prime motivator and organisor of these events, and one of the proposed speakers, were physically assaulted on their way home from the pub, resulting in the hospitalisation of the one who'd been knocked unconscious.
Nothing to worry about,of course, just a coincidence

Hey, I slipped and banged my head the other day. The thing is I don't remember the floor being wet before. Just a coincidence? I sense the occult hand at work.

I just have to interject here with some words. All this arguing about what is real, what is not, who does this, who does that... is there any real point to it? If you think there is a point, then ask the question "Why am i getting so angry about this?"

Does it matter whether you believe the information or not? After all, it is only information and will ultimately become 'formless'...that is to mean, it will inevitably dissolve.

It's time we brought balance to humanity by re-discovering the 'FORMLESS' nature of this wonderful Universe!!

What do we gain from constantly focusing upon 'FORM'- things, thoughts, people...? We gain nothing but more form. The world is bursting at the seams with it!

If all these 'truths' are to have any effect at all (whether they are true or not true) then we need to stop arguing about them. We don't need to be 'ACTIVISTS' because this just causes more arguing, more tension, stress and violence.

If we want to Save the Planet- we need to begin looking into ourselves and understand that we are ultimately FORMLESS BEINGS who manifest FORMS into this reality. This is reality.

The only way to make a difference...is to do nothing. Be still and peaceful. Don;t fear the consequences as they don't exist- except in the FORM of MIND (which is conditioned anyway...) in TIME. The Illusion we have all been conditioned to believe is our LIFE.

Start living life properly and begin to understand that you are NOT your MIND but you are ultimately a FORMLESS BEING!! This will bring peace to the Earth. Peace will manifest...

Jay take your own advice

It's funny how your words took the form of meaningless teenage drivel. But take your own advice don't do anything. And that means don't write here again, ever.

It was fucking great. We had some fine young folks up from Manchester. Dont tell me Mcr gets the point, while Leeds lags
The energy generated has to be experienced
Dont continue to miss out or come shit hits fan I'll decamp over there.

What's the name of this site, www.groupthink.org.uk ? or is it the 'indy' only applicable in a limited sense?

Some people freak out if someone starts talking about stuff not mentioned in the Guardian and of course prople will snigger at it like little kids - that's their problem.

Sometimes people need to be a little more grown up and less self concious about what is, only information, indestead of conforming to the social programming that even mainstream, left high priests like Chomsky cover. If we weren't so bothered about the opinions of others we wouldn't be in this mess, running around triying to fit in with the current line of thinking.

Appeals to riddicule, poisoning the well and rants are like an ape weilding a bone in the current conflict of ideas.