The Sheffield Trades Union Council has called a Mayday march and rally, assemble at 11am at Moorfoot and march to a rally at noon at Sheffield Town Hall. 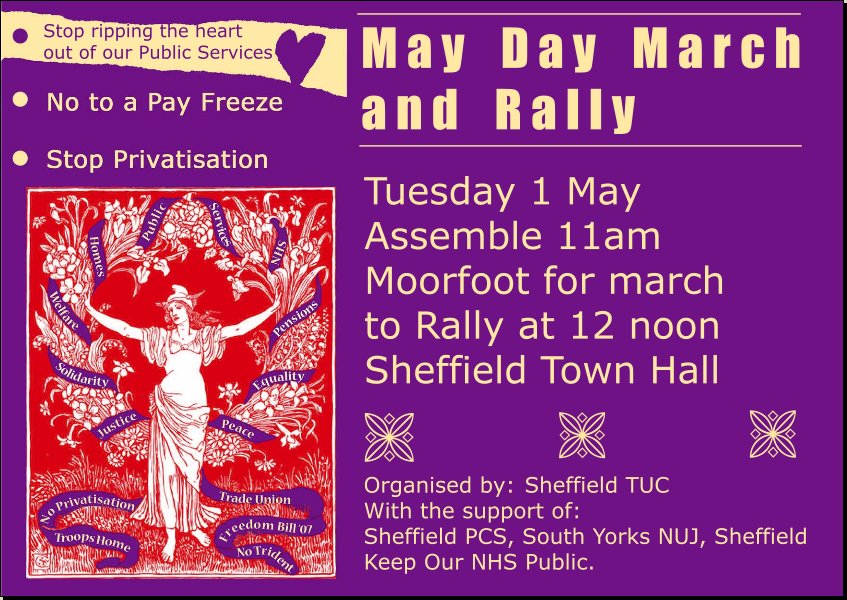 The protest has been called by the Sheffield Trades Union Council with the support of the PCS, who have many members on strike on 1st May, the NUJ and Sheffield Keep Our NHS Public.

The slogans for the demo are:

* Stop ripping the heart out of our Public Services

* No to a Pay Freeze

Hiya there, o i do like that picture it reminds us that May-Day isnt just a workers day but holds meaning for us humans, who see the beauty in nature.


On a long workerist note:

Im very spectical of this Trade Union Freedom Bill, which is trying to be promoted thru May Day, it smells of the typical broad left thing e trade union buercrats / pick n mix of activists, if history teaches us anything and May Day being full of history.

One example 1926 period Anti - Trade union law repealed, Labour and the Aloof Trade Unions betray the workers in the in the 1926 General Strike, one consequence of the Anti - Trade Union law being repealed in a top down manner and not through self - organisation & a direct - action workers movement as a balwark, ie leading to the hungry thirties and world war 2 ie the failure of the Labour Left.

The Anti -Trade Union laws made under Thatcher, we cannot leave it to our so called leaders ie Billy 'Sit On His Bum' Hayes or i have next to no support amongst the working class John Mc Donnell etc , to scrap / repeal these laws, ie LOBBYISM FAILS !

More up to date

Just to mention the 1970's and 84 - 85 period and the failure of bureaucratic trade unions then.