Today at 16:00 a peaceful demonstration was held at the Shell Garage on Hoyle Street, Netherthorpe in Sheffield.
This demonstration was an act of solidarity with the people of Rossport, County Mayo, Ireland and the campaign ShelltoSea, who are opposing Shells plans to build a potentially lethal high pressure gas pipe line and refinery in a marine special area of conservation. 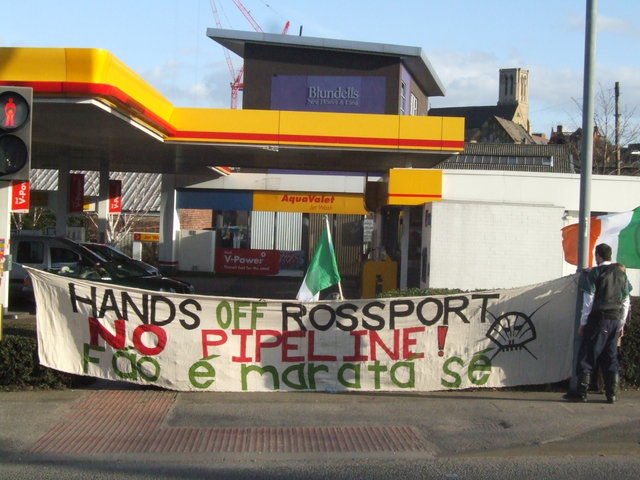 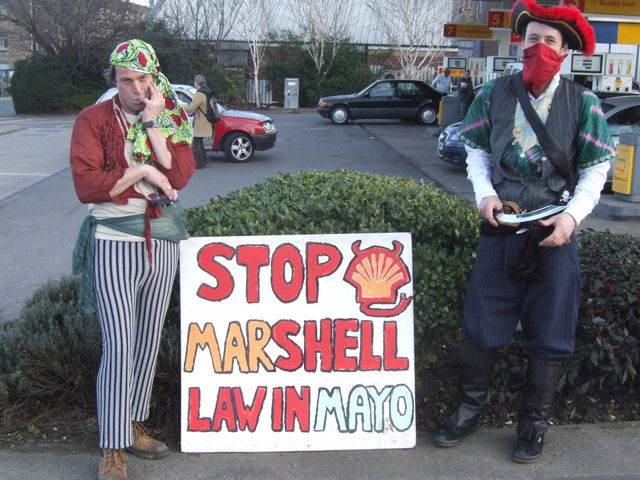 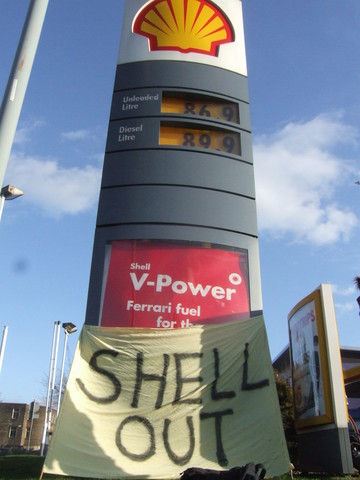 The local people of Rossport are suffering bullying and intimidation tactics from both
Shell and the Irish Government.

A banner declaring
"HANDS OFF ROSSPORT"
"NO PIPELINE"
and "Leave it as it is" written in Gaelic, was hung from the garage roof by pirates
bearing the Irish Tricolour.

Fliers explaining the reasons for the action and the dangers of Shells proposed pipeline
were distributed to Shells customers with a request to boycott Shell.

For more information on the local campaign please see:

Shell,Statoil and Marathon, supported by the Irish government, wants to build a
dangerous, experimental raw gas pipeline and refinery in northwest Ireland. But they are
being stopped...


* Health and safety
The pipeline, at 5 times the usual pressure, would be built over unstable bogland, with a
history of landslides and in very close proximity to people's homes/ It would be 70m
from the nearest home, 30m from a public house and 3 families would have to cross the
pipeline every day to leave their houses.
A recent independent safety analysis by US based pipeline consultants found: "The Corrib
pipeline is not a 'normal' pipeline, given its potential to operate under exotically high
pressures adn because of unknown gas compositions associated with gas field production.
This can seriously increase the likelihood of pipeline failure."
The safety analysis said: "pipeline routing should be at least 200m away from dwellings
and 400m away from unshelterd individuals to avoid massive casualties and/or multiple
fatalities."

* Environment
The refinery will have nine chimneys up to 140ft high releasing carbon dioxide and
methane. 16 houses are within a 2km radius of the plant. Air and water emissions from
the refinery would pollute the local environment.
The emissions from the proposed refinery at Ballinboy will pollute Carrowmore Lake which
supplies the region with water. Broadhaven bay is where Shell plans to pump the waste
from the refinery: including lead, nickel, magnesium, phosphorus, chromium, arsenic, and
mercury. This bay provides livlihoods for local communities through fishing.
Shell claim there is "no evidence that Broadhaven Bay is of particular importance to
whales and dolphins", contrary to the findings of a UCC study(commissioned by Shell). The
UCC research team recorded over 220 sightings of seven whale and dolphin species, plus
sightings of two seal species in Broadhaven Bay and north-west Mayo waters.

* The great gas giveaway
The Irish government has helped Shell in this project. In 1975 for oil and gas
exploitation in Ireland the terms were between 8% to 16% production royalties to the
government and a 50% tax rate. In addition there would be an up to 50% goverment
participation in the exploitation of any find, as the establishment of a government
energy company was planned. Moreover gas was sold to government companies at reduced
bulk discount. Successive governments between 1985 and 1992 whittled this away to a
situation where there are no royalties, no government participation, and a 25% tax rate.
Furthermore there is a 100% tax write-off meaning multinationals can count their
production, development and exploration costs as 'tax' and hence pay less tax, or even
conceivably no tax. Laws were changed to allow Shell to use private land through a
Compulsory Aquisition Order. Government owned forestry was sold to Shell for the
refinery site.
Essentially this is a great gas giveaway, while underfunded public services go down the
tube. The privatisation of natural resources is no aberration, when the same is planned
for An Post, Dublin Bus, and Irish Rail, with inevitable impact on jobs and services;
indeed the downgrading of the public health service is to the advantage of the private
sector. Big business enjoys very low tax rates and the super-rich benefit from tax
evasion amnesties, while more than 85% of income tax is paid for by PAYE workers.