Craig Murray: Legality, Morality and the War on Terror

Video of a talk by Craig Murray [former British Ambassador to Uzbekistan], Legality, Morality and the War on Terror, recorded at Sheffield Hallam University on 9th October 2006. 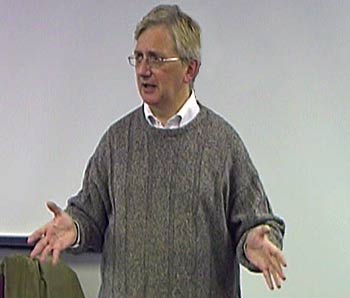 A very interesting presentation on the "War on Terror" and the slide into fascism.

See also, No to Torture - former British ambassador to Uzbekistan speaks out against UK/US torture collaboration, mp3's of Craig Murray recorded at the Edinburgh Independent and Radical Bookfair on Friday, 13th of October 2006:

This works in mplayer and xine on linux, please post a comment if you have a problem with it.

If you want a DVD version please contact Sheffield Indymedia.

Here's Craig Murray's lecture as an MP3. Murray's lecture was very interesting and I'd recommend anyone going to see him speak if you get the chance. His perspective on the war on terror is unique and he's a clear and eloquent speaker.