Five years after 9/11, a large number of protests, screenings, concerts and meetings were held across the US (New York: 1 | 2 | SF Bay Area: 1 | 2 | Los Angeles: 1 | 2) to demand the truth about the events of September 11th 2001 and the subsequent "War on Terror" and the imperial invasion of key countries in the oil-rich Middle East. In the UK over 100 truth protestors gathered outside the US Embasy in London to oppose the official conspiracy theory, see the report, video and photos: 1 | 2.

The attacks of September 11th 2001 have been used, on both sides of the Atlantic, to justify a spectrum of attacks on civil liberties and illegal wars in Afghanistan and Iraq. The 9/11 Truth Movement fears that until the lies are exposed the attack will continue to be used to justify perpetual war, with the next one possibly being with Iran and/or Syria, and further attacks on dissent and freedoms at home. In the UK post-9/11, steps down the road to a police state have included terror raids, shoot to kill, detention without trial, torture training, profiling, rendition and a host of other Orwellian "Big Brother" proposals like ID cards.

The 9/11 Truth Movement has received varied responses from Indymedia, ranging from feature articles condemning conspiracy theorists (NYC) to dedicated 9/11 topics and feature articles asking why the network is ignoring the call for a 9.11 investigation (Portland). In the months following the attack UK-IMC carried many articles questioning the official story and analysing what the attacks would mean for the anti-capitalist left (for example: 9/11: A Desperate Provocation By U.S. Capitalism), but in the years following the attack an ad-hoc policy of hiding all articles questioning 9/11 was adopted. This has now changed, the 9/11 Truth Movement is gradually gaining recognition as a legitimate, albeit still controversial, part of the broad global justice movement.

Read on for more on the events of 11th September 2001, the 9/11 Truth Movement and a look at one of the big unanswered questions, what happened to World Trade Centre Building 7? 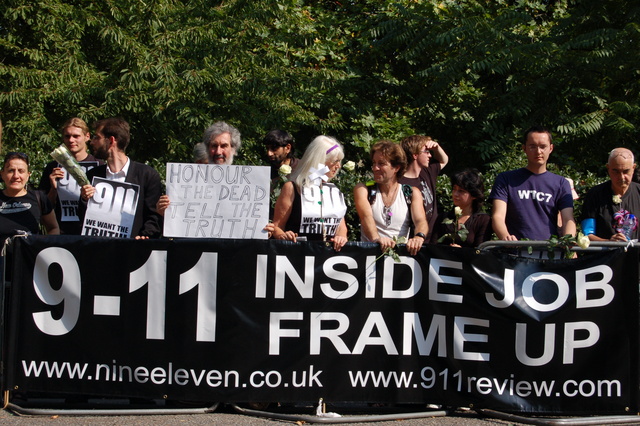 There has been no shortage of media coverage of the events of September 11th 2001. These events have been used to justify an unending war by the United States against whomever it chooses in a new illegal manner: preemptive war. 9/11 also heralded in a new wave of repressive legislation both in the US and UK. Much of this new law contradicts both the US Constitution and basic human rights. These events have been used to illegally incarcerate 600 people in Guantanamo Bay for years in appalling conditions.

While all of these things have been given detailed analysis in the mainstream media, the actual 9/11 events themselves have received only partial coverage. Only news stories that support the Bush Administration's version of what happened that day have been accepted into the mainstream. That is that the attacks were planned and executed solely by those part of Osama bin Laden's terrorist network.

Yet outside the mainstream media, there exists another view of what happened that day. This view says the Bush administration itself was involved the attacks in some way. Some believe that the administration simply let the attacks happen whilst others maintain that involvement was not merely passive but that US officials masterminded the whole event.

What is more, these alternative views are not merely held by a tiny fringe of conspiracy theorists. An opinion poll in August 2004 revealed that over 40% of New Yorkers believed that some US leaders had prior knowledge of 9/11 and "consciously failed to act". Another poll found that 63% of Canadians agreed. A July 2003 poll found that 20% of Germans believed that "the US Government ordered the attacks itself". A Zogby Poll in 2006 found that 42% of people in the US believe that there has been a 9/11 cover up. A 2004 Observer article, based on a poll by ICM, states that, "A majority of the British population now thinks the US government knew in advance about the 9/11 plot to attack the World Trade Centre yet did nothing to stop it, on the basis that it would give America an excuse to wage war on Afghanistan and Iraq. Some 52 per cent believed there was 'a lot' or 'some' truth in this claim, while 39 per cent said there was none at all."

There are mountains of evidence for alternative hypotheses which come from a broad spectrum of academics, scientists, people of faith and independent observers both in the US and elsewhere. This has often been presented in meticulously-researched books with copious cross references to sources of information. Information has also been disseminated through a number of video documentaries, though none of these has ever been aired on UK television.

A whole movement in the US has been created concerning the 9/11 cover up, typically referred to as the 9/11 Truth Movement. This movement has organised protests, teach ins, mass leafletting campaigns, conferences and generally tried to encourage more people to re-examine the events of one of the most significant events in US history.

In the UK a similar, though so far, much smaller group has taken root, the British 9/11 Truth Campaign. Within Indymedia, Sheffield hosted a series of film shows about 9/11 and the oil industry, the "Summer of Truth".

After at first refusing any inquiry into what must be the biggest crime on American soil, the Bush administration finally caved into public pressure and launched the 9/11 Commission - which claimed to be an "independent, impartial, thorough and non-partisan" inquiry into the event. However the Commission's Executive Director was Philip Zelikow, a man who was not just a Republican but someone who had had close ties with the Bush Whitehouse team for more than a decade. Zelikow picked "the areas of investigation, the briefing materials, the topics for hearings, the witnesses and the lines of questions for witnesses". The family steering committee for the 9/11 Commission repeatedly called for his removal without success.

Apart from the media blackout on alternative theories to what happened on September 11th, there is perhaps an even bigger barrier to getting the truth out. That is people's personal prejudices. For so many people the US is simply the good guy in the world, that it is totally inconceivable that US officials had any involvement with the tragic events of that day.

Whilst the collapse of the Twin Towers has been etched into the minds of TV viewers across the globe, many people do not realise that a third massive New York skyscraper collapsed on September 11th 2001. This was World Trade Centre Building 7 which imploded at 5.20pm, videos: 1 | 2 | 3 | 4 | 5 | 6.

WTC7 (7 World Trade Centre, also known as the Salomon Brothers Building) was 47 storeys high, just three stories less than the highest building in the UK, it was not an old building, construction started in 1984 and it was completed in 1987. It was designed, and built by highly experienced architects, engineers and contractors.

The collapse of this 47-storey building is particularly odd since no plane crashed into it, the damage done to it by the collapse of the Twin Towers appears not to have been any more significant then that suffered by other closer buildings which didn't fall down. There were a number of fires of limited extent and unknown duration. FEMA (the Federal Emergency Management Agency) who investigated the collapse could come up with no good reason to explain the collapse and said that the most likely cause was fire damage but also said this "best hypothesis has only a low probability of occurrence" and that "the building imploded".

The preliminary report into the collapse from NIST (the National Institute of Standards and Technology) suggests that the failure of three columns (79, 80 and 81) out of 24 triggered the structural failure of the entire building. When Dr Sunder of NIST was asked why WTC7 and the fate of the building was barely mentioned in their report, he admitted that they have "had trouble getting a handle on building No. 7." The 9/11 Commission Report didn't mention WTC7 and NIST has now contracted out the investigation into the collapse to a private company, Applied Research Associates. The latest word from them is that "NIST would like to determine the magnitude of hypothetical blast scenarios that could have led to the structural failure of one or more critical elements."

A commentator on CBS news, Dan Rather, said on the evening of the collapse that it was "reminiscent of those pictures we've all seen too much on television before, when a building was deliberately destroyed by well-placed dynamite to knock it down".

The debris of the building included molten metal and evaporated steel beams. The temperature to needed to evaporate steel is far higher than the temperature achieved with an office fire.

Firefighters were informed in advance that the building was going to collapse allowing them to evacuate.

Larry Silverstein made $475 million profit on the insurance claim following the collapse of WTC7. In a TV interview he said:

I remember getting a call from the, er, fire department commander, telling me that they were not sure they were gonna be able to contain the fire, and I said, "We've had such terrible loss of life, maybe the smartest thing to do is pull it." And they made that decision to pull and we watched the building collapse.

"Pull it" has been widely intepreted as "pull the building down".

The key piece of evidence cited to support the conclusion of a controlled demolition consists of an analysis of the physics of the collapse -- the building dropped with an acceleration very close to that of gravity. Measurements and calculation have been presented on 11syyskuu and by Heikki Kurttila, a Finnish Doctor of Engineering and accident researcher and by Kenneth L. Kuttler in the Journal of 9/11 Studies. The only way to achieve a collapse of this nature -- one which involves the whole building coming down at close to free fall speed, is for all the structural columns to fail simultaneously. This is not something that could be expected to be caused by fires, especially ones which hadn't even spread across a whole floor, the most plausible explaination does appear to be that it was a controlled demolition.

But if the building was demolished on purpose, then so what? Well to demolish a skyscraper like Building 7 would take very specialist knowledge and lots of preparation -- probably several weeks. Explosives would have to be carefully placed throughout the building, then detonated in an exact sequence for the building to collapse safely without toppling into adjacent structures.

Who could have gained access to Building 7 to preplace explosives throughout the building? The building was home to high-security government agencies and financial institutions residents including the CIA, the US Secret Service, the IRS, the Securities and Exchange Commission and Giuliani's Office of Emergency Management.

Interestingly security for the World Trade Centre buildings was provided by a company called Securacom -- since renamed Stratesec. Two of the principals in this company were President Bush's younger brother Marvin P Bush and his cousin Wirt D Walker III who was CEO from 1999 until January 2000.

There are literally dozens of independent films that have been made about 9/11, following is a selection.

Two radio shows which have featured alternative reports into the events of 9/11.

Some, of the many, web sites related to the 9/11 Truth Movement.

Some Updates, One Year On...

The above article was written almost a year ago, some things that have developed since then are worth noting:

However there hasn't been a decisive breakthrough that might prevent the next war, in fact the mainstream media is busy preparing people for it.