The resistance continues out west; A round up of news from Rossport Solidarity Camp

A round up of news from Rossport Solidarity Camp and the Shell to Sea campaign; re-routed pipelines, plans by Shell to restart work, a meaningless recommendations from a government appointed mediator, thirteen months of blocking Shell and counting, a gathering at the camp and a wee walk to Dublin... 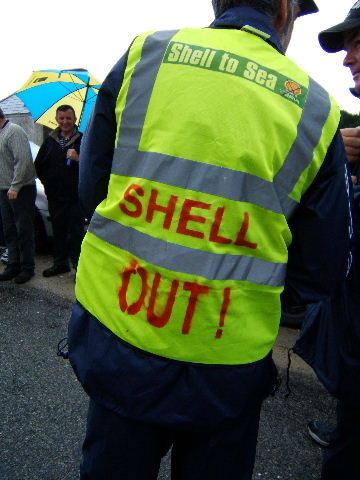 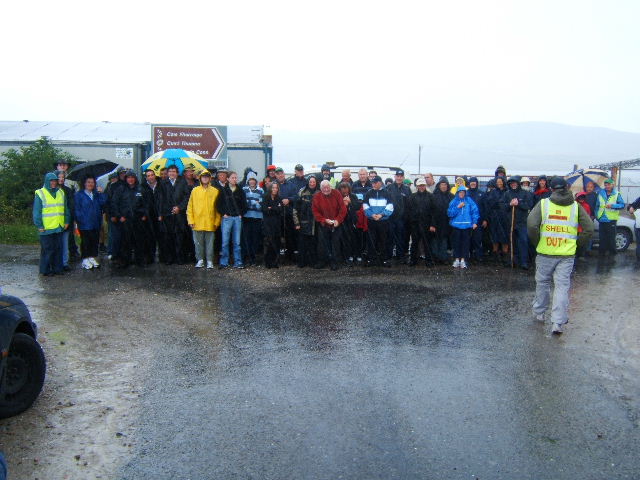 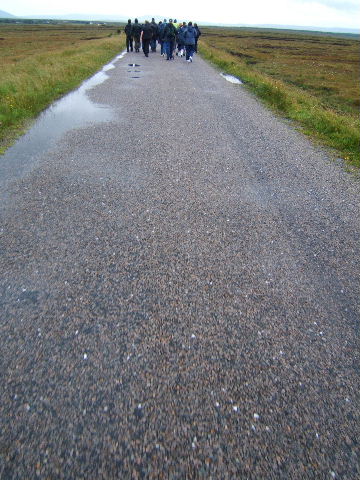 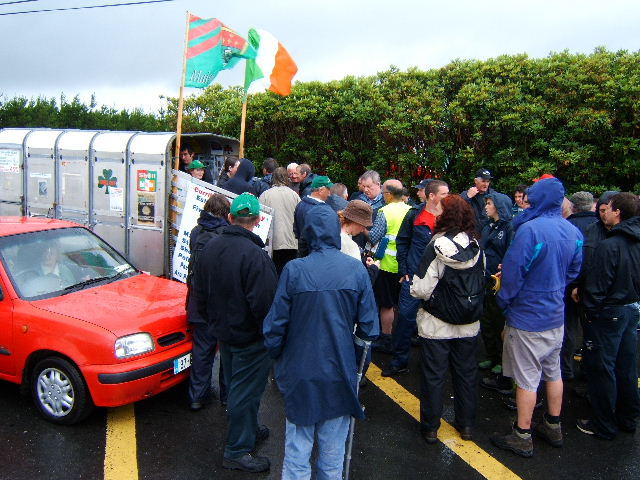 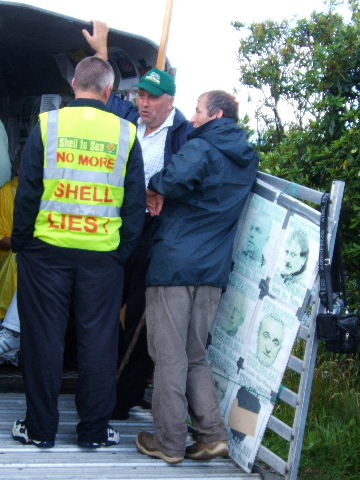 Shell intend to start work in September
Shell has announced that it intends to recommence works at the site of its proposed refinery at Bellanaboy, Erris Co Mayo this September. Work is scheduled to begin with the installation of Axonics water treatment systems. The proposed refinery site at Bellanaboy has been picketed for over thirteen months by local campaigners who have succeeded in stopping all work at the site since the Rossport five were imprisoned at the end of June 2005. Shell’s subcontractors have so far only succeeded in limited preparatory peat removal from the site, which is located on ex-Coillte (state forestry) land consisting of blanket bog. If built the proposed refinery would have a detrimental effect on the local environment and the community it sustains resulting in pollution of the currently clean air and water, negatively affecting health, livelihoods and wildlife. Local Shell to Sea campaigners and members of the solidarity camp vow to maintain the picket and to prevent any attempted work; there will never be a refinery at Bellanaboy!

Peter Cassell’s Report: avoiding the issues
Shell’s announcement came in the wake of the release of a report by Peter Cassell’s who was appointed by Minister Noel Dempsey to mediate between Shell and the Rossport five shortly after their release from prison last October. The report compiled at the request of Minister Dempsey after the collapse of mediation has been widely criticized as failing to address the key issues involved in the Corrib project and raised by Shell to Sea. It offered token recommendations, which served more to cloud the real issues than to deal with the glaring problems.

Re-routing the pipe?
The report’s main recommendation was the re-routing of the upstream pipeline to address the issues of proximity to housing. In a contrived attempt at reasonableness Shell announced that it now intends to re-route the contentious pipeline. The word ‘reroute’ however remains ambiguous. When pushed on Mid west radio station Shell deputy managing director Terry Nolan conceded that the upstream pipe might still could go through Rossport. Rerouting of the pipeline not only potentially moves the problem to another community but also fails to address the core demand of the campaign that is named Shell to Sea; namely that Shell processes the gas at sea.

Local development fund;
Among Cassell’s other recommendations was the establishment of a local development fund, the employment of people and purchase of services locally, local infrastructural enhancements, notably on roads. The suggestion of a ‘local development’ fund has been met with general contempt from local and national Shell to Sea organisers as representing little more than Shell throwing a few crumbs from the table. Shell and its consortium partners own 100% of our gas, they pay no royalties and the little tax (25%) can be written off against costs. One of the core demands of the campaign is the renegotiation of the ‘deal’ so that the gas benefits us instead of lining the pockets of a huge multinational corporation.


One of the most insulting and blatantly wrong parts of the report is the section where Cassells categorises the type of people in the local community. He asserts that he encountered three types of people in the area (i) those who support the project and have always done so, (ii) those who support the project but have genuine concerns, and finally (iii) those who are opposed to all development. The clear attempt to paint those who are fighting for the survival of their community as being opposed to development or as having concerns that are not genuine is contemptible. The portrayal of opponents of the current project as a vocal minority is also unfounded. Erris Shell to Sea recently conducted a door-to-door ‘canvas’ of over 2,500 homes in Erris handing out information on the project and its effects. The overwhelming response was one of support. Out of 2,500 homes approximately fifteen did not support the campaign. A poll conduced by a local newspaper last year found that 80% of those polled supported the demand of Shell to sea.

The Long Walk;
Local Shell to Sea campaigners, members of Rossport Solidarity Camp and supporters recently undertook an epic cross-country walk from outside Shell’s semi derelict compound in Rossport to Dublin city. Almost three hundred people took part in the walk along the way with eight people walking the whole way. The walk, which took just under two weeks saw campaigners walk over 300km stopping in towns along the way holding public information meetings, talking to people and handing out information about how Corrib affects us all. The walk ended in Dublin on Saturday 12th of August at the G.P.O. on O’Connell street. The overwhelming response encountered by walkers was one of support and solidarity.

Rossport Solidarity Camp August Bank Holiday Organising Weekend;
While some of us were tramping the roads to Dublin the Rossport Solidarity Camp hosted a weekend of organising on the August bank holiday weekend. The gathering followed on from our very successful one-year anniversary gathering on the June bank holiday. The gathering saw those interested in organising around social justice and environmental issues gather at the camp to help out with preparing the camp for winter and meetings about how to further the aims of the campaign, specifically raising the issue of the ownership and control of our natural resources. We are holding a building week from 18th –22nd of September. If you are interested in helping please get in touch. (