This summer, the Camp for Climate Action will be held in ‘Megawatt Valley’ near Leeds, one of the most industrialised areas of the UK and home to the Drax, Eggborough and Ferrybridge coal-fired power stations.

From 26th August - 4th September, the camp promises education about climate change and sustainable living, with around 150 workshops scheduled, ranging from practical building and permaculture activities to the advanced science behind climate change. Workshops include analysis of the problems and causes of climate change and strategies on how to confront it - both practically on a grassroots level and politically. Those holding the workshops range from grassroots community activists to internationally-known academics, and from MPs to representatives of environmental NGOs.

During the time of the camp there will also be a Reclaim Power mass direct action against Drax power station (the UK's largest single emitter of CO2 emissions) on August 31st, as well as opportunitites to discuss resistance to nuclear power, the aviation industry, mining and road building schemes and corporate sponsored damage to the environment. The camp will be held on a legally occupied site, and aims to demonstrate practical solutions in action. Power usage will be minimised and the site will be powered by alternative energy sources.

Recently on 18th July climate change activists occupied a lighting tower at Didcot power station in Oxfordshire. Three climbers scaled the tower and unfurled a 50-foot orange and black banner with the words 'Climate Crime' [see pics]. Just prior to that, July 15th was an 'International Day of Direct Action for Climate Justice, against Climate Change and the G8' [see action roundups 1 | 2 | 3 | 4] which coincided with the G8 Summit in Russia. In London, Tulchan Communications, a public relations firm that works for Drax power station, was forced to deny it had been sacked by Drax for failing to make it look good, after a spoof press release was circulated [report]. See also: Climate Action News Sheet: June 06 | July 06 | Social Centers meeting at the climate camp 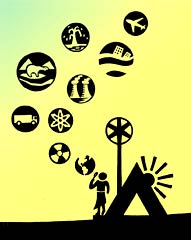 For those coming from Nottingham

Nottingham people are setting up a bit of the Climate Camp as the Reuse Reduce Recycle area! Come along! For more info email:

The amazing programme of over 150 workshops is now online.
Check it out at

If you haven't already decided to come then this will convince you!