Protests against the Israeli assult on Lebanon

The Israeli war of agression against Lebanon has now been going on for almost four weeks and there have been two protests against it in Sheffield, the first one was held on 22nd July and it involved a spontaneous march around the city cente in a downpour and the second was held on 2nd August, it involved a five-minute sit down protest in Pinstone Street and a speech from Jews against Zionism. On 5th August many people from Sheffield attended the London demo against Israeli attacks.

Israel has been targetting civilians, journalists, the UN and ambulances using cluster bombs, depleted uranium munitions, bunker busters flown in via Scotland and a catalogue of other illegal weapons, the USA is the main source of Israeli weapons. According to UNICEF: "Thirty per cent of those who have died are children and 45 per cent of those who are displaced are children".

The capture of two Israeli soliders, which has been used by Israel to justify the attack on Hizballah, has been shown to be a pretext: "Israel's assaults on the Occupied Territories and Lebanon were planned well in advance with the full knowledge and approval of the US." The Israeli government was given the green light to attack Lebanon by the United States and the other states attending the G8 in Russia. The US-Israeli goal for Lebanon appears to be, as a minimum, regime change or worse, total annihilation, as with the wars in Iraq and Afganistain the role of oil appears to be key. Wider Middle East war was predicted at the end of June and the unfolding events appears to be part of an imperialist carve up of the Middle East.

One response, from a branch of the CNT in France has been to say: "Just as we firmly denounce this military escalation, calling for an immediate cease-fire, and an end to the bombings, and withdrawal of Israeli troops from Lebanon and the Occupied Palestinian Territories, we believe, as internationalist workers, that one of our urgent tasks is to support the development of a third camp - the camp of the workers - in the Middle East, at one and the same time against imperialist domination and against Islamist oppression." 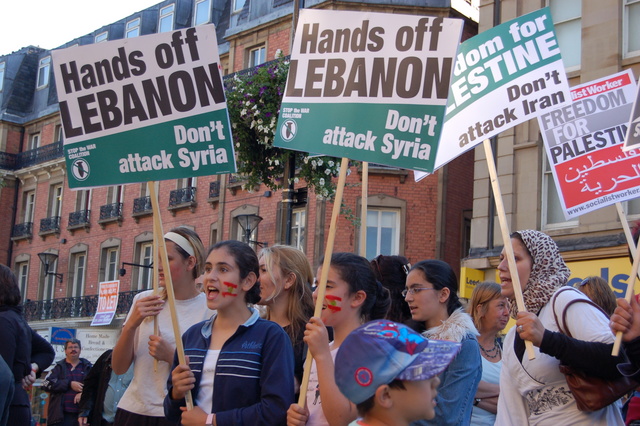